Home Lifestyle Health Women in labour given virtual reality to ease pain of childbirth By... 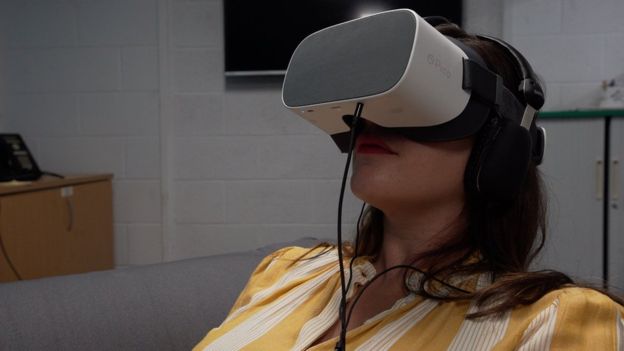 Women in labour are being given virtual reality headsets to see if they can help manage the pain of childbirth.

University Hospital of Wales in Cardiff is carrying out a trial and it could be rolled out across Wales, if successful.

Mother-to-be Hannah Lelii, who tested the kit ahead of the birth of her first baby this month, likened it “to a simulator”.

“It’s genuinely 360 degrees, so when I turn, I’ve got the view that would be behind me or to the side of me,” she said.

“It helps to get me in a state of relaxation.”

The health board will arrange a feedback session in future to gauge the response of the first raft of new mums to trial the headsets.

Ms Hardacre, the head of midwifery for Cardiff and Vale health board, said: “It provides us with an opportunity to do something really different, something innovative, something that’s not being used elsewhere.

“There’s a great opportunity particularly to use this with women in early labour, to try and help them with some breathing and relaxation and take them out of the moment.”

Ms Lelii, who described herself as a “massive fan” said choice “is a big word with mums going into labour”.

Developers Rescape charge about £4,000 per headset each year.

“It’s moved slowly out of the gaming arena and now into therapies,” said co-founder Glenn Hapgood.

“A hospital stay is never an enjoyable one. So even if you look at it from a therapy point of view, just taking people away from the uncomfortable environment they’re in – it’s a very easy solution to have.”

Ms Hardacre said it also had the potential to be used with women who previously had traumatic birth experiences.

She said headsets had been given to women coming in for labour inductions, and the kit was best used during the early stages of labour as women were more in control.

“For things like early labour at the moment we can offer water, breathing and relaxation,” she added.

“Virtual reality just brings another dimension to that.”

Fed Chairman Jerome Powell: ‘We may well be in a recession’