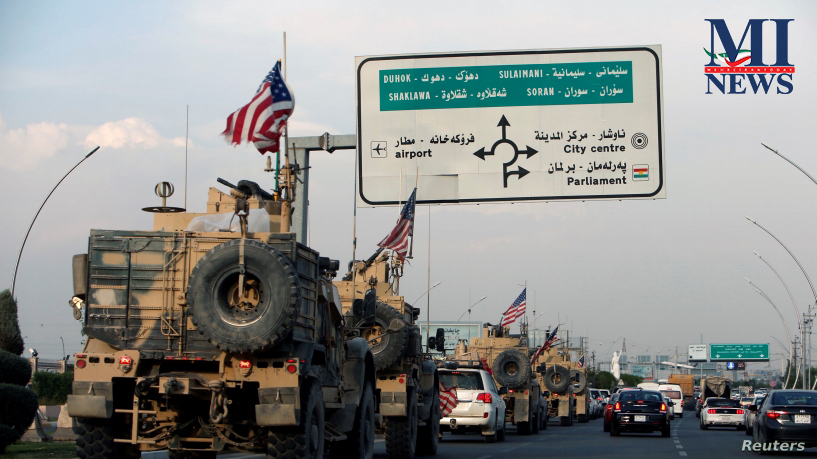 The U.S. is considering keeping some troops near oil fields in northeastern Syria to protect them from being captured by Islamic State militants, Defense chief Mark Esper said Monday.

A convoy of more than 100 vehicles with U.S. troops crossed into Iraq  from Syria on Monday, part of the broader withdrawal from northern Syria ordered by President Donald Trump. But Esper said that some American forces were still patrolling near the oil fields alongside Kurdish-led Syrian Democratic Forces.

The Pentagon leader said no long-term decision has been made “with regard to numbers or anything like that” and no plan presented to Trump. On Sunday, Trump said on Twitter, “We have secured the oil.”

Esper said, “We presently have troops in a couple of cities that [are] located right near that area. The purpose is to deny access, specifically revenue to ISIS [Islamic State] and any other groups that may want to seek that revenue to enable their own malign activities.”

Trump’s troop withdrawal has angered Kurds in northern Syria, where Kurdish fighters have fought alongside U.S. forces against Islamic State terrorists. But Trump said the U.S. had no stake in Turkey’s offensive against the Kurdish fighters, which Ankara considers as allies with Kurdish separatists fighting for autonomy in southeastern Turkey for the last three decades.

The U.S. last week brokered a five-day cease-fire with Turkey in the region to give the Kurdish fighters a chance to move away from the border where Turkey wants to impose a 32-kilometer-wide “safe zone.”

But Turkish President Recep Tayyip Erdogan reiterated Monday that his offensive against the Kurdish fighters would resume if they have not pulled back from the Turkish border by the time the pause in the conflict ends Tuesday night.

With Trump’s withdrawal of most U.S. troops, Russia, an ally of Syrian President Bashar al-Assad, has stepped into the vacuum in northern Syria. Even though Turkey is a NATO ally of the U.S., Erdogan is meeting with Russian President Vladimir Putin in Moscow to plot their strategy in Syria.

Erdogan, without elaborating, told a forum in Istanbul on Monday, “We will take up this process with Mr. Putin and after that we will take the necessary steps” in northeastern Syria.

As U.S. armored vehicles drove out of Syria through the Kurdish-dominated northeastern city of Qamishli on Monday, residents hurled potatoes at the Americans, shouting in English, “No America,” and “America liar.”

Near the town of Tal Tamr, protesters late Sunday raised banners against departing U.S. troops. One man blocked the path of a U.S. van with a poster reading: “Thanks for U.S. people, but Trump betrayed us.”

Trump has said the troop withdrawal was necessary for the U.S. to “end endless wars” in the Middle East. The Pentagon is moving its Syrian contingent of more than 700 U.S. troops to Iraq, not sending them “home” as Trump had tweeted they would be. Esper said the troops would help defend Iraq and could still conduct antiterrorist raids in Syria on Islamic State insurgents.

The U.S. currently has about 5,000 troops in Iraq under an agreement between Baghdad and Washington. The U.S. had pulled out in 2011 when combat operations ended there, but went back in three years later when Islamic State took over large parts of the country before later losing what it had gained.

While the Kurdish withdrawal from the border region is occurring, both Kurdish and Turkish leaders accused each other of violating the cease-fire with scattered attacks.

The Kurds said Turkey had shelled one village at dawn Monday and contended that the U.S. had not forced Ankara to adhere to the terms of the cease-fire. Turkey accused the Kurds of 30 live-fire violations during the four days of the purported pause in hostilities, including an attack that killed one Turkish soldier.

Experts: China Could Be ‘New Road’ for North Korea if US...