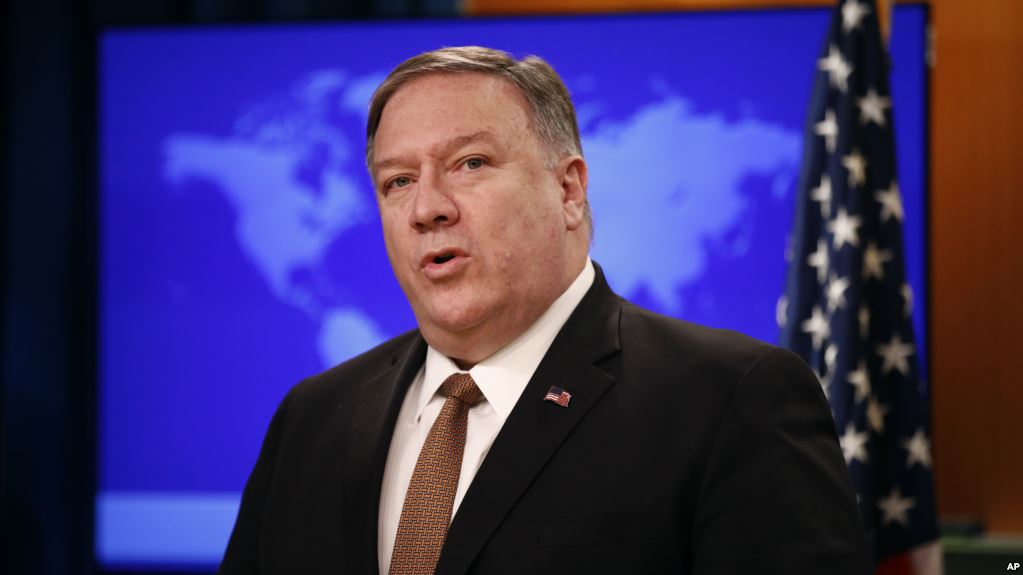 WHITE HOUSE – For the first time, the United States is designating a part of another government as a terrorist organization, targeting Iran’s Revolutionary Guards (IRGC), which is the Islamic Republic’s most powerful security organization.

“This unprecedented step, led by the Department of State, recognizes the reality that Iran is not only a State Sponsor of Terrorism, but that the IRGC actively participates in, finances, and promotes terrorism as a tool of statecraft,” President Donald Trump declared in a statement. “The IRGC is the Iranian government’s primary means of directing and implementing its global terrorist campaign.”

The U.S. action, which takes effect in one week and includes the IRGC’s elite secretive Quds Force, means it will be a federal crime to provide any type of support to the IRGC.

The move “makes crystal clear the risks of conducting business with, or providing support to, the IRGC,” according to Trump’s statement. “If you are doing business with the IRGC, you will be bankrolling terrorism.”

Minutes after the announcement from the White House, Secretary of State Mike Pompeo took to the podium at the State Department to elaborate, stating the IRGC “organizes and executes terror campaigns around the world.”

U.S. officials, in comments to reporters, are also referring to the IRGC as a “death cult” that is the true face of Iranian foreign policy.

“The leaders of Iran are racketeers, not revolutionaries,” Pompeo told reporters, saying with Monday’s announcement Washington is sending a clear message that the U.S. is bringing all pressure to bear for Iran to stop its “outlaw behavior.”

Pompeo declined to say, when asked by a reporter, whether the terrorist designation means that the U.S. military will target IRGC leaders the same way it does those of the Islamic State group.

Iran responded Monday to the U.S. action by putting U.S. military forces on its list of terror groups. Iranian Major General Mohammed Ali Jafari had earlier warned that American forces in the Middle East “will no longer enjoy calm” if the Trump administration went ahead with the action against the IRGC.

“As a matter of policy, we do not discuss adjustments to force protection levels or measures for operational security reasons,” says U.S. Defense Department spokeswoman Navy Commander Rebecca Rebarich, adding that the military “has taken prudent measures to ensure the safety of our forces around the world and maintain our readiness to carry out our missions.”

Several top U.S. intelligence and defense officials are believed to have opposed the designation, fearing that Iranian hardliners would push for operations against Americans overseas, especially special operations and paramilitary forces.

Some analysts, however, expect Iran will react with restraint.

“They can’t politically in Iran do nothing,” says Middle East Institute Senior Fellow Alex Vatanka. “But are they going to get out there and ask their proxies in Iraq or elsewhere to start targeting and firing off missiles at U.S. bases? I doubt that very much.”

Vatanka tells VOA the Iranians are not interested currently in escalating the situation.

“Their fundamental policy is to wait Trump out” and stay within the nuclear deal that the United States pulled out of last year, he says.

Trump’s action coincides with the anniversary of his withdrawal from the 2015 Joint Comprehensive Plan of Action (signed by Iran with the U.N. Security Council permanent members, plus Germany and the European Union) and the U.S. president’s move to reimpose sanctions that had crippled the Iranian economy. It also comes on the eve of Israeli parliamentary elections that will decide the fate of a key Trump ally, Prime Minister Benjamin Netanyahu.

“They don’t think it’s coincidence. This isn’t just about Israel. This is about supporting Netanyahu specifically,” which is the view in Iran, according to Vatanka.

What is certain is that the action significantly tightens the noose around the IRGC, which is a substantial part of the Iran’s economy and its political system.

The IRGC “designated in its entirety just will create more second-guessing among companies and countries that want to do business in Iran,” says Vatanka.

Biden ‘optimistic’ after call pressing Putin to crack down on Russian-based...