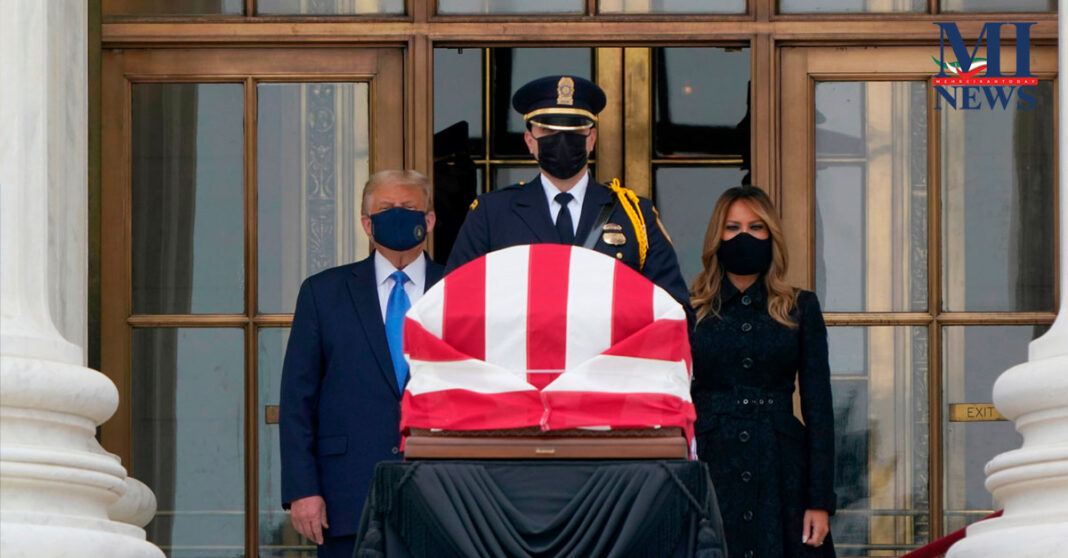 U.S. President Donald Trump was met with boos and chants of “vote him out” as he and his wife, Melania, appeared Thursday at the Supreme Court to pay respects to late Justice Ruth Bader Ginsburg.

The president, wearing a face mask, made no remarks as he stood briefly a short distance from Ginsburg’s casket as she lay in repose at the top of the court building’s steps.

Ginsburg was honored Wednesday with a private ceremony in the Supreme Court’s Great Hall attended by her family and fellow justices. Her casket was then moved to the front steps for the public to file past and pay their respects until Thursday night.

Friday, there will be another tribute to Ginsburg, as her casket will be taken across the street to the U.S. Capitol’s National Statuary Hall, where it will rest on the same wooden platform built for the casket of President Abraham Lincoln after his assassination in 1865. Ginsburg will be the first woman to lie in state at the Capitol.

Civil rights icon Rosa Parks lay in honor in the Capitol’s historic Rotunda after her death in 2005, a distinction given to eminent private citizens.

A statement by the U.S. Supreme Court said Ginsburg will be buried next week in a private ceremony at Arlington National Ceremony.

Chief Justice John Roberts offered the court’s “heartfelt condolences” on the loss of Ginsburg, which he said “is widely shared, but we know that it falls most heavily on the family. Justice Ginsburg’s life was one of the many versions of the American dream.”

Ginsburg died last Friday at age 87 of metastatic pancreatic cancer, ending a 27-year tenure on the nation’s highest court. Her status as leader of the court’s liberal minority, along with her pre-jurist work seeking legal equality for women and girls in all spheres of American, made her a cultural icon, earning her the nickname “The Notorious R.B.G.”

Her death has sparked a political battle over her replacement. Trump and Senate Republicans vowed to name and confirm a new justice before the Nov. 3 presidential election, which would give the court a solid 6-3 conservative majority. Trump announced Tuesday that he will name his nominee for the lifetime appointment on Saturday.