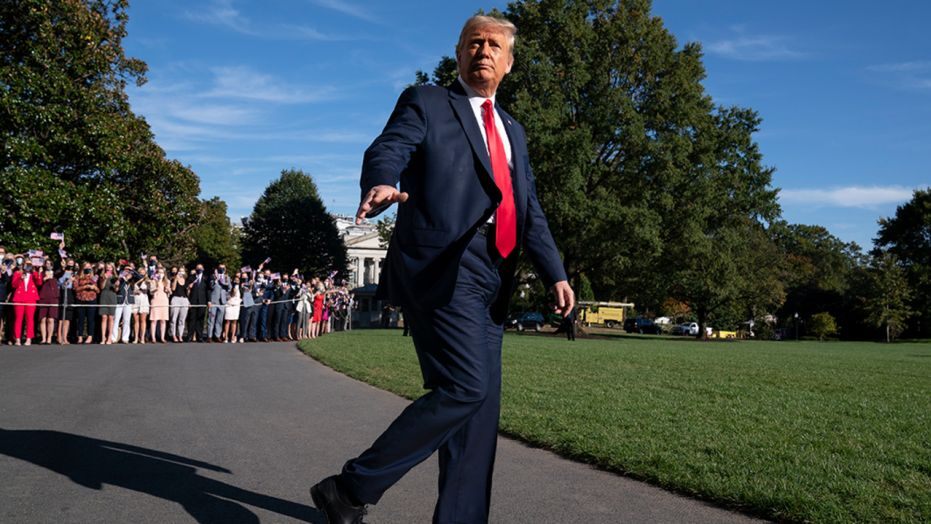 President Trump made a grand entrance at a campaign rally in Iowa on Wednesday night, with Election Day less than three weeks away.

Soon after Air Force One rolled up to the rally site at Des Moines International Airport — with the Survivor song “Eye of the Tiger” playing in the background — the president opted to walk to the rally stage, leading a group of Secret Service agents and official vehicles on route to a hangar where a lively crowd awaited to hear him speak.

“Nobody has ever done (more) for Iowa and the Farm Belt and the farmers and all. … I saved ethanol. Ethanol is safe,” Trump said during a roughly 90-minute speech in front of his supporters, according to the Des Moines Register.

Another video captured thousands of supporters attempting to take photos of the president as a large American flag fluttered during a windy evening in Des Moines.

Attendees reportedly had to agree to a liability waiver acknowledging there was a risk of catching COVID-19 at the rally, according to the paper. The president was diagnosed with the virus roughly two weeks ago — but his physician said Saturday that Trump was no longer at risk of transmitting the virus.

Nevertheless, a billboard set up outside the Des Moines airport earlier this week — that was paid for by the Rural America 2020 campaign — read, “Trump COVID superspreader event,” with an arrow pointing to the airport.

Trump won Iowa handily during the 2016 election, but a poll released last month showed a tight race between him and Democrat Joe Biden.

The former vice president and Trump were tied at 47% among likely voters in Iowa, according to a Des Moines Register/Mediacom poll released Sept. 22.

During his speech Wednesday, Trump also cited a poll released earlier in the day by Focus on Rural America that showed him leading Biden by 6 percentage points, 50% to 44%.

“For me to only be up six, I’m a little bit concerned, I’ll tell you that,” Trump said, according to the USA Today. “Because nobody’s going to do for Iowa what I did for Iowa.”

“Vice President Biden, you owe the people of America an apology because it turns out, you are a corrupt politician,” Trump said, according to the paper. “Let’s face it, Joe is shot.”

The president is set to hold more rallies in Georgia, North Carolina, Florida, and Wisconsin later this week, reports said.

Harvey Weinstein sentenced to 23 years in prison after addressing his...