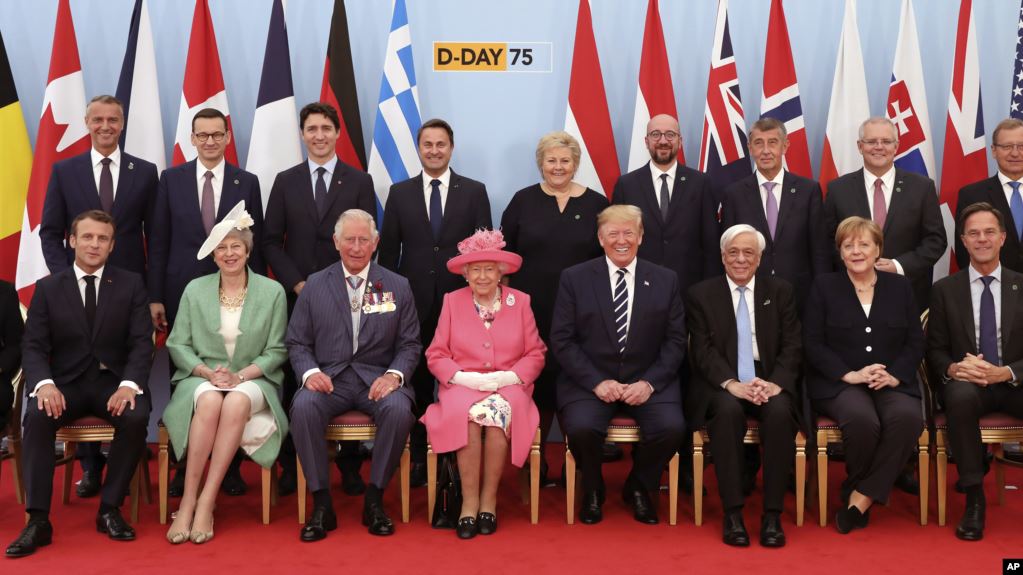 Britain’s Queen Elizabeth II, accompanied by The Prince of Wales, pose for a photograph with leaders of the other Allied Nations ahead of the National Commemorative Event commemorating the 75th anniversary of D-Day, in Portsmouth, England, June 5, 2019.Share

Roderick James contributed to this report.

PORTSMOUTH — U.S. President Donald Trump joined Queen Elizabeth Wednesday in the southern British city of Portsmouth to commemorate the 75th anniversary of D-Day, the start of the heroic Allied invasion of the Normandy beaches in France that led to the defeat of the Nazis and eventually the end of World War II.

More than a dozen world leaders joined them, including British Prime Minister Theresa May, French President Emmanuel Macron and Canadian Prime Minister Justin Trudeau, all of whom extolled the bravery of the young troops who were part of what is still history’s largest amphibious attack, 7,000 ships and landing craft headed across the English Channel to confront the Germans.

As 300 aging D-Day veterans, all now in their 90s, listened, Trump recited a prayer President Franklin D. Roosevelt delivered on radio on D-Day, including the war-time president’s professed belief in the virtue of the invasion.

“The enemy is strong,” Roosevelt said. “He may hurl back our forces, but we shall return again and again; and we know that by Thy grace, and the righteousness of our cause, our sons will triumph.”

Queen Elizabeth said she thought that perhaps the 60th anniversary of D-Day 15 years ago would be the last such commemoration.

But she said, “The wartime generation — my generation — is resilient, and I am delighted to be with you in Portsmouth today.” She said that many of the invading Allied troops “would never return, and the heroism, courage and sacrifice of those who lost their lives will never be forgotten. It is with humility and pleasure, on behalf of the entire country — indeed the whole free world — that I say to you all, thank you.”

German Chancellor Angela Merkel said it was a “gift of history” that she was able to participate in the anniversary ceremonies. She told reporters that “this unique military operation eventually brought us the liberation from the Nazis.” She said the June 6, 1944, invasion and Germany’s defeat a year later set in motion the “reconciliation of Europe and the entire post-war order.”

Trump joined in giving a standing ovation to the World War II veterans gathered on stage as the commemoration began. The ceremony included an hour-long performance recounting wartime events and a fly-by of historic and modern military aircraft.

A recording of the stirring speech British Prime Minister Winston Churchill delivered in parliament in 1940 was piped in.

A 99-year-old D-Day veteran, John Jenkins, told the crowd, “It is right that the courage and sacrifice of so many is being honored 75 years on. We must never forget.”

Trump left Britain for Ireland after the ceremony to meet with Prime Minister Leo Varadkar and spend Wednesday night at his golf resort in the village of Doonbeg.

Trump is traveling to Normandy for more D-Day remembrances on Thursday.

The U.S. leader deployed a mix of diplomacy and barbs in his joint news conference with May in London Tuesday.

Trump said the United States is committed to a “phenomenal trade deal” with Britain as the country prepares to leave the European Union.

He also praised May, who is stepping down as Conservative Party leader on Friday after failing to secure a deal to split from the EU.

But Trump described opposition Labor leader Jeremy Corbyn, who has been critical of Trump, as a “negative force,” and said he would not meet with him during his visit. Trump also renewed his criticism of London Mayor Sadiq Khan, who wrote in The Observer newspaper that welcoming Trump for a state visit was “un-British.”

May said she supported a bilateral trade deal. She praised the economic and trade relations between the countries as one that “helps to ensure there are jobs that employ people here in the U.K. and in the United States, that underpins our prosperity, and our future.”

But analyst Jacob Parakilas of Chatham House said the chances of achieving that trade deal anytime soon is slim.

He said with Brexit still uncertain, there was a pretty limited chance of anything substantive emerging, as well as “the inability to determine what a future U.S.-U.K. trade relationship will look like” without the resolution to the question of whether Britain will remain in the customs union or the single market with the European Union.