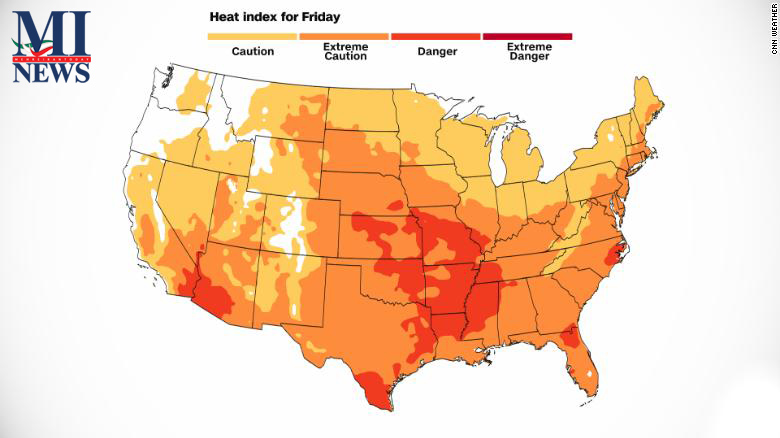 Scorching heat compounded by suffocating humidity is expected to persist through the end of the month in many parts of the US, where millions will likely endure temperatures in the triple digits.

More than 80 million Americans from the West to New England were under either heat warnings or advisories as of Friday morning.
“Record-breaking heat is expected over the Northeast US this weekend, while above-average (temperatures) persist in the South Central US,” the Weather Prediction Center wrote Thursday.
The highest temperature recorded Thursday was in Death Valley, California, which hit 122 degrees Fahrenheit, according to preliminary data gathered by the prediction center.
On Friday, highs will soar into the 100s in parts of the Southwest, Central Plains and Mississippi River Valley, the prediction center said. Temperatures also will hit the mid-90s Friday in parts of the Ohio Valley, Mid-Atlantic and Northeast.
But repressive humidity will push the heat index — what the air feels like — even higher in some of these areas Friday and through the weekend. That includes possible heat index values of 105-110 degrees Friday afternoon in St. Louis and Kansas City, and similar numbers in the Northeast in two days, forecasters warned.
Enter your email to sign up for the Wonder Theory newsletter.
The city of Dallas recorded its first heat-related death of the year, a 66-year-old woman who had underlying health conditions, the County Health and Human Services said on Thursday.
In Arizona, officials in Maricopa County, reported that at least 29 people died from heat-related issues since March — the majority of whom were outdoors. It compares with 16 reported deaths during the same period in 2021, the county’s public health department said. Dozens of other deaths are under investigation in the county for heat-related causes.
The dangerous temperatures have pushed state and local leaders to issue heat emergencies and offer resources to vulnerable residents. They are imploring residents to stay hydrated and limit time outdoors as much as possible.
In Philadelphia, officials extended a heat health emergency through Sunday — meaning resources including cooling centers, home visits by special teams and enhanced daytime outreach to people experiencing homelessness will remain available through the weekend.
And in Washington, DC, the mayor also announced a heat emergency effective through Monday morning as temperatures are expected to be 95 degrees or higher. Shelters and cooling centers have also opened to serve those who need them, the mayor said.
The extreme heat in the US has also been mirrored in the deadly condition in Europe, where records have been shattered and the European Forest Fire Information System put 19 European countries on “extreme danger” alerts for wildfires. 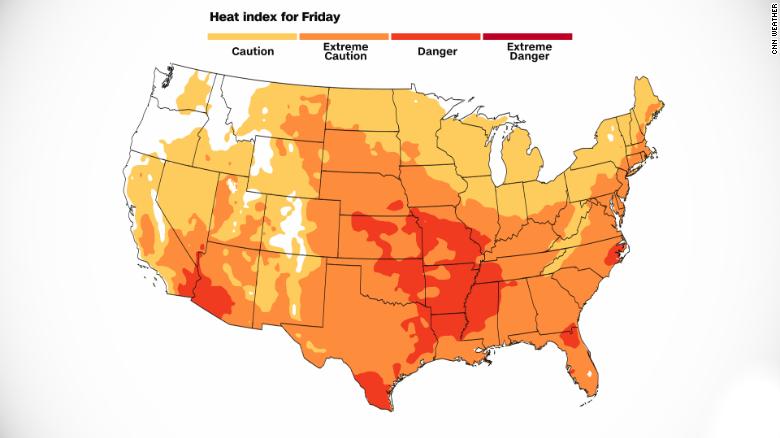 Heat index for Friday
By Thursday morning, 60 daily high temperature records had been tied or broken across the US this week, and “more records are likely to be set over the next week,” the Weather Prediction Center wrote.
Heat index values — the temperature it feels like when heat is combined with humidity — could top 100 degrees in a number of states through this weekend, particularly in the Midwest, the Southeast and on the East Coast. 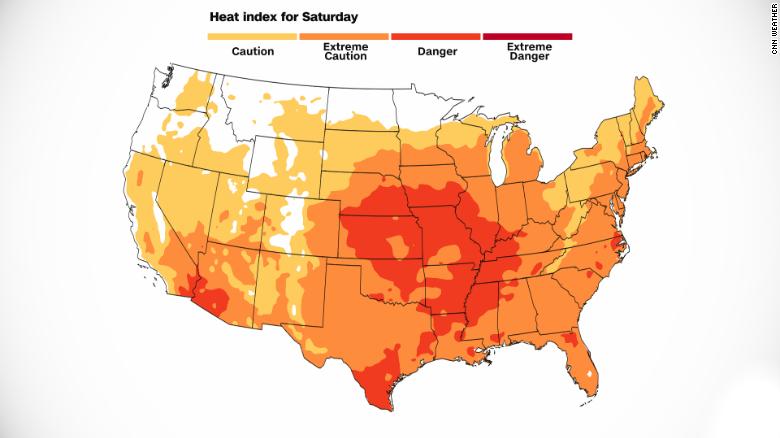 Saturday’s heat index forecast
On Saturday, “sizzling temperatures take hold of the Midwest and Central Plains, with forecast high temps likely to surpass” 100 degrees, the weather prediction center said.
On Sunday, the heat index could climb above 105 in parts of the Northeast and Mid-Atlantic on Sunday, the prediction center said.
Daytime temperatures could top 100 degrees across much of the Southwest over the weekend, with some areas exceeding 110 degrees, according to the center.
The south-central region can expect to see high temperatures in the triple digits every day between Sunday and Thursday, the prediction center noted.
“There is some good news in the medium range (after the weekend) as an approaching cold front brings a brief injection of cooler temps to the Midwest and Northeast, but the core of the intense heat shifts to the South Central US and Pacific Northwest early next week,” the prediction center wrote. 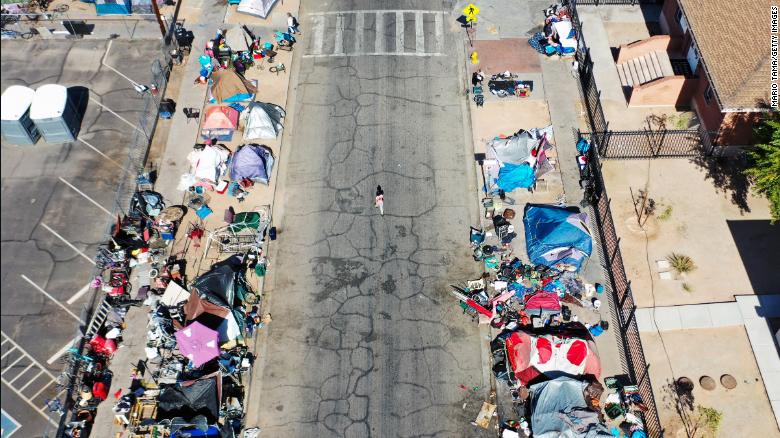 An aerial view of people gathered near a homeless encampment Thursday afternoon in Phoenix, Arizona.

As the high temperatures continue to oppress much of the country, officials are also faced with protecting farmers and their livestock.
In Missouri, the governor declared drought emergency in 53 of the state’s more than 100 counties to allow farmers to use water from state parks. Officials are also considering use the parks to grow hay to help feed the farmers’ animals.
The situation in Texas is so dire that ranchers are running out of water — forcing them to sell their cattle at a rate not seen in more than a decade, according to David Anderson, a livestock economist at Texas A&M University.
The dry, hot conditions are essentially causing grass to die off, severely thinning the pastures where cattle graze, which leaves many ranchers no choice but to send cattle they can’t feed to slaughter.
“A lot of ranchers rely on ponds and tanks that capture rainfall,” Anderson said. “I’ve heard a lot of stories about ranchers running out of water.”