Home Lifestyle The real 10-year challenge: how the hashtag is being used to raise... 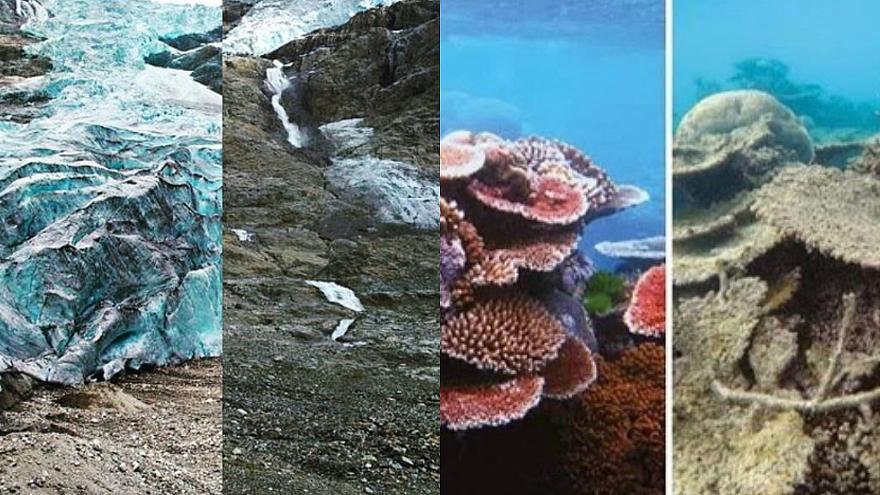 How well have you aged? The viral 10-year challenge, that spread like wildfire on Facebook, Instagram and Twitter this week, gave anyone who has an online social media profile — including celebrities, politicians, and influencers — a platform to do just that and show the world what they looked like 10 years ago.

While many have been quick to call out the challenge as just an excuse to show off, others have found a more creative and fruitful way to make use of the hashtag.

Take a moment today to remember our biggest #10YearChallenge!

We must act now, change our lifestyles and hold our leaders accountable. We may not get more than another 10 years to do so. #GlobalWarming #ClimateChange pic.twitter.com/MNnNgQ0EX9

Documenting climate change one picture at a time

Environmentalist NGOs, activists and institutions around the world — from Greenpeace to the European Commission — took advantage of the publicity surrounding the challenge, which consists of two pictures lined up side by side to show how things have changed, to raise awareness about the consequences of climate change.

Many of the pictures feature the melting of glaciers and ice caps around the globe — a phenomenon that can’t be seen from one day to the next but the contrast is striking when pictures taken a few years apart are compared. This was the case for the Swiss Trift and Rhone glaciers:

The real #10yearchallenge? Climate change. According to @IPCC_CH #SR15, we have just over 10 years to #ActOnClimate before we cause irreparable damage to our planet. Take our free course on #ClimateAction and become a part of the solution. Enroll now! https://t.co/puzQgIiUoQ pic.twitter.com/Ujz7kEAnoH

Some researchers even decided to highlight the extent of the damage caused by climate change.

“A #10YearChallenge actually worth caring about (no disrespect to y’all who somehow look better now than 10 years ago): the world’s glaciers are melting at alarming rates. We’re losing freshwater fast, along with permafrost and precious habitats,” scientist Kristen Weiss wrote.

A #10YearChallenge actually worth caring about (no disrespect to y'all who somehow look better now than 10 years ago): the world's glaciers are melting at alarming rates. We're losing freshwater fast, along with permafrost and precious habitats. #climatechange #seaicemelt pic.twitter.com/J7sXVtX24v

Even professional racing driver Lucas di Grassi joined in with the alternative challenge, calling his followers to action on Twitter.

The only #10yearchallenge you need to care about is actually a long one.. #ClimateChange #climatechangeisreal help the planet install solar PV in your home, eat less meat, drive electric including e-bikes on the daily routine.. ? ⚡️ pic.twitter.com/UeDd7JBOVK

Except 6 months change instead of 10 years and icebergs instead of profile pics. Oh yeah climate change is real. #10YearChallenge https://t.co/RlxkMbdLTd pic.twitter.com/QvBcPySVre

Melting ice isn’t the only effect of climate change that activists have been showcasing. Another recurring theme was the alarming rate at which marine flora and fauna are being affected.

As coral reefs die at alarming rates, places such as the Caribbean have been witnessing an environmental crisis linked to the proliferation of a specific kind of algae, the Sargassum, which piles up on beaches, releasing toxic fumes.

The extinction of animal species, Amazon deforestation and the drainage of lakes all made an appearance, reminding social media users about the gravity of the environmental issue we’re faced with.

A spotlight on forgotten war zones

Others looked back at 2009 to show what many countries that are now ravaged by war looked like just ten years ago.

US coronavirus cases surpass 1 million as projections show deaths could...

Trump says he got the booster shot and dismisses fans who...