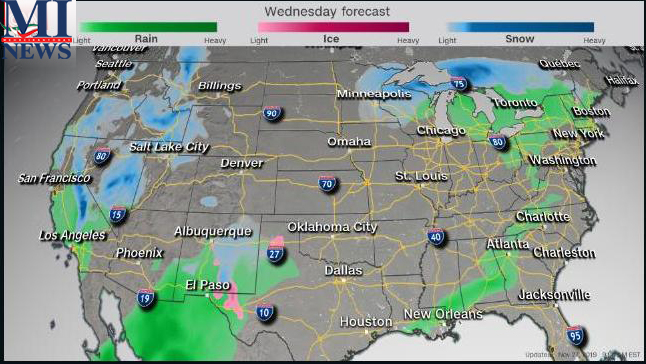 Brutal weather is making pre-Thanksgiving travel unpleasant or downright dangerous across the US, and leaving tens of thousands of people without power.

Two massive storm systems are bringing a combination of snow, rain and high winds as millions of people take to the roads and skies the day before Thanksgiving:
• One system is hammering Western states with rain along the coast and valleys and heavy snow in the mountains.
• Another has already dumped snow and rain over the Rockies and central US and is bringing snow and high winds to the Midwest while pushing colder weather into the Northeast.
Track the storms I Live travel updates
High winds — with gusts above 35 mph in places like San Francisco, the Sierra Nevada range, Salt Lake City and Chicago — are likely to delay some of Wednesday’s air travel. Wind advisories across the country cover nearly 90 million people.
“Not every plane is going to get out of (Chicago) on time,” CNN meteorologist Chad Myers said of the winds. “No question that planes are going to be delayed” in other parts of the country, too, he said.
More than 300,000 homes and businesses were without power across the country Wednesday, largely due to winds. As of 1:30 p.m. ET, most of the outages were in Michigan (99,000), California (68,000) and Ohio (65,000), according to utility tracking site poweroutage.us.
And snow, whether already on the ground or falling now, is making highway travel difficult in the central US and Midwest. Officials in several states have reported slick conditions including in South Dakota, where roads along and south of Interstate 90 were paved with ice or snow.
“Winter driving skills are needed in northern Iowa today. Buckle up, slow down and give all your attention to the task of driving,” Iowa’s Department of Transportation tweeted. 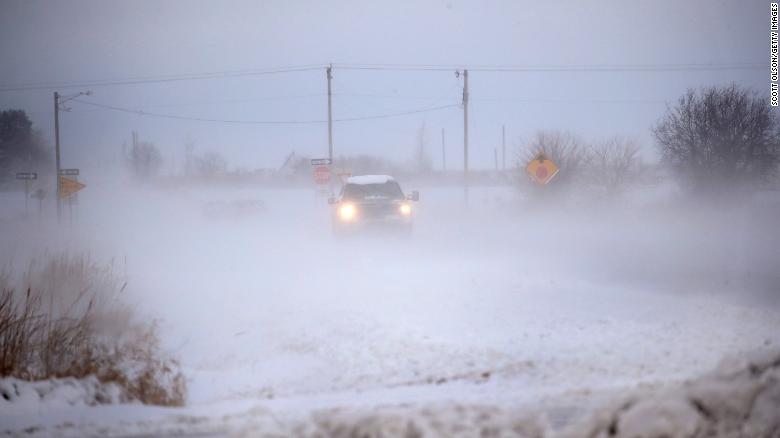 A traveler drives down an ice- and snow-covered road in Mason City, Iowa, on Wednesday.

Powerful winds and heavy rain in the West

A bomb cyclone — a type of rapidly strengthening storm — began dumping rain over parts of the West on Tuesday night, and more rain will fall Wednesday. Winter storm watches, warnings and advisories touch parts of every western state from Arizona to Montana.
The storm was “historic” and “unprecedented” because it set November low-pressure records in parts of Oregon and Northern California, the National Weather Service said.
Lower pressure typically will yield strong winds — as this storm did. Hurricane-strength winds — sustained winds of 85 mph and gusts to 106 mph — hit Cape Blanco, Oregon, on Tuesday afternoon, the weather service said. 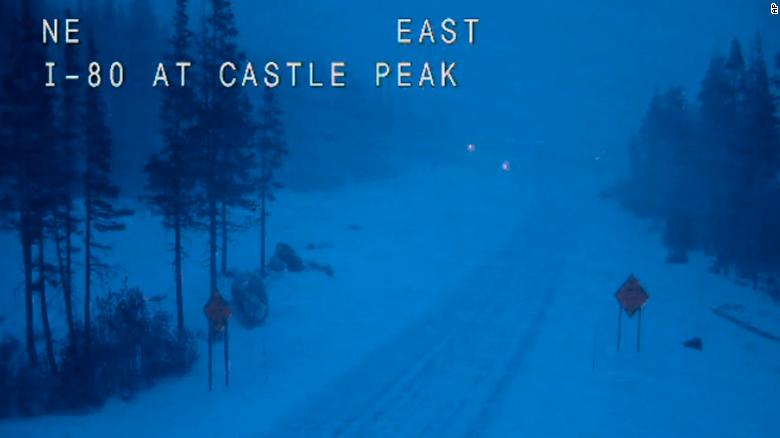 In this still image taken from a Caltrans remote video traffic camera, eastbound Interstate 80 is empty Wednesday morning because of closures and restrictions in Soda Springs, California.
It’s also begun to dump heavy snow — with some mountain ranges in eastern California measuring snow piles in feet Wednesday, the weather service said.
In Oregon, Department of Transportation officials reported whiteout and blizzard conditions, urging drivers in affected roadways to pull over. In Arizona, the weather service warned of “impossible travel conditions” Thursday and early Friday with heavy and drifting snow.
Significant travel delays and road closures because of dangerous travel conditions were also expected across California, the service said. In Santa Barbara County, officials warned that heavy rain could cause dangerous debris flows at and below the areas burned this week by the Cave Fire.
“If you live or are near creeks and streams be aware that they may experience high flows and can rise quickly. If a debris flow occurs, and it is unsafe to leave, or you are unable to leave, go to high ground,” the county said.

Meanwhile, another major storm is making its way over the Midwest Wednesday, delivering heavy snow and high winds, making road travel difficult and knocking out power for thousands of people.
That storm unleashed powerful winds and dumped snow and rain over the Plains on Tuesday and moved over the upper Midwest on Wednesday, dumping snow from Nebraska to Wisconsin, CNN meteorologist Michael Guy said. 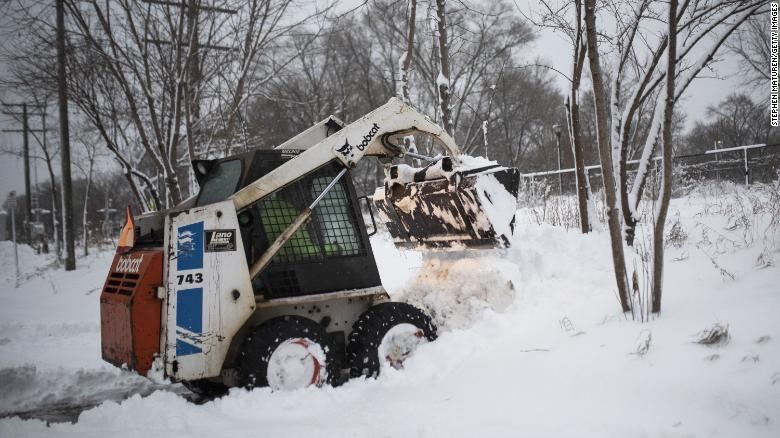 A man plows snow Wednesday after a blizzard struck Minneapolis.
Up to 9 inches of snow already had fallen in Minneapolis on Wednesday morning.
Parts of Minnesota, Wisconsin and the Upper Peninsula of Michigan will see up to a foot of snow — with some areas receiving up to 14 inches, the weather service said. “Gusty winds will also cause blowing and drifting snow, as well as reduced visibility causing whiteout conditions,” it said.
In New York, the fierce winds could ground the balloons in Macy’s Thanksgiving Day Parade on Thursday. The balloons can’t be flown when sustained winds exceed 23 mph and gusts exceed 34 mph, per New York City regulations.
There’s good reason for that. In 1997, the Cat in the Hat balloon injured four people after intense winds forced it astray. 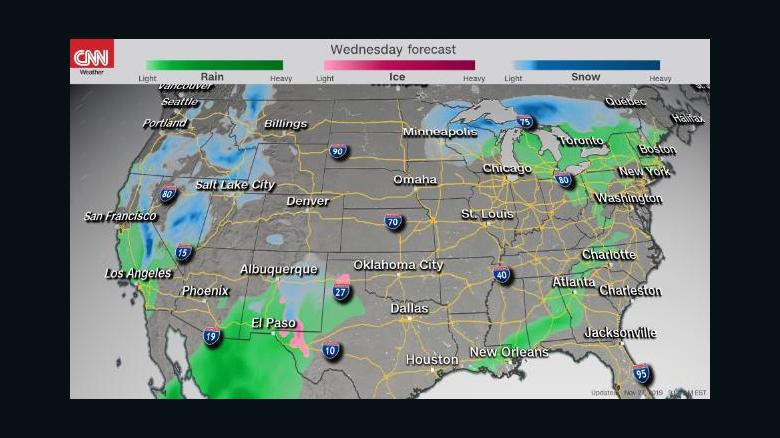 This map forecasts Wednesday’s rain and snow, but doesn’t account for snow already fallen, or reflect high winds expected across much of the country.

High winds already have had some disastrous effects.
In Oklahoma, officials reported at least 26 wildfires, activating the State Emergency Operations Center. Strong southwest winds pushed a “rapid spread” of fires, the weather service in Norman, Oklahoma, said.
Late Tuesday, shifting winds hampered firefighters’ efforts and pushed a fire toward the town of Fargo, in the northwestern part of the state.
Original Source

May 29, 2020
Twitter put a tweet from President Donald Trump behind a warning label early Friday, stating that he had violated its rules against glorifying violence...

May 29, 2020
There are more than 5.8 million infections of COVID-19 around the world, with more than 360,000 deaths. Some countries are starting to loosen restrictions initiated...

May 29, 2020
The midwestern U.S. city of Minneapolis remains on edge and the National Guard was called out to maintain order following another night of violent...
0FansLike
0FollowersFollow

US Surgeon General: US Cases Are Where Italy Was 2 Weeks...