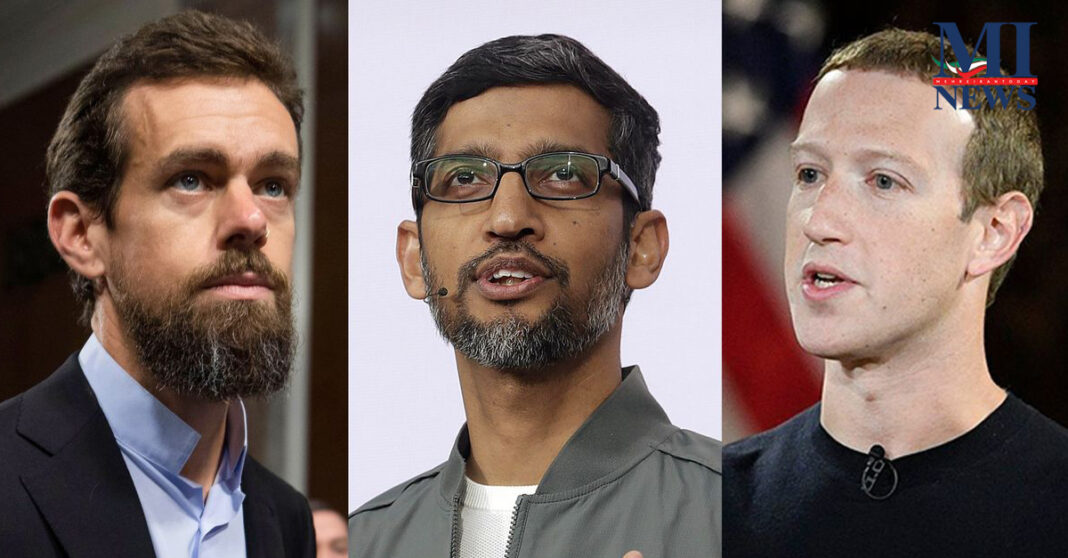 Chiefs of the largest social-media companies tangled with U.S. senators over their role in public discourse amid a contentious election that has stoked bipartisan criticism of the companies’ policies.

Facebook Inc. Chief Executive Mark Zuckerberg, Twitter Inc. CEO Jack Dorsey and Sundar Pichai, CEO of Google and YouTube owner Alphabet Inc., have spent the years since the 2016 election rewriting their policies and taking a more active role in moderating online speech—in part to avoid a spotlight like the one placed on them Wednesday.

Instead, the Senate Commerce Committee hearing reflected deep discontent with social-media platforms’ power and equally deep divisions about how to address it.

Republicans are pushing to update part of a 1996 law known as Section 230 that helps shield internet platforms from liability for user-generated content, claiming it has been misused to censor conservative views.

Sen. Cory Gardner (R., Colo.) questioned Twitter’s decisions to label some posts by President Trump as misleading but not others by Iran’s Supreme Leader Ayatollah Ali Khamenei threatening Israel and denying the Holocaust. “I just don’t understand how Twitter can claim to want a world of less hate and misinformation while you simultaneously let the kind of content that the ayatollah has tweeted out to flourish,” he said.

Democrats also want to review Section 230 but on Wednesday raised differing concerns about the platforms, including asking whether the companies are taking adequate steps to guard against disinformation campaigns in what could be a chaotic aftermath to next Tuesday’s election.

“The issue is not that these companies before us today are taking too many posts down. The issue is that they are leaving too many dangerous posts up,” said Sen. Ed Markey (D., Mass.).

In a series of testy exchanges with senators over the nearly four-hour hearing, which was conducted via webcast, the CEOs expressed varying degrees of openness toward changing Section 230 but denied any political bias.

Sen. Ted Cruz (R., Tex.) accused Twitter of acting as a “Democratic super PAC” when it decided to block tweets of the articles, including by the Post.

“Who the hell elected you and put you in charge of what the media are allowed to report?” Mr. Cruz asked.

“I hear the concerns and acknowledge them,” Mr. Dorsey said, but he denied Twitter was favoring Democratic causes.

The Twitter chief said the company also has policies against the incitement of violence, but he characterized the Iranian leader’s statements as newsworthy “sabre-rattling, which is part of the speech of world leaders.”

“Speech against a country’s own citizens, we believe, is different and could cause immediate harm,” Mr. Dorsey said.

Democrats largely focused on other issues, including how the tech companies share advertising revenue with local news publishers that rely on the platforms to reach readers.

The CEOs said they have changed the way the handled election-related content and worked with publishers. Mr. Zuckerberg said most content on Facebook is positive, such as updates on family events.

Some Democrats said the hearing could have a chilling effect on tech companies’ efforts to block misinformation and hate speech, and accused Republicans of holding it for political purposes in the final days of the race. Sen. Jon Tester (D., Mont.) dismissed the hearing as a “cheap stunt” aimed at pushing the platforms to allow misinformation to remain online and to raise doubts about the election. He charged that the directive to hold the hearing came “straight from the White House.” The White House didn’t immediately respond to a request for comment.

A committee source said the panel authorized subpoenas for CEOs two weeks before the New York Post articles were published. The panel first asked the executives to testify in September and threatened to subpoena them six days later.

Section 230 of the 1996 Communications Decency Act, the hearing’s focus, gives online companies broad immunity from legal liability for user-generated content and wide latitude to control what appears on their platforms.

Senate Republicans are pushing legislationto rewrite the law, and the GOP-led Federal Communications Commission has begun a rule-makingreview that could lead to scaling back liability protections for internet platforms. Sen. Roger Wicker (R., Miss.), the panel’s chairman, opened the hearing by saying said the liability shield has “given these internet platforms the ability to control, stifle and even censor content in whatever manner meets their respective ‘standards.’ The time has come for that free pass to end.”

The tech executives defended Section 230 but signaled some openness to changes in the law. Messrs. Zuckerberg and Dorsey said they strive to balance users’ right to free expression with the need to protect public safety. They argued Section 230 gives them the tools to strike that balance, though they expressed willingness to consider moderate changes, particularly around transparency and accountability.

“I believe Congress should update the law to make sure it’s working as intended,” Mr. Zuckerberg said. “When a private company is making these calls, we need a more accountable process that people feel is legitimate and that gives platforms certainty.”

While Mr. Dorsey backed improving transparency around company practices, he cautioned against changes that could burden smaller tech firms.

“We mustn’t entrench the largest companies any further,” he said, hinting at Twitter’s smaller size relative to Facebook’s.

Mr. Pichai didn’t close the door to change but warned of unintended consequences for businesses and consumers.

He also pushed back on accusations of bias, saying, “Let me be clear: We approach our work without political bias, full stop.”

Some see Google’s YouTube video unit as a significant source of election-related misinformation, and many conservatives contend that Google’s ubiquitous search function is biased against their points of view.

Republicans focused on Twitter’s blocking and Facebook’s limiting of the disputed New York Post articles, which the outlet said were based on email exchanges with Hunter Biden, the Democratic candidate’s son, and provided by allies of Mr. Trump. The Justice Department weighed in Tuesday, writing to the Senate panel that the episodes show the need for Congress to pare back Section 230 immunity.

Mr. Wicker recently introduced legislation with two other Republican senators to curb Section 230’s reach. Their bill’s main provisions would reduce the companies’ latitude to police content by tightening standards for material that can be removed or restricted but would still maintain the protection.

Companies would be free to remove content that is considered lewd or harassing, for example. But the measure would limit the platforms’ ability to censor material deemed “otherwise objectionable” under Section 230. Critics say that provision of the law has given the companies too much leeway. Instead, content could be removed under the GOP bill only for more specific findings of unsuitability, such as being excessively violent.