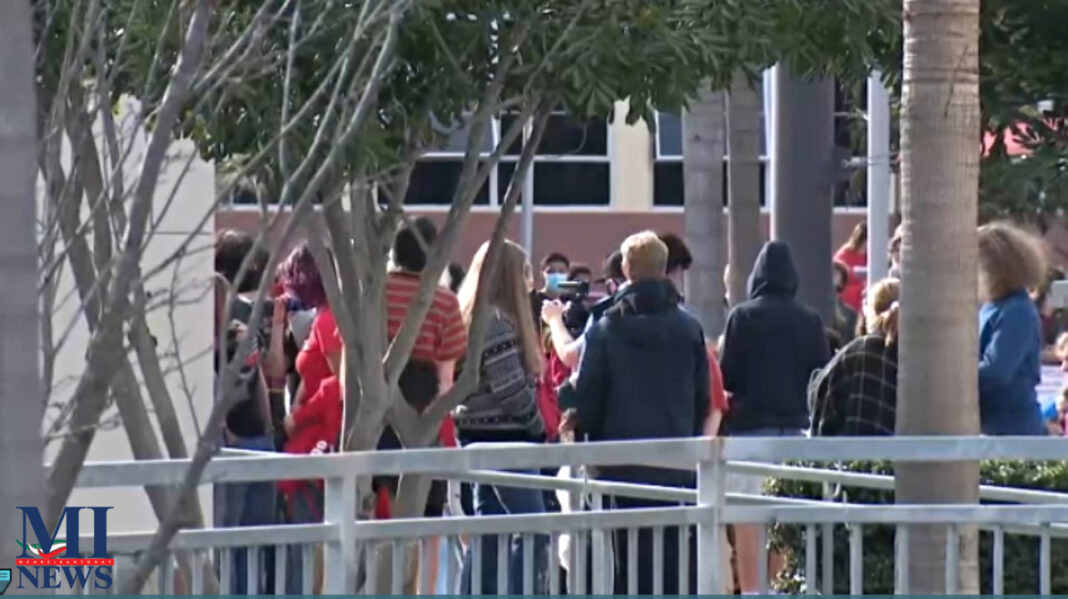 Students across the U.S. are planning walkouts to protest in-person learning amid a national spike in COVID-19 omicron cases.

More than 4,100 schools nationwide were closed as of Tuesday — a slight reduction from the more than 5,400 schools closed last week following winter break, according to community event website Burbio, which tracks school closures in more than 5,000 U.S. school districts. The closures came largely due to increasing COVID-19 cases and related staffing shortages.

In New York City, students at Brooklyn Technical High School made headlines Tuesday after videos posted to social media showed swaths of students leaving a school building in the middle of the day, protesting in-person learning amid an apparent lack of testing for students and staff, according to local reports.

“We don’t feel safe at school,” a Brooklyn Tech junior told The New York Post Tuesday. “It’s pretty much that simple. There are so many cases going around and we think more should be done.”

Sources told the Post that some teachers gave students a green light to leave classes while others said they could face disciplinary action for doing so. Other students at Stuyvesant and Bronx Science also participated in walkouts, according to the outlet.

Newly elected Mayor Eric Adams insisted during a Friday news conference that the “safest place” for children to be is “in school” in response to a question from a reporter regarding the walkouts.

Dr. Sara Bode, a member of the American Academy of Pediatrics Council on School Health, told Fox News Digital last week that she believes schools making an effort to mitigate the transmission of COVID-19 are some of the safest places for children to be right now compared to places in their communities that do not have mitigation strategies in place.

A teacher gives a lesson to masked students in their classroom at Yung Wing School P.S. 124 on September 27, 2021 in New York City. (Photo by Michael Loccisano/Getty Images)

“Of course, it’s not zero-risk to have kids in school. … With this increase in transmissibility, we will likely see an increase in cases in schools, but it’s likely not higher risk than many of the other activities kids participate in when they’re not in school,” she said.

The Boston Student Advisory Council, which is made up of elected Boston Public School (BPS) student leaders, is planning a walkout for Friday.

Massachusetts Gov. Charlie Baker, who has also argued that schools are the “best” places for students to be amid COVID, announced Tuesday that the state has placed an order for 26 million rapid antigen tests to be distributed over the next three months with priority to K-12 schools and other childcare facilities

On the opposite coast, students at Redondo Union High School (RUHS) in Redondo Beach, California, also planned a walkout on Wednesday in protest of in-person classes.

“These guidelines are fine, but what’s the point if they’re not being enforced?” Michael Lee Chang, a senior at Redondo Union High School, told FOX 11 Los Angeles. “The largest clubs are still meeting at lunch indoors. You know, we’re afraid. I’m seeing eight through 18 students missing from each of my classes right now. Most because they’re out from COVID, but some because they’re not comfortable dealing with the current problem of students who test positive for COVID or were exposed to it still attending school.”

RUHS told Fox News in a statement that “all concerns brought forth via social media, in regards to COVID protocols and safety, are addressed directly with the concerned student(s).”

In the Midwest, where the Chicago Public School (CPS) system made headlines amid negotiations with the Chicago Teachers Union (CTU) that ended on Tuesday, students are also planning a Friday walkout.

“We demand our voices are not only listened to or heard but the voice of our concerns are implemented within structures,” a poster shared on social media reads.

The walkout comes after CPS and CTU reached an agreement earlier this week, allowing classes to resume for in-person learning on Wednesday. The agreement, which received narrow approval from CTU members in a vote, will allow schools to return to remote learning if 25% of staff test positive for COVID-19. It also secures access to increased testing and personal protective equipment and enhances contact-tracing measures at all public schools.

Prior to negotiations, union leaders were demanding a return to remote learning until an agreement was reached or COVID-19 cases “substantially” subsided. The union accused CPS, however, of locking teachers out of their online teaching platforms while negotiations were ongoing so that a remote learning option was not possible

The White House announced Wednesday that a dedicated stream of 5 million rapid tests and 5 million lab-based PCR tests will be made available to schools starting this month to ease supply shortages and promote the safe reopening of schools.

The government still doesn’t know how many nursing homes have coronavirus...