Home Sport Simone Biles says she still has the ‘twisties’ and it’s impacting her... 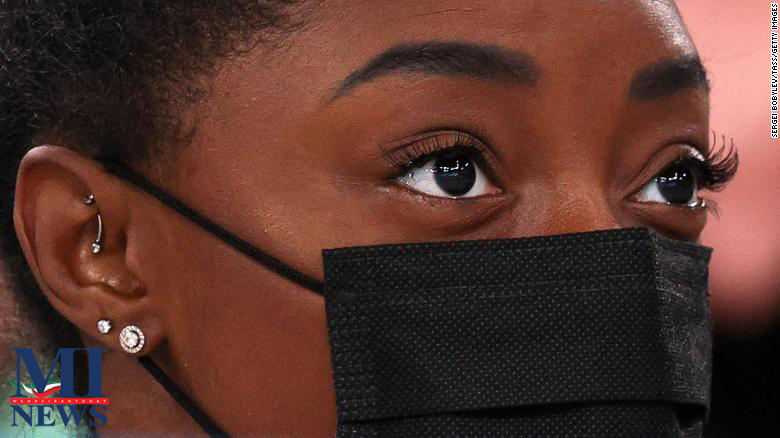 In a series of Instagram stories, Simone Biles shared videos — which since have been deleted — of herself struggling with her dismounts on the uneven bars and answering questions about having the twisties, a mental block in gymnastics where competitors lose track of their positioning midair.

Biles, who withdrew during the team final at the Summer Olympics and then withdrew ahead of Thursday’s all-round final, is scheduled to compete in the four individual events of vault, bars, balance beam and floor exercise. 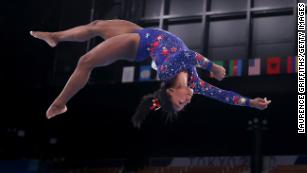 Biles said the recent bout of the twisties began the morning after the preliminary competition. She said she’d been affected by the twisties before, saying in a post, “btw it’s never transferred to bars & beam for me. It strictly likes floor & vault.” But then she added, “but this time it’s literally on every event. which sucks… really bad.”
Biles posted two videos of herself — which since have been taken down — of her on the uneven bars, showing her struggle with dismounts.
In the first video, she says she was supposed to perform one-and-a-half more twists on her dismount. Instead, the video shows her landing on her back on the mat.
Another video shows another dismount, in which she said she still needed to complete another half twist, and she falls to the mat in apparent frustration. 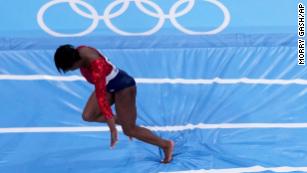 Biles stumbles as she lands during the artistic gymnastics women’s final at the 2020 Summer Olympics on Tuesday
She said the videos were taken Friday morning at practice, and also said in another post, “it’s honestly petrifying trying to do a skill but not having your mind & body in sync.”
Biles said getting rid of the twisties “varies with time” and for her usually lasts two or more weeks, adding that it’s “something you have to take literally day by day, turn by turn.”
Regarding her vault during the team final, Biles says she has “no idea” how she landed on her feet “because if you look at the pictures & my eyes you can see how confused I am as to where I am in the air.”
“I chose to not continue team competition in jeopardizing losing a medal (of any color) for the girls / US also for my own safety and health,” Biles said.
Women’s vault and bars finals are scheduled for Sunday, the women’s floor final is Monday, and the beam final is Tuesday.