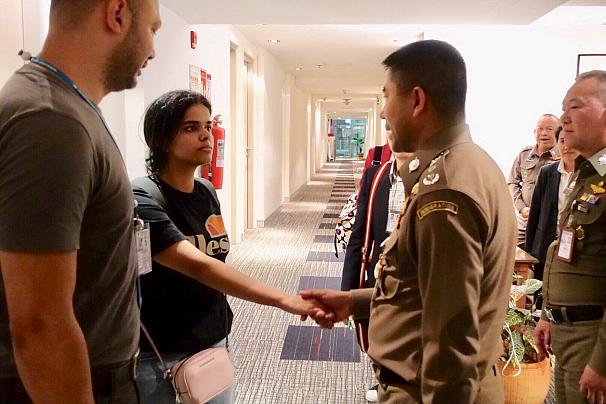 A Saudi woman who fled her family has left the Bangkok airport hotel room where she was staying and is under the protection of immigration officials, the UNHCR told Euronews.

Rahaf Mohammed al-Qunun, 18, who alleges she was abused by her family, had barricaded herself in the hotel room on Monday when Thai immigration officials tried to return her to Kuwait, where her family is.

She has now been moved to a different hotel in the Thai city, Caroline Gluck, a senior regional public officer for the organisation said.

A representative of the UNHCR met Qunun at the airport and discussed the case with Thai immigration officials, a statement from the agency confirmed.

“We and UNHCR will talk to her and ask her what her wishes are, whether she wants to request asylum,” immigration chief Surachate Hakparn told a news conference.

Hakparn said immigration officials were following the law by refusing Qunun entry but said that if she “is to be hurt or punished or killed, we will need to take into consideration human rights principles”.

The 18-year-old was meant to take a flight back to Kuwait City, where her family is, on Monday morning.

Qunun has said she fears that if she goes back to her family they will kill her.

Deputy Asia Director for Human Rights Watch Phil Robertson, who’s been in contact with Qunun, told Euronews over the phone that the young woman had suffered “physical and psychological abuse from her family”.

Robertson said that she is “scared to death, is barricaded in her hotel, and wants the UNHCR to come see her.”

Melissa Fleming, the Chief Communication officer for UNHCR, tweeted that her colleagues in Bangkok were trying to reach Qunun.

Robertson added that the 18-year-old who’s had her passport “confiscated” would like to file for asylum.

The Saudi teen has been in Bangkok airport since Saturday after she was denied entry by Thai immigration officials.

Qunun told Reuters she fled Kuwait while her family was visiting the Gulf country and had planned to travel to Australia via Thailand to seek asylum.

She also said she was detained after getting her plane in Bangkok and told she would be sent back to Kuwait.

“When I landed at the airport, someone came and said he would process the (Thai) visa but he took my passport. He came back with what seemed to be airport security and said that my parents objected and said I must return to Saudi Arabia via Kuwait Airways,” she told Reuters.

A tweet on the Saudi Foreign Ministry official account denied allegations that its embassy had confiscated her passport.

A spokesman for Kuwait Airways told Reuters they had no information about the case.

WATCH: Phil Robertson from Human Rights Watch speaking to Euronews about the case:

Ceremony to Remember Those Killed in Pearl Harbor Attack

UK Has No Plans To Pay Debt To Iran To Free...