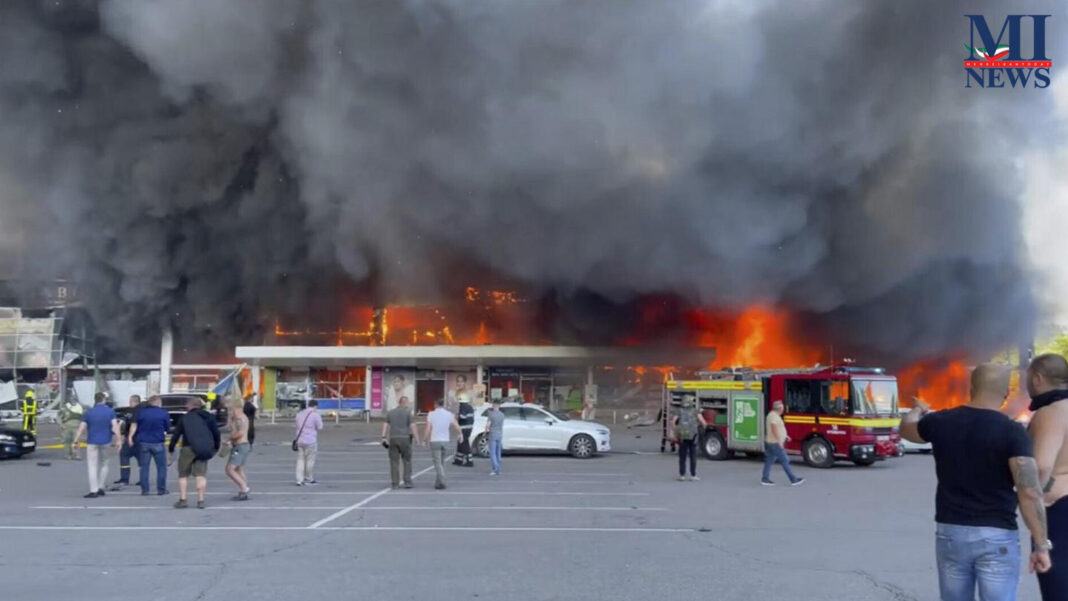 Ukraine said it feared scores of civilians might be dead or injured after a Russian missile strike hit a crowded shopping mall in the center of the country Monday.

More than 1,000 people were inside at the time of the rocket attack, President Volodymyr Zelenskyy said.

“The number of victims is impossible to imagine,” he added in a post on the Telegram messaging app, sharing video that showed plumes of gray smoke rising above a building that was consumed in flames as people and first responders ran in front of it.

The apparent attack hit a shopping center in Kremenchuk, a city in the Poltava region on the banks of Ukraine’s Dnieper River. Dmytro Lunin, head of the Poltava region, said at least 10 people were killed and more than 40 others were injured.

The Ukrainian Air Force Command reported that the missiles were fired from long-range bombers that took off from a Russian airbase north of Ukraine.

NBC News has not verified that claim or the number of any deaths. The Russian embassy in the U.S. did not immediately respond to a request for comment on the Ukrainian claims.

Zelenskyy said the site did not present any danger or strategic value for the Kremlin.

“Russia continues to take out its powerlessness on ordinary citizens. It is useless to hope for adequacy and humanity on its part,” he added.

The Ukrainian president addressed leaders at the G7 summit on Monday, pleading for more military support such as “additional air defense capabilities that could shoot down missiles out of the sky,” according to national security adviser Jake Sullivan.

The U.S. is preparing to send a medium- to long-range surface-to-air missile system, Sullivan said in a briefing with reporters.

As details filtered through from Kremenchuk, Ukrainian Foreign Minister Dmytro Kuleba said that the response from the world should be “more heavy arms for Ukraine, more sanctions on Russia and more businesses leaving Russia.”

The strike took place just before 4 p.m. local time (9 a.m. ET), according to Ukraine’s State Emergency Service, which said that recovery efforts were ongoing with the help of 115 rescuers and 20 pieces of equipment. Efforts also continued to extinguish the flames, which covered more than 110,000 square feet and had filled the one-story building that houses the shopping center.

Mayor Vitalii Maletskyi said the city had turned a local hotel into a contact point for those who had not heard from friends and relatives. A hotline number was created, as well.

Though Monday’s toll remains unclear, the incident carried echoes of some of the worst alleged atrocities of the war.

In April a missile attack on the Kramatorsk train station in Ukraine’s east left 50 civilians dead, including five children, as many sought to flee the conflict. A month earlier a Russian strike on a theater in Mariupol where civilians had been sheltering is estimated to have killed hundreds.

Russian forces also appear to have shelled the northeastern region of Kharkiv on Monday, according to local Ukrainian officials, who reported that three people were killed and 15 people, including children. were injured. That number, authorities said, is also expected to rise.

The strikes come just a day after Ukrainian officials blamed Russia for hitting two residential buildings in the capital, Kyiv, killing two people and signaling that Moscow was not limiting its assault to the eastern Donbas region where the fighting has been focused in recent months.

From Tiffany to Target, stores are boarding up windows in case...