The World Anti-Doping Agency (WADA) has unanimously agreed to ban Russia from major international sporting competitions — notably the Olympics and the World Cup — for four years over doping non-compliance.

WADA’s compliance review committee (CRC) had suggested several sanctions because of the Russian Anti-Doping Agency’s (RUSADA) failure to cooperate fully during probes into Russian sport.
WADA’s executive committee decided to uphold the recommendations at a meeting in Lausanne, Switzerland on Monday.
Russian whistleblower Dr. Grigory Rodchenkov, who was influential in initially exposing the doping cover-up, praised WADA’s decision.
“Finally, Russia’s many doping and obstruction sins will now get some of the punishment they richly deserve. For far too long, Russia has weaponized doping fraud and state-sponsored criminal activity as a tool of foreign policy,” said Rodchenkov via his lawyer Jim Walden, in a statement sent to CNN.
“Let every corrupt nation that tries to play from Russia’s illicit playbook take heed of today’s monumental decision. When doping conspiracies become a crime under the Rodchenkov Anti-Doping Act, cheaters will be in U.S. prisons and clean athletes will be better protected.”
RUSADA has 21 days to accept the decision or send the matter to the Court of Arbitration for Sport (CAS).
Svetlana Zhurova, first deputy chairperson of the international committee of the Russian State Duma lower parliament house, suggested an appeal was very likely and that a decision would be made when RUSADA meets on December 19.
“I am 100% sure [Russia will go to court] because we must defend our athletes,” she told TASS News Agency.
The latest ban still leaves the door open for Russian athletes, who can prove they are not tainted by the scandal, to compete as neutral athletes.
For example, the Russian national team can still qualify for the World Cup finals in 2022, but if successful would have to compete as a neutral team in Qatar.
READ: World Anti-Doping Agency accused of being ‘played’ by Russia 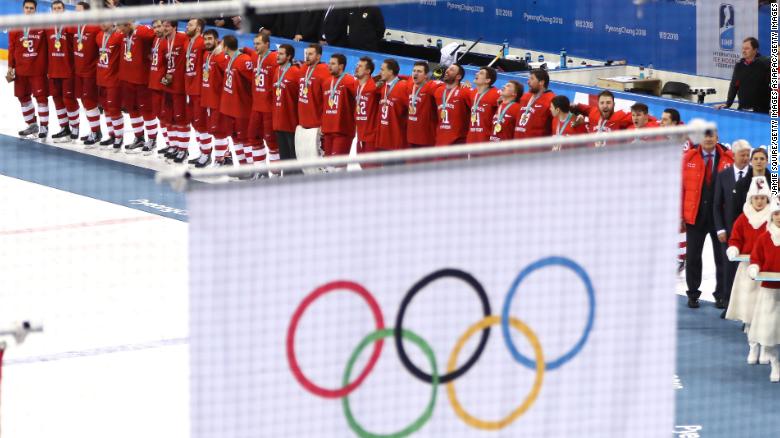 Russian athletes competing under a neutral banner look on as the Olympic flag is raised during the medal ceremony at PyeongChang 2018.

If upheld, WADA’s decision means Russia will be unable to compete in events such as next year’s Olympic and Paralympic Games in Tokyo as well as the Winter Olympics in Beijing in 2022. It will also be unable to host any major sporting events.
However, the football team will still be able to compete in next year’s European Championship because tournament organizers UEFA fall out of WADA’s remit. European football’s governing body said it had no comment WADA’s imposition of the four-year ban.
“For too long, Russian doping has detracted from clean sport,” said WADA President Sir Craig Reedie in a statement.
“The blatant breach by the Russian authorities of RUSADA’s reinstatement conditions, approved by the ExCo in September 2018, demanded a robust response. That is exactly what has been delivered today.”
WADA’s punishment relates to inconsistencies in data retrieved by WADA in January 2019 from the Moscow lab at the center of the 2016 McLaren report, which uncovered a widespread and sophisticated state-sponsored sports doping network.
RUSADA was initially deemed non-compliant after the publication of the McLaren report in 2016.
Commissioned by WADA, the report found the Russian state conspired with athletes and sporting officials to undertake a doping program that was unprecedented in its scale and ambition.
The findings led to sanctions, including no Russian team being present at the 2018 Winter Olympic Games in Pyeongchang, with certain eligible athletes being forced to compete under a neutral flag.
Reedie continued: “Russia was afforded every opportunity to get its house in order and rejoin the global anti-doping community for the good of its athletes and of the integrity of sport, but it chose instead to continue in its stance of deception and denial.”
“As a result, the WADA ExCo has responded in the strongest possible terms, while protecting the rights of Russian athletes that can prove that they were not involved and did not benefit from these fraudulent acts.”
Original Source

Official Inflation Rate In Iran At 42 Percent In Past 12...

Trump Questions Iran Claim It Had Nothing to Do with Saudi...