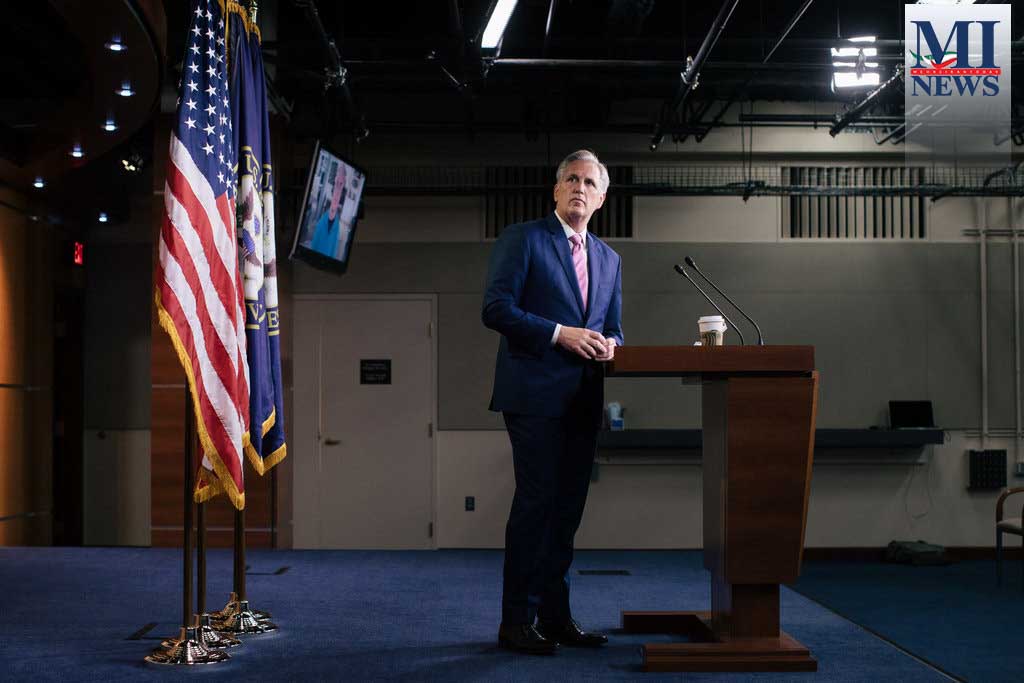 Republican leaders sued Speaker Nancy Pelosi and top congressional officials on Tuesday to block the House of Representatives from using a proxy voting system set up by Democrats to allow for remote legislating during the coronavirus pandemic, calling it unconstitutional.

In a lawsuit that also names the House clerk and sergeant-at-arms as defendants, Representative Kevin McCarthy of California, the minority leader, and roughly 20 other Republicans argued that new rules allowing lawmakers to vote from afar during the coronavirus outbreak would be the end of Congress as it was envisioned by the nation’s founders. Democrats pushed through the changes this month over unanimous Republican opposition.

The Republicans asked a federal judge in Washington to strike down the practice immediately — leaving uncertain the fate of legislation the House plans to take up this week using the new procedures — and to invalidate it permanently.

The suit will face an uphill battle in the courts, where judges have been reluctant to second-guess Congress’s ability to set its own rules. But it fits into a broader push by Republicans, led by President Trump, to put a cloud of suspicion over Democratic efforts to find alternative ways to vote during the pandemic — both in the House and in elections across the country — portraying them as fraudulent attempts to gain political advantage.

Mr. Trump has railed repeatedly in recent weeks against the idea of expanding mail-in voting, and on Tuesday said with no evidence that a plan to allow for the practice in California would lead to a “Rigged Election.”

On Sunday, the Republican Party sued Gov. Gavin Newsom and California’s secretary of state in an attempt to strike down an executive order dispatching mail-in ballots to every registered voter there, deriding it as an “illegal power grab” and part of Democrats’ “partisan election agenda.”

Mr. McCarthy echoed that language in a statement on Tuesday accompanying the filing, and called on the House to return to work physically in Washington.

On Thursday, Senator Mitch McConnell, Republican of Kentucky and the majority leader, tied the two issues together, saying the House Democrats’ proxy voting plan came from “the people who want to remake every state’s election laws.” He also suggested that his chamber might not take up any legislation passed by the House when a quorum of members was not physically present.

“There will be enormous constitutional questions around anything the House does if they fail to demonstrate a real quorum but plow ahead anyhow,” he said. Mr. McConnell has rejected a bipartisan bid to institute remote voting in his own chamber, and has brought the Senate back to work in person.

The new procedures adopted by the House allow any absent lawmaker to designate another member who is physically present to record a vote on his or her behalf, during periods when the speaker, the clerk and the sergeant-at-arms agree there is a state of emergency because of the coronavirus.

In the lawsuit filed on Tuesday, Republicans argued that voting by proxy “contravenes the founders’ design” that Congress must meet physically as a body, “subverts the structure of the United States Constitution” and dilutes the voting power of individual members of the House.

“Over the course of 231 years, Congress has assembled at the seat of government while war raged in the surrounding environs and deadly contagion spread throughout the country,” Mr. McCarthy and the Republicans wrote in the suit, citing the War of 1812, the Spanish flu and other dangerous episodes when Congress continued to meet.

“The unbroken American tradition of in-person assembly and voting in Congress confirms the unambiguous text of the Constitution: Proxy voting by members of the House of Representatives is unconstitutional,” they added.

Democratic leaders insist that the update to the House rules is a good-faith attempt to put a vital branch of government back to work safely on an emergency basis. In a statement on Tuesday before the suit was filed, Ms. Pelosi said that the House’s position was “fully consistent with the Constitution and is supported by expert legal analyses,” and that the chamber had made “its will clear.”

“House Republicans’ sad stunt shows that their only focus is to delay and obstruct urgently needed action to meet the needs of American workers and families during the coronavirus crisis,” she said.

Despite the threat, Democratic leaders were moving ahead with plans to deploy proxy voting for the first time on Wednesday. They have already collected letters from at least 50 lawmakers, all Democrats, indicating they may use proxies to cast their votes from home.

Mr. McCarthy and the other Republicans were joined in the suit by a handful of their constituents who contended that the arrangement undermined the very idea of the House, a body where a single representative speaks on behalf of the constituents who elect him or her.

Along with Ms. Pelosi, the suit named Cheryl L. Johnson, the clerk of the House, and Paul D. Irving, the sergeant-at-arms, both of whom play vital roles in carrying out the proxy voting plan.

At the center of the lawsuit is a constitutional dispute over whether words like “assemble,” “attendance” and “present” included in the Constitution require Congress to physically come together inside the Capitol to conduct business.

Republicans argue that they do, and that previous generations of lawmakers facing their own crises as great as the Civil War, the Spanish flu and the War of 1812 never considered questioning whether that was the case.

“In an instant, and over the objections of 189 members of the House from both political parties, the 231-year constitutional tradition of in-person assembly, deliberation and voting among the people’s representatives came to an end,” Republicans said in the suit.

Democrats and the constitutional scholars they consulted in drafting the changes take the opposite view, arguing that the Constitution explicitly empowers the House and the Senate to set their own rules, stating in Article I, Section 5: “Each house may determine the rules of its proceedings.”