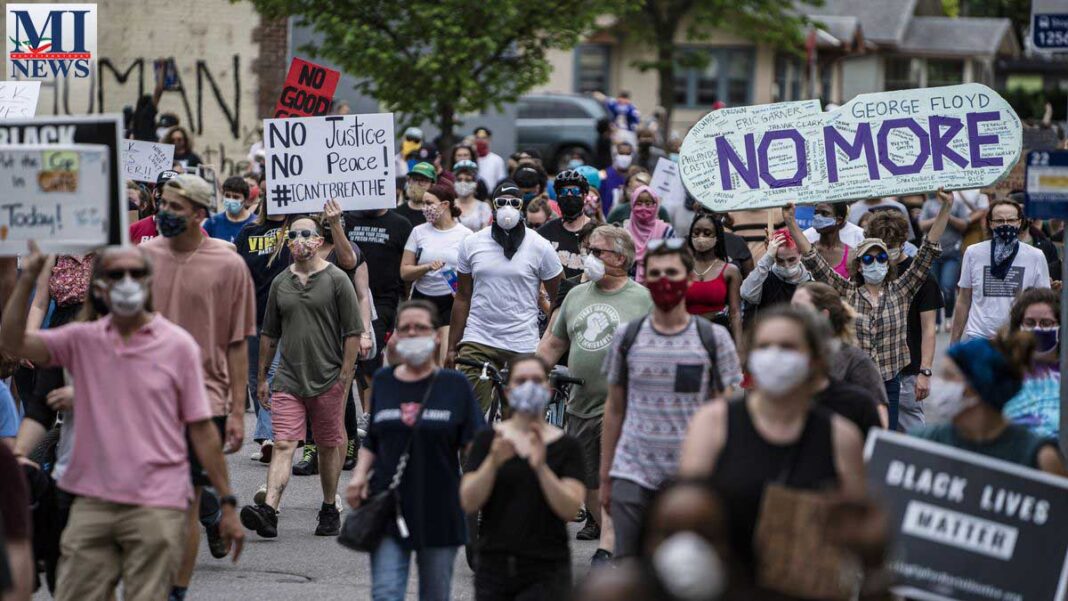 Prosecutors looking at the death of George Floyd on Thursday asked the people of Minneapolis for patience while they investigate the case that has riled the city and the nation.

Floyd, a 46-year-old black man, died after pleading for help as a police officer used his knee on Floyd’s neck to pin him — unarmed and handcuffed — to the ground. His death sparked outrage and protests across the country, demonstrations that continued Thursday.
In Minneapolis, hundreds of people gathered outside the police departments Third Precinct. Some protesters brought signs and some threw rocks. A temporary fence in front of the station was knocked over. Police responded with tear gas, rubber bullets and bean bags fired at rock throwers.
Earlier, Hennepin County Attorney Michael Freeman, giving an update to reporters on the case, said he must look at all evidence before bringing charges.
“My job in the end is to prove he violated a criminal statute. And there is other evidence that does not support a criminal charge. We need to wade through all of that evidence and come to a meaningful decision and we are doing that to the best of our ability.”
About 90 minutes later, Freeman’s office released a statement, and told CNN that Freeman misspoke about “other evidence.”
“Evidence not favorable to our case needs to be carefully examined to understand the full picture of what actually happened,” the statement reads. “This happens in every case. “
During the news conference, federal prosecutor Erica MacDonald told reporters she has hoped to brief them on a new development in the case but couldn’t at this point.
“We are going to investigate it as expeditiously, as thoroughly as justice demands,” Freeman told reporters. “That video is graphic, horrific and terrible. And no person should do that.”
Both MacDonald and Freeman said the investigation requires more time.
“I am pleading with individuals to remain calm and let us conduct this investigation,” she said. “Our highest priority is that justice will be served.”
“Sometimes that takes a little time and we ask people to be patient,” Freeman said. “We have to get this right.”
The Minneapolis Police Department this week fired the four officers involved in Floyd’s arrest. The incident is being investigated by local, state and federal authorities.
All four officers involved in the death have invoked their Fifth Amendment right against self incrimination, Freeman told CNN following the press conference.

Minneapolis’ police chief on Thursday acknowledged his department had contributed to a “deficit of hope” in the city after the — and he and other officials called for calm following a night of destructive protests.
“I am absolutely sorry for the pain, devastation and trauma Mr. Floyd’s death has left on his family, his loved ones,” Minneapolis and the world, Minneapolis Police Chief Medaria Arradondo said in a news conference.
“I know there is currently a deficit of hope in our city … and I know our department has contributed to that deficit as a whole,” Arradondo said.
In Minneapolis, protests transitioned to rioting and looting south of downtown, with people smashing their way into stores and setting businesses and other buildings ablaze.
There was more looting Thursday in St. Paul, the state capital, next door.
Gov. Tim Walz activated the Minnesota National Guard to watch over the demonstrations.
Other states saw protests too. There were gatherings in Denver and New York. At the latter protest, about 40 people were arrested and several officers were injured, a law enforcement official told CNN.
The charges range from obstruction of governmental administration to criminal possession of a weapon, the official added.
On Wednesday night, Minneapolis’ second day of protests transitioned to rioting and looting south of downtown, with people smashing their way into stores and setting businesses and other buildings ablaze.
One of Floyd’s brothers cried Thursday morning as he said his family wants protests to be peaceful, but stressed people are struggling with seeing another black man die following a police encounter, this one over the passing of an allegedly counterfeit $20 bill at a store.
“I want everybody to be peaceful right now, but people are torn and hurt, because they’re tired of seeing black men die,” George Floyd’s brother, Philonise Floyd, said on CNN’s “New Day.”
“These officers (involved in George’s arrest) need to be arrested right now … and held accountable about everything because these people want justice right now,” he said.
A man was fatally shot overnight near the protests, police said early Thursday. One person was arrested, and police said they’re investigating the nature of the incident.
Fires eventually broke out at businesses in the area, including an AutoZone. Flames lit up a building under construction, one floor eventually collapsing.
At a nearby Target, video shows people taking cartloads of goods and loading them into their cars.
People also raided a grocery store. On Thursday morning its exterior glass lay shattered and the floor was littered with groceries as a interior fire sprinkler system sprayed water.
An unspecified number of police officers and other people suffered minor injuries in the protests, Arradondo said, without elaborating.

Floyd, a 46-year-old Houston native, worked security at Conga Latin Bistro in Minneapolis for five years, according to its owner, Jovanni Thunstrom.
He moved to Minneapolis for work and to drive trucks, his friend of more than 20 years, former NBA player Stephen Jackson, said.
Jackson said Floyd, a father of two girls, was like a brother to him, and they used to refer to each other as twins.
“He was just a great dude … somebody that wanted to be a protector and provider for everybody around him,” Jackson told CNN Thursday.
“It sucks that the whole world had to see my friend go that way. … He didn’t deserve that, but the way that people are supportive of him and standing up for him … his death will not be in vain.”
No charges have been filed in Floyd’s death, but his family say they want murder charges for all four fired officers.

Who the officers are

In a news conference Wednesday, Minneapolis Mayor Jacob Frey also called for criminal charges to be brought against the officer who kept his knee on Floyd. That officer was identified by his attorney Tom Kelly as Derek Chauvin. Kelly has not released a statement on Chauvin’s behalf.
Chauvin had 18 complaints filed with the police department’s internal affairs division, according to MPD.
It’s unclear what the complaints, which were all closed, were for and no details were provided by police.
Only two of the 18 complaints against Chauvin were “closed with discipline,” according to a public summary from police. The “discipline issued” column listed a letter of reprimand for each of the two complaints.
In an interview aired Thursday, Frey told CBS News that he believed Floyd’s death constituted murder.
“I am not a prosecutor, but let me be clear: The arresting officer killed someone,” Frew told CBS. “He (Floyd) would be alive today if he were white.”
The other three officers were identified by police as Thomas Lane, Tou Thao and J Alexander Kueng.
Thomas Plunkett, representing Kueng, said, “At this time, out of respect for Mr. Floyd, we are declining all invitations to discuss these painful events.”
Earl Gray is representing another of the officers involved but has declined to say who his client is.

Police said they arrested Floyd Monday after responding to the forgery call and finding him inside a car.
Police said he “physically resisted” after he got out of the vehicle.
Surveillance video obtained from a nearby restaurant shows some of the officers’ initial contact with him and doesn’t appear to show obvious resistance from a handcuffed Floyd. Eventually Floyd is escorted away from view.
Floyd was declared dead at a nearby hospital a short time later. A medics team that responded to the incident worked on an “unresponsive, pulseless male,” according to a Minneapolis Fire Department narrative released by police.
close dialog.

Nearly 70 percent of California coronavirus cases are people under 49...