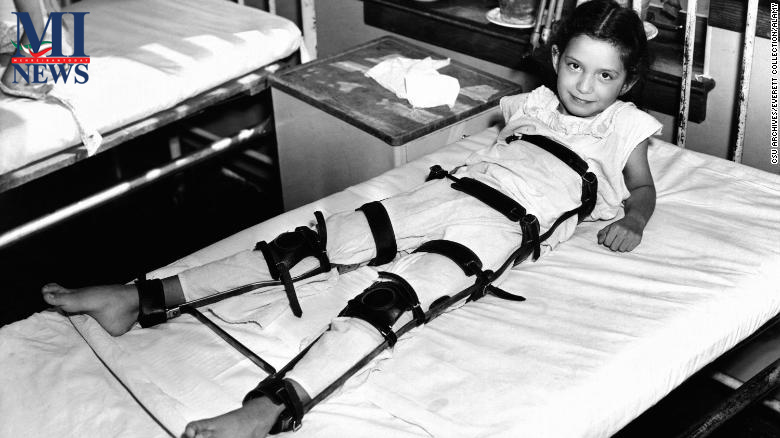 An ancient virus, polio has crippled and killed humans for centuries. Etchings on Egyptian vessels show people with withered legs on crutches.

Striking children younger than 5 the hardest, the worst form of the virus causes nerve injury that can lead to paralysis, difficulty breathing and death. During 20th century epidemics, the virus often struck in warm summer months, sweeping through towns and cities every year or so.
Polio was one of the world’s most feared diseases until Dr. Jonas Salk invented the polio vaccine and tested its safety in 1954.
“In the early 1950s, before polio vaccines were available, polio outbreaks caused more than 15,000 cases of paralysis each year” in the United States, the US Centers for Disease Control and Prevention noted. “Parents were frightened to let their children go outside, especially in the summer when the virus seemed to peak.”
By 1988, reported cases of polio worldwide reached a peak of 350,000, according to the World Health Organization. 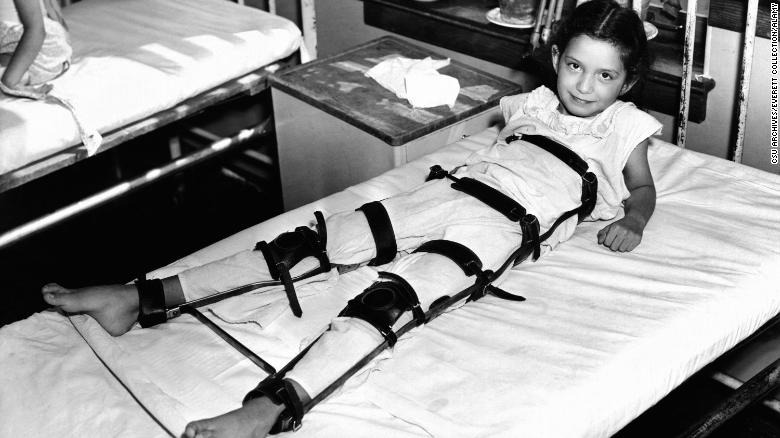 Polio hit children the hardest, at times leaving them with lifelong disabilities.

An enterovirus called the poliovirus causes polio. There are three strains, two of which have been eliminated in the world, according to the Global Polio Eradication Initiative, a WHO program.
Enter your email to subscribe to the Results Are In Newsletter with Dr. Sanjay Gupta.
One type of wild polio virus still circulates in Pakistan and Afghanistan, however, and can be picked up by travelers and carried worldwide. “It takes only one traveler with polio to bring the disease into the United States,” the CDC said.
Transmission can also occur when not enough children are vaccinated in an area. That typically occurs with the oral polio vaccine, created by Dr. Albert Sabin and first used in 1961. This vaccine’s formulation has a mixture of each of the three types of live attenuated poliovirus strains, according to GPEI.
“The weakened strains are shed by vaccinated children into the environment via their digestive systems and can pass from one unvaccinated individual to another, a process exacerbated by poor sanitation systems and the absence of clean drinking water,” the GPEI said.
Once the strain has infected an unvaccinated person, it begins to circulate and can be carried via travel around the world.
That may be a factor in the recent diagnosis of polio in a Rockland County, New York, man, the first case of polio in the United States since 2013, according to the New York State Department of Health.
Tests confirmed by the CDC found a type of virus that would have come from someone who had received “the oral polio vaccine (OPV), which is no longer authorized or administered in the U.S.,” the health department said in a statement.
“This suggests that the virus may have originated in a location outside of the U.S. where OPV is administered, since (reverted) strains cannot emerge from inactivated vaccines,” the statement said.
Health professionals around the world commonly use different types of oral vaccines to fight polio, because they are inexpensive, easy to administer, safe, effective and offer long-lasting protection. However, Salk’s original, inactivated polio vaccine, administered via a series of shots in childhood, has been the only version in use in the US since 2000, the CDC said. 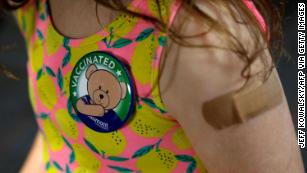 Childhood vaccination rates fell in kindergartners last school year, CDC data shows
The polio virus lives in an infected person’s throat and intestines. People carrying the poliovirus, including those without symptoms, can spread the highly contagious virus for weeks in their feces. In rare cases, viral transmission can occur via droplets from a sneeze or cough, the CDC said.
Most people come into contact with polio by picking up a tiny piece of infected poop and then touching the mouth. Exposure to the virus also occurs when children mouth toys or other objects contaminated with feces.
In unsanitary conditions, the virus can also spread via contaminated food and water.

Like Covid-19, many cases of polio are asymptomatic. In fact, people have no symptoms in about 95% of all polio cases, the CDC said.
When symptoms appear, they can take three forms. Flu-like symptoms such as headache, sore throat, nausea, diarrhea, fever and fatigue are characteristics of abortive polio.
If those symptoms include additional neurological symptoms, such as light sensitivity or a stiff neck, the person may have nonparalytic polio.
The most dangerous version of polio can cause paralysis within “a matter of hours,” the WHO said. The illness begins with flu-like symptoms, then transitions into muscle pain or spasms, and loss of reflexes. Paralysis of one side or the other can follow. 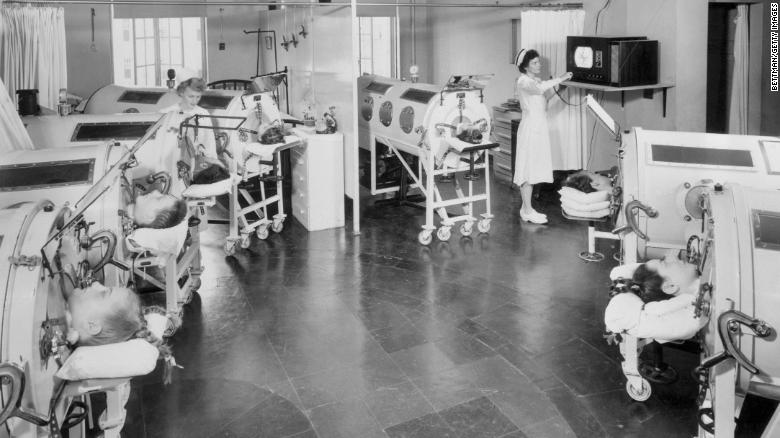 Iron lung patients at a Baltimore hospital get TVs for the first time. Mirrors allow them to watch broadcasts.
The disease can also affect lungs — between 5% and 10% of people die when their breathing muscles become immobilized, according to the WHO. During the epidemics of the 1940s and ’50s, patients were often put into an iron lung to help them breathe.
However, statistics have shown that in most cases of paralytic polio, the person recovers — fewer than 1% of people who contract polio become paralyzed, according to GPEI. Unfortunately, muscle or joint weakness and pain, breathing and swallowing problems, sleep issues and cold intolerance can remain for life in some cases. The virus can even hide, lying dormant, and then appear years later in what is called post-polio syndrome, the CDC said.

“Heat and physical therapy (are) used to stimulate the muscles and antispasmodic drugs are given to relax the muscles,” the GPEI said. “While this can improve mobility, it cannot reverse permanent polio paralysis.”

Vaccination is the only prevention.

Vegetarian Diets not Always the Most Climate-friendly, Researchers Say By Reuters...