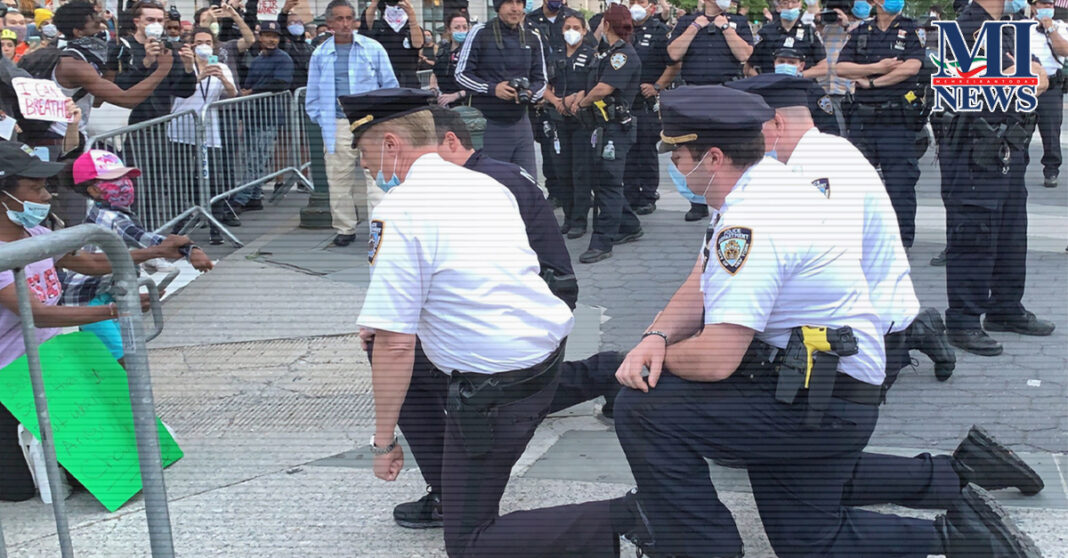 The lieutenant told his colleagues he had trouble sleeping after he “made a horrible decision to give into a crowd of protesters demands and kneeled alongside several other officers.”

A lieutenant with the New York Police Department who knelt alongside George Floyd protesters apologized for doing so in an email to his colleagues, writing, “The cop in me wants to kick my own a–.”

In a June 3 email obtained by NBC New York, the officer, Lt. Robert Cattani, said his kneeling with protesters “goes against every principle and value that I stand for.”

Cattani was among at least four officers who submitted to demonstrators’ chants of “NYPD take a knee” during a May 31 protest in Lower Manhattan, according to the New York Post, which first reported the email.

The police lieutenant told his colleagues in the email that he had trouble sleeping after he “made a horrible decision to give into a crowd of protesters demands and kneeled alongside several other officers.”

The symbolic pose gained prominence in 2016 after Colin Kaepernick, then quarterback for the San Francisco 49ers, began kneeling during the national anthem before games to protest racial inequality and police brutality against people of color.

In his email, Cattani said he knelt to appease protesters.

“The conditions prior to the decision to take a knee were very difficult as we were put center stage with the entire crowd chanting,” he wrote.

“I know I made the wrong decision,” he added. “We didn’t know how the protesters would have reacted if we didn’t and were attempting to reduce any extra violence.”

He said he thought that by kneeling, maybe “one protester/rioter who saw it would later think twice about fighting or hurting a cop.”

Cattani said he spent the first part of his career working to build a reputation as a good cop and that he “threw that all in the garbage” on May 31.

“I know that it was wrong and something I will be shamed and humiliated about for the rest of my life,” he wrote.

Protesters across the country and around the world have called for greater police accountability since George Floyd, a 46-year-old African American man, died after a white Minneapolis police officer knelt on his neck for more than eight minutes on May 25.

The officer, Derek Chauvin, has been fired and charged with second-degree murder, third-degree murder and manslaughter. Three other officers involved in the arrest were also fired and face charges of aiding and abetting murder.

Cattani was not the only officer in New York City to take a knee with protesters. The city’s top uniformed officer, Chief of Department Terence Monahan, joined hands with and knelt alongside protesters in Washington Square Park on June 1. He drew praise from Mayor Bill de Blasio, who tweeted later that day: “We’re lucky to have people like Chief Monahan wearing the uniform. He believes in Neighborhood Policing with all his heart.”

But some others, such as the city’s public advocate, Jumaane Williams, have been critical of the gesture by people who have not been active in the racial justice movement.

In reference to recently introduced police reforms in New York, Williams said on “AM Joy” on MSNBC this week: “It should not have taken 8 or 9 days of unrest” on these issues we have been speaking about for such a long time. “All of the people who now find it easy to take a knee because of the unrest, many years ago were excoriating people like Colin Kaepernick.”

Writer Roxane Gay tweeted on June 5: “I need cops and politicians and white people more broadly to stop kneeling. We don’t need you to kneel. We need you to stand up for real, radical, sustained change.”

NYPD Commissioner Dermot Shea meanwhile, in speaking directly to officers on Thursday, said they need to listen to public sentiment and understand why people are protesting, NBC New York reported.

“I’ve heard police officials this week talking about how could people feel this way,” Shea said. “The quicker we realize that, the quicker we get to a solution.”

Two NYPD officers have been suspended without pay for conduct during the George Floyd protests. One of them, Vincent D’Andraia, was seen in a video shoving a woman to the ground on May 29 at a demonstration in Brooklyn. He was charged Tuesday with misdemeanor assault, criminal mischief, harassment and menacing.

New Mexico governor condemns vigilantes who might have instigated violence at...