Home News North Korea warns US to prepare for ‘Christmas gift,’ but no one’s...

North Korea will send a “Christmas gift” to the United States, but what that present contains will depend on the outcome of ongoing talks between Washington and Pyongyang, a top official has warned.

The ominous comments, which some have interpreted as a sign that North Korea could resume long-distance missile tests, comes as the clock ticks closer to the country’s self-imposed end-of-year deadline for nuclear negotiations with the Trump administration.
Talks between the two sides have appeared to be in a rut in recent months, with North Korea conducting several shorter–range missile tests.
In a statement translated on the state news agency, Ri Thae Song, a first vice minister at the North Korean Foreign Ministry working on US affairs, accused US policy makers of leveraging talks with Kim Jong Un for domestic political gain.
“The dialogue touted by the US is, in essence, nothing but a foolish trick hatched to keep the DPRK bound to dialogue and use it in favor of the political situation and election in the US,” Ri said, using the acronym for North Korea’s official name, the Democratic People’s Republic of Korea.
“It is entirely up to the US what Christmas gift it will select to get,” added Ri.
In 2017, North Korea referred to its first test launch of an intercontinental ballistic missile (ICBM) as a “gift” for the US on the Fourth of July holiday. That launch sparked what became a tense, months-long standoff between the two sides.
What happens in the coming weeks will likely determine if Washington’s next so-called “Christmas gift” turns out to be similarly volatile.
“It’s hard to predict because it could go either way,” said Duyeon Kim, senior adviser on Northeast Asia and nuclear policy to the International Crisis Group. “It really depends on the circumstance and the situation, which will better inform how North Korea reacts.

On Wednesday, North Korea’s state-run Korean Central News Agency announced that the country’s most powerful political body, the Central Committee of the Workers’ Party of Korea, will meet at the end of December “in order to discuss and decide on crucial issues in line with the needs of the development of the Korean revolution and the changed situation at home and abroad.”
Whatever North Korean leader Kim Jong Un plans to do with respect to nuclear negotiations will likely be finalized at that meeting, according to Duyeon Kim.
“The outcome of this meeting and Pyongyang’s policy line will depend on how happy they are with Washington and will be revealed in (Kim Jong Un’s) New Year’s Day address,” said Duyeon Kim.
Washington, for its part, has not voiced increased alarm over the status of talks with North Korea.
Speaking in London on the sidelines of a NATO summit Tuesday, US President Donald Trump said “we’ll see what happens” when it comes to North Korea.
“My relationship with Kim Jong Un is really good, but that doesn’t mean he won’t abide by the agreement we signed,” Trump said. “I hope he lives up to the agreement, but we’re going to find out,” added Trump.
“(Kim Jong Un) definitely likes sending rockets up, doesn’t he? That’s why I call him “Rocket Man.” 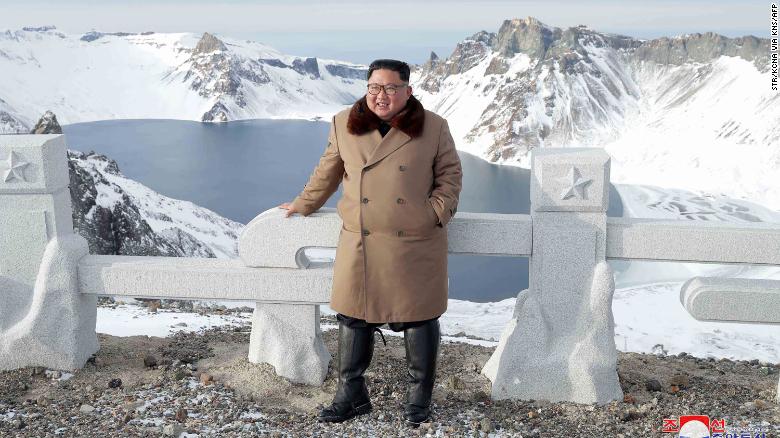 Kim’s back on a horse

North Korea’s decision to hold the meeting was announced the same day as KCNA released dozens of photographs showing Kim Jong Un on horseback touring Mount Paektu, an active volcano that sits on the country’s border with China, alongside his wife and other officials. This was Kim’s second trip on horseback atop the mountain since October.
While the photographs are the butt of jokes and mockery online, the images of Kim on horseback touring the mountain are imbued with potent symbolism.
According to legend, Mount Paektu is the birthplace of Dangun, the mythical founder of the first Korean kingdom some 4,000 years ago. 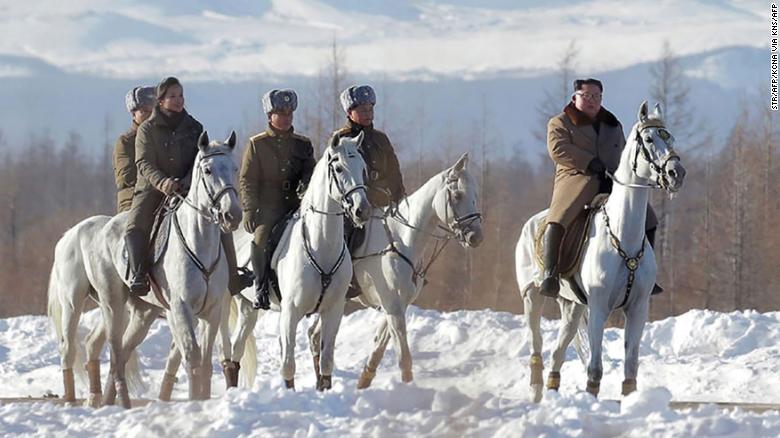 Kim Jong Un is seen riding a horse as he visits Mount Paektu in this KCNA photo.
Kim Il Sung, Kim Jong Un’s grandfather and North Korea’s founding father, is also believed to have led a cavalry unit against the Japanese occupation from a base on the mountain.
Putting Kim on a horse at Mount Paektu, wearing a similar coat to the one his grandfather was often seen wearing publicly, is likely meant to remind North Koreans of the Kim family’s legacy of fighting imperialism, according to Michael Madden, an expert in North Korean leadership at the Stimson Foundation.
“Kim Jong Un is taking on the anti-imperialist credentials of his grandfather,” added Madden.
However, it’s unclear why Kim held the photo shoot at the mountain. Kim may have stopped there after a recently reported visit to the nearby township of Samjiyon, rather than making a dedicated visit.

A 16-year-old girl was kidnapped while walking with her mother in...