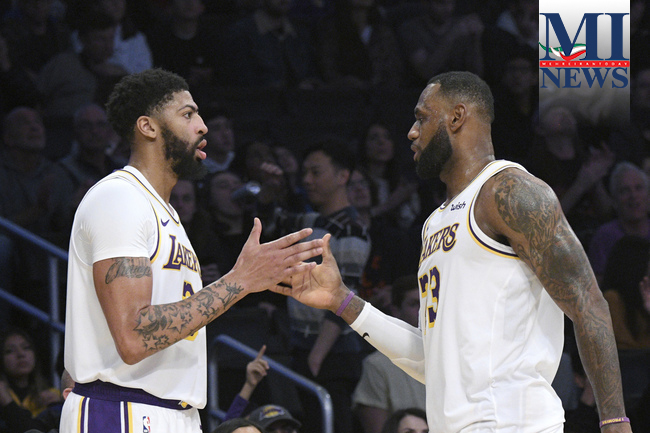 Not really. The Lakers can pay Davis a lot more money with a new contract than he could get today in an extension. Naturally, the team had to at least make the overture to its All-Star forward, just in case he was interested in locking in long-term, lesser money ahead of schedule.

He was not, as Chris Haynes of Yahoo Sports reported on Tuesday. The Lakers offered a four-year, $146 million extension that Davis was “bypassing … in favor of entering unrestricted free agency in July.”

The issue at hand: The most the Lakers can offer in an extension is a 20 percent bump above his current salary of $27.1 million, which would be a deal starting at $32.5 million. While that’s a raise over the $28.8 million player option he’s expected to decline, he should be able to sign at $34.8 million (30 percent of a projected $116 million salary cap) by waiting for free agency.

He’s also eligible to sign for five years instead of four with a new contract, and the resulting $201.8 million would be significantly more than what he reportedly rejected.

That’s actually a point of contention for several NBA executives who don’t understand why the rules limit teams from giving a maximum extension to a willing player.

“It’s why Gordon Hayward left the [Utah] Jazz for [the] Boston [Celtics in 2017],” a former executive said. “The Jazz wanted to extend him before he hit free agency. He probably would have taken it, but they couldn’t pay market value. Once a player is on the market, anything can happen. It’s one of the worst rules in the [collective bargaining agreement].”

The Lakers and Davis are still bound to the CBA, but few in NBA circles think there’s much chance Davis leaves Los Angeles this summer.

“After hiring Rich Paul [of Klutch Sports], teaming up with LeBron [James] and forcing his way to the Lakers, he’s not going to go anywhere else [in July],” the executive continued.

If anything, some within the Lakers organization are more concerned about the length of Davis’ next contract.

The 26-year-old will finish the 2019-20 season with eight years of service. Two more and he’ll be eligible for the highest salary tier (35 percent of the cap). He could choose to sign a three-year, $112.8 million contract with a player option for the final season, allowing him to hit free agency once again in 2022.

That’s Davis’ best path if he wants to maximize his income. His next deal would potentially be in the $266 million range over five seasons for a seven-year total of roughly $339 million.

The challenge for the Lakers is making sure they have the talent to support him given that James just turned 35 years old and may not be the same player as he nears his 40s.

James is under contract for two more seasons, although he can opt out before July 2021 and would then be eligible to sign at roughly $142 million for three years. Or he could just finish his deal and hit free agency with Davis in 2022, assuming Davis follows the path laid out above.

“Will James live up to a contract like that, at that age?” the former executive asked.

And what of Giannis Antetokounmpo, who will be the next superstar to hit unrestricted free agency in July 2021? He’s also unlikely to take an extension with the Milwaukee Bucks due to the same restriction the Lakers face today. Theoretically, Los Angeles could have $81 million invested in James and Davis that summer with a projected salary cap of $125 million. Even if it cleared the books completely with just those two under contract, the team wouldn’t have much more than $28 million to spend on Antetokounmpo with 10 empty roster charges eating up over $10 million in cap space.

That’s not enough. He could earn a projected $37.5 million in the first year of a new deal.

At this point, there’s no reason to expect Antetokounmpo will leave Milwaukee. Time may change that, but there’s still no guarantee he would pick the Lakers if he does. Perhaps James would be willing to take a lower salary to make room for the NBA’s reigning MVP, but the Lakers won’t be able to max out all three.

Nonetheless, common sense (along with the presence of younger brother Kostas Antetokounmpo on a two-way contract) suggests the Lakers have a close eye on Giannis’ future.

In the meantime, Los Angeles must attend to more pressing matters over the coming months, notably making sure it’s able to lock in Davis, whether for two or up to five years.

By July, Davis will know if the Lakers have a championship team. But even if the franchise falls short of a title, expect him to re-sign. The recent extension snub was inevitable.