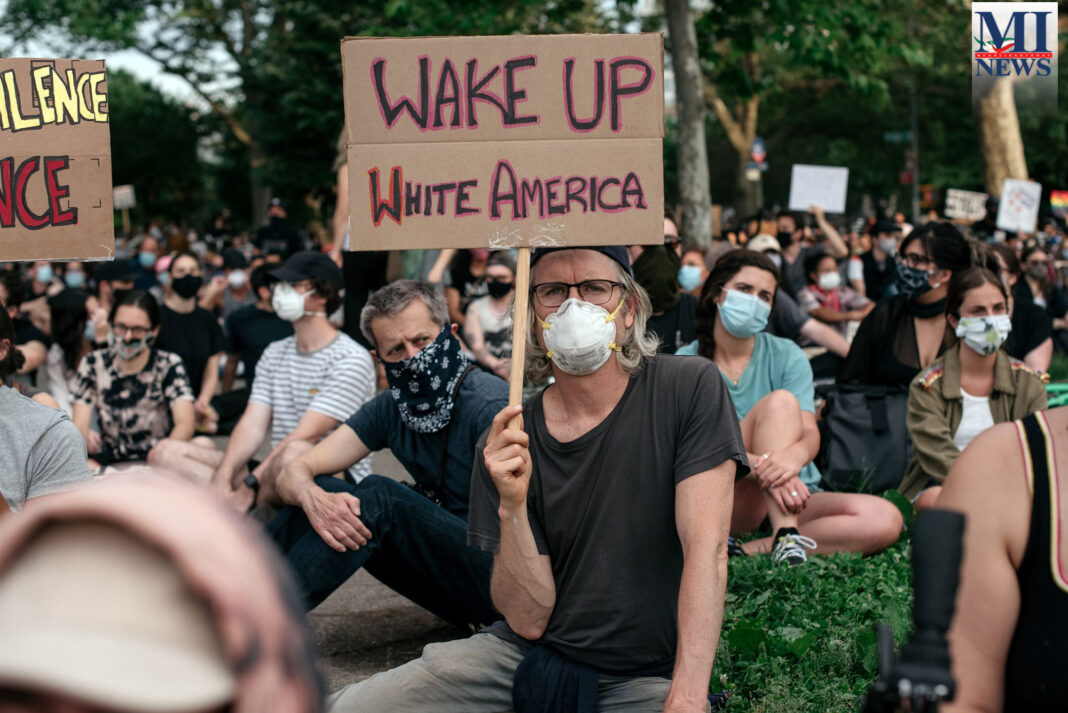 At the start of a silent vigil outside the New York City mayor’s mansion Wednesday night, one of the organizers called out a few ground rules to the thousands who had gathered. One of the most important, he said, “Keep masks on.”

Few have forgotten the past few months: New York City, ground zero in the United States for the coronavirus pandemic that killed more than 20,000 of its residents, shut down as residents stayed inside as much as possible.

Perhaps as a result, it was difficult to find a protester without a mask Wednesday.

Throughout the week, organizers have pushed for everyone present at demonstrations to wear face coverings and volunteers have handed out small bundles of masks, gloves, hand sanitizer and water. The biggest challenge, however, is that social distancing is nearly impossible when thousands are packed shoulder-to-shoulder on city streets to decry racism and police brutality.

“We have reached a crux where we must choose between potentially losing our lives at the hands of the police or the pandemic,” said Chelsea Miller, a leading organizer in the city who heads up Freedom March NYC. “In many ways we’re choosing between the lives of our unborn sons and those of our parents.”

Many protesters in New York City say they feel adding their voices to the outrage over the death of George Floyd while in police custody in Minneapolis far outweighs the risk of contracting the coronavirus. Some people whose roommates have gone to live with parents because of the spread of the virus feel more comfortable going out because they don’t risk infecting those they live with.

But that’s not the case for all.

Samantha Isom, 49, a black photographer, said that she knew that one of her six roommates was worried about her coming to the vigil Wednesday. But after largely avoiding the protests, Isom said she felt her presence was necessary — especially once she reflected on the death of her uncle who was shot and killed by a police officer in the 1970s.

“I was crying about it earlier, but the thing is, it’s not just my uncle,” she said. “Ask any black person here. They have a story, a family member that was affected by police. There’s a reason this is happening.”

It’s also notable that the pandemic and the police violence have an outsize effect on communities of color.

New York City began sharing data in April that showed black and Hispanic people made up the majority of the COVID-19 deaths in the city. That trend continued through May and into June. It has not been lost on demonstrators that those most affected by the pandemic have largely been minorities, as well.

“COVID-19 is a very real thing that is disproportionately impacting black and brown bodies,” Miller said. “We’re not blind to the lack of leadership on that either.”

Some protesters have said they are now fighting two deadly pandemics: COVID-19 and racism.

Medical workers have said the same, and some joined those in the streets this week while carrying signs that read, for example, “Nurses fought COVID, now we’ll fight the police.” Demonstrations for health care workers at hospitals throughout the city were planned for Thursday.

Some doctors and nurses have also stood at the doors of their city medical centers this week and applauded the marchers, who often cheered them right back.

But the two-fold challenge is also evident now in how the police have still not amended their tactics to deal with the marches and the virus, protest organizers said. Many have pointed to instances in which officers have pulled people’s masks down, removed the face coverings when making arrests and refused to provide masks at precincts or jail cells. In one case, police trapped tightly-packed marchers on the Manhattan Bridge for hours.

It’s those situations and the dense crowds that still have some wary about participating.

David Levine, 21, came back from school at Syracuse University to live with his mom in Manhattan. He said he has had family who already caught COVID-19 and were in intense pain because of it. While Levine has come out to a few protests, he is worried that he could bring the disease home.

“For me it’s 50/50 right now, between the importance of the moment and the risk of coronavirus,” he said. “My mom has a pre-existing condition, so I’m trying to be really careful about what crowds I walk in. Most people are wearing masks, but it’s kind of amazing how people maybe forgot about COVID.”

Some people who aren’t comfortable being in the crowd also bring supplies to support the edges of protests and vigils. Maya Lansky, 22, and her boyfriend drive around in a Volkswagen station wagon that they’ve stuffed to the gills with personal protective equipment, or PPE, hand sanitizer, snacks and water.

Lansky said that, as a black woman, the Black Lives Matter movement is incredibly important to her, but she said she wasn’t comfortable walking in the crowd with others.

Thousands did Wednesday and thousands more were on the streets again Thursday during a series of memorial services for Floyd.

Wednesday’s vigil was the first protest that Susan Eastwood, 45, joined this week, but she said she felt compelled to do so after thinking of her two young sons. As she reflected on that at the beginning of the vigil, tears formed in her eyes.

“This moment is too important,” she said, as she began to cry. “How can we not show up?”

2 people have been killed in an explosion at a Houston...

Iran Sends Journalist to Notorious Prison, Jails Another for 2 Years