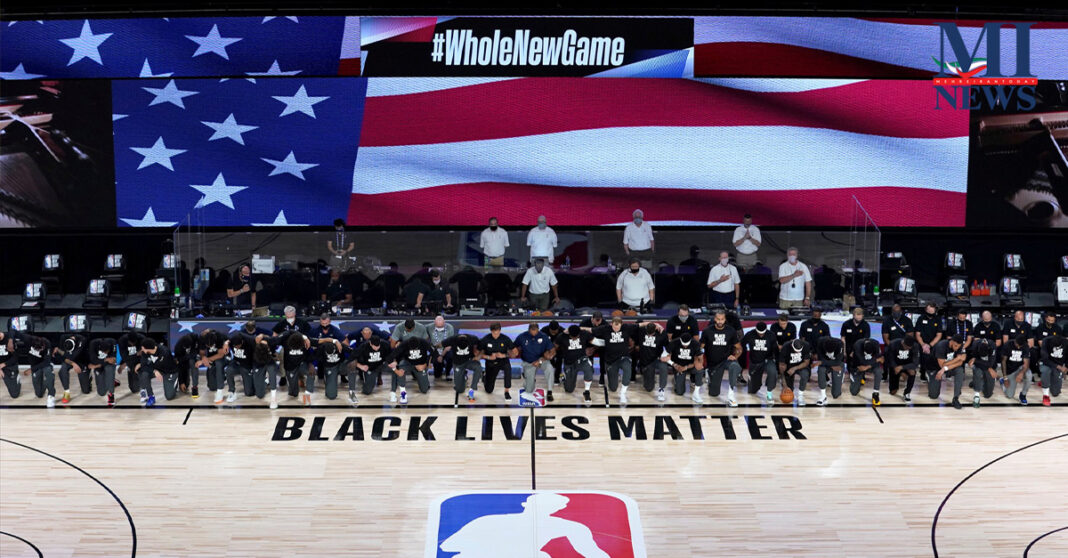 NBA teams bowed their heads and knelt during the playing of the U.S. national anthem while wearing Black Lives Matter T-shirts on Thursday as the league returned for the first time since the coronavirus halted play in March with two thrilling games.

Coaches and game officials joined players from the Utah Jazz, New Orleans Pelicans and Los Angeles Lakers and Clippers in taking a knee to protest against racial injustice and police brutality in the first games in 140 days.

Black Lives Matter was also written on the courts at the ESPN Wide World of Sports Complex in the Walt Disney World Resort near Orlando, where the NBA plans to finish its season with 22 teams inside a bio-secure bubble.

“The game of basketball has always been bigger than just the ball, the rim, 10 guys on the floor and referees,” the Lakers LeBron James said after hitting the game-winning shot in his team’s 103-101 win over the Clippers.

“It’s an opportunity to use this platform to spread a lot of positivity and love throughout the whole world.”

He said that while there has been progress in the fight against systemic racism, the key was to maintain the momentum.

“We want to keep our foot on the gas,” he said. “We’re dealing with a lot of racism, a lot of social injustice and a lot of police brutality, not only in my neighborhood and not only with Black people, but with all people of color.”

Some players had messages like “Equality,” “Education Reform” and “Say Their Names” on the backs of their jerseys in place of their names.

Athletes from around the world have united behind anti-racism protests sparked by the death of George Floyd, a Black man in police custody in Minneapolis in May.

In the first game, the Jazz came from behind to defeat the Pelicans 106-104 after the Pelicans’ Brandon Ingram’s three-pointer at the buzzer rimmed out.

The games are being played without fans, but “virtual fans” appeared on LED screens wrapped around the court and a simulation of a crowd’s cheers and jeers could be heard.

October 19, 2020
The U.S. Supreme Court on Monday agreed to decide the legality of one of President Donald Trump's hardline immigration policies that has forced tens...

October 19, 2020
U.S. lawmakers are running out of time to pass a second massive round of aid addressing the economic and health crises caused by the...
0FansLike
0FollowersFollow