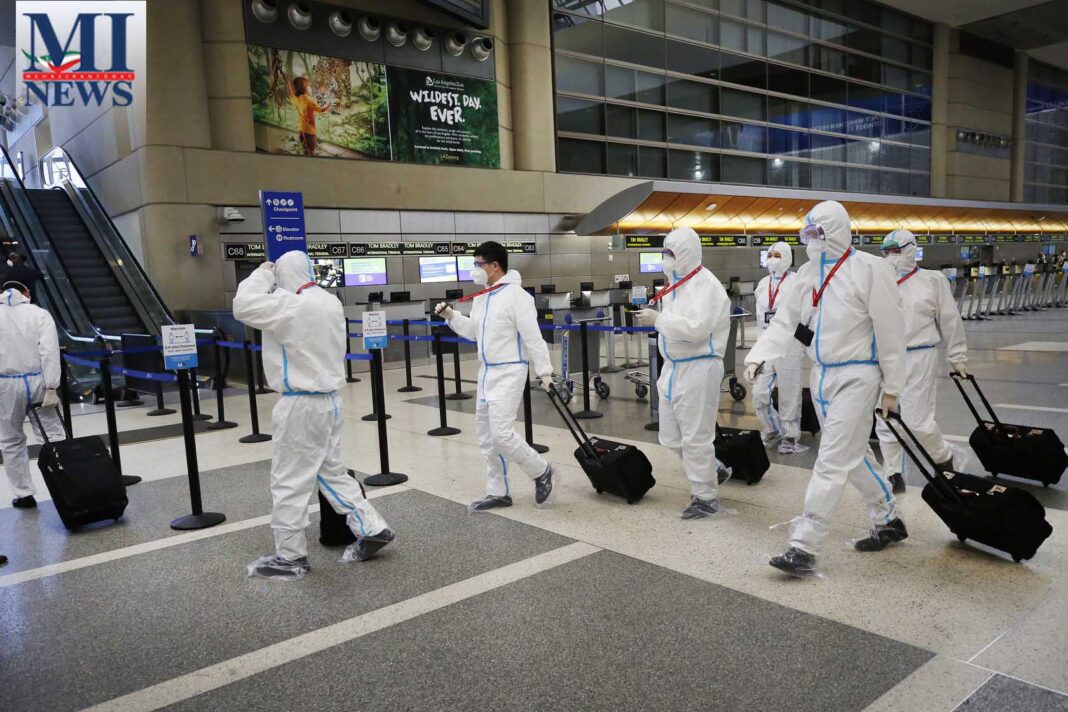 Los Angeles County’s stay-at-home orders will “with all certainty” be extended for the next three months, county Public Health Director Barbara Ferrer acknowledged during a Board of Supervisors meeting Tuesday.

Ferrer later added that even if the orders remain in place through the summer, restrictions will be “gradually relaxed” under a five-step plan.

“We are being guided by science and data that will safely move us forward along the road to recovery in a measured way—one that allows us to ensure that effective distancing and infection control measures are in place,” Ferrer said, adding that the county is counting on the public’s compliance with the orders to be able to relax restrictions.

Testifying before the Board of Superviros, Ferrer stressed further progress will be guided by efforts to contain the virus. Los Angeles County is now the Calfornia epicenter of the coronavirus, with more than 1,300 deaths so far.

“Our hope is that by using the data, we’d be able to slowly lift restrictions over the next three months,” she said. But without widely available testing for the coronavirus or rapid home kits that would allow people to test themselves daily, it seems unlikely that the social distancing directives and stay-at-home orders would be completely eased.

“I am eager to reopen more of L.A. County as soon as it’s safe to do so, in collaboration with our health experts, community leaders, businesses and residents, with best practices in place to ensure our overall health and well-being. These decisions will be guided by the latest science and data collected,” she said in a statement.”I’m confident that the more our communities continue to comply, the sooner we can resume normalcy.”

“We’re not moving past COVID-19, we’re learning to live with it — and we will keep taking measured steps toward a new, safer reality in the days and weeks ahead,” he said in a statement.

Ferrer’s comments came shortly before Gov. Gavin Newsom announced that he was modifying the state’s stay-at-home orders to allow individual counties to approve the reopening of malls for curbside pickup service only. The order also allows for the reopening of some offices if teleworking is not feasible.

“We aren’t out of the woods yet,” Newsom reminded residents.

In L.A. County, confirmed cases and deaths have continued to rise.

When beaches reopen this week, how people can use the sand will look different. Face coverings will be required when not in the water, and sunbathing won’t be allowed. Only active recreation — surfing, running, walking and swimming — will be permitted. Coolers, chairs, umbrellas and any of the other accessories that typically dot the shoreline should be left at home.

The update to L.A.’s stay-at-home orders comes as officials try to meet two needs: restarting the economy under a new normal while also ensuring that the resurgence in activity doesn’t upend progress in the fight against the coronavirus.

There has been a big push in recent weeks to reopen the state’s economy, which has been hurt by the stay-at-home orders. Newsom last week announced new protocols for retail stores and some workplaces to reopen.

Under the plan, some in-restaurant dining, car washes and shopping malls could also be allowed to reopen in coming weeks if public health officials in a county are able to demonstrate that the spread of the virus has stabilized and that they have adequate testing and hospital capacity.

Some rural counties that have seen relatively few cases are likely to be able to meet those benchmarks more quickly than urban counties such as Los Angeles.

A Times data analysis last week found most big California counties are not close to meeting Newsom’s standards. The analysis looked at which counties could pass just the first two criteria — whether deaths have stopped in the last 14 days, and whether there is no more than one case per 10,000 residents in that same time period.

Most of California failed that test. In fact, 95% of Californians live in counties that don’t meet that standard, the Times analysis found. Not a single county in Southern California nor the San Francisco Bay Area met the criteria.

Newsom suggested Friday that the guidelines would be later modified on a statewide basis, allowing larger counties hit hardest by the outbreak to also reopen more broadly. “Over the next few weeks, we’ll be making subsequent announcements for the entire state, not just those that meet those more restrictive criteria,” he said.

On Tuesday, he also explained the guidelines for restaurants in some counties to open for dine-in service, including disposable menus and an emphasis on outdoor seating. He also suggested that customers be screened for symptoms.

Also on Tuesday, Dr. Anthony Fauci, the nation’s top infectious disease expert, warned members of the U.S. Senate that states that push too quickly to ease orders could undo progress that would trigger an outbreak. Fauci said a 14-day decline in cases is the major benchmark that states should meet before reopening.

As other California regions have seen a decline in the number of reported infections and COVID-19-related deaths, L.A. County, the state’s most populous, continues to see growth on both fronts. The county reported Tuesday an additional 961 people who tested positive for the virus, and an additional 45 deaths, bringing the death toll to 1,613. L.A. County’s COVID-19 deaths account for more than half of the state’s total.

Officials have noted that the numbers reported at the start of the week are typically lower, largely because testing is not at full capacity on weekends.

Nearly 253,000 individuals of L.A. County’s 10 million residents have been checked for the virus and roughly 11% — more than 32,000 — have been infected. Officials have been encouraging all residents, even those without symptoms, to get tested.

Officials have said that social distancing has helped slow the spread of the virus, but also have warned that it remains contagious.

In Orange County, 45 more cases and one death were reported Tuesday as the number of hospitalizations — a count that fluctuates by the day depending on how many of the county’s eligible 25 hospitals report statistics — rose to 230.

Meanwhile in Santa Clara County, which was once the hottest spot for infections in the state, the number of cases has declined. Officials reported two additional cases Monday and zero deaths. Santa Clara is one of six Bay Area counties that have extended shelter-in-place orders.

Also Tuesday, the L.A. County Board of Supervisors debated whether to extend the county’s eviction moratorium to help renters who may be struggling financially because of the pandemic. Supervisors Sheila Kuehl and Hilda Solis proposed extending it until Aug. 31.

Kuehl said she based her proposed date off the Department of Public Health’s guidance that at least some of the stay-at-home restrictions would be extended for the next three months. She added that the board’s need to vote on the moratorium every month would create “amazing anxiety” for renters.

Supervisors Kathryn Barger and Janice Hahn submitted an amendment to extend the rent eviction moratorium until only the end of June. The board passed that amendment, 3-2, with Kuehl and Supervisor Mark Ridley-Thomas voting against it.

5 Coronavirus Cases Confirmed in US