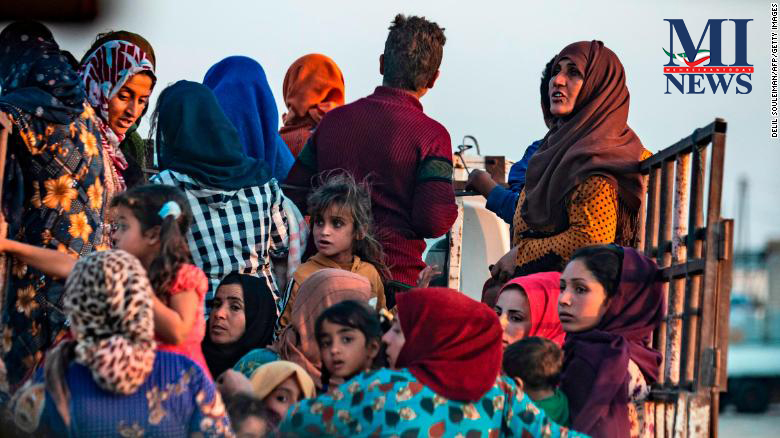 As the first bombs fell on Ras al-Ain, residents of the Kurdish-Syrian village frantically collected treasured possessions and fled their homes. Soon, a 10km long traffic jam snaked south, away from the border with Turkey.

Amid the chaos, a woman pushed her paralyzed son in a wheelchair, trying to escape the bombardment.
“It was a sight that affected me greatly,” a middle-aged lawyer and resident from Ras al-Ain, who declined to be named, told CNN. “We know the woman, and we knew she was mentally unwell.”
The lawyer said he had been busy trying to cram his children into a car leaving the village at the time. In the middle of their frenzied escape, no one from the village was able to help the help the woman, he said.
He left the village three days later, joining more than 160,000 people who have been displaced by the Turkish incursion launched last week, according to the United Nations, but the fate of the woman and her son is unclear.
“There are still some elderly people who I know back at the village,” the lawyer said. “Many of them are unable to leave the house. For the others, they feel that death is one and the same, no matter what the cause might be.” 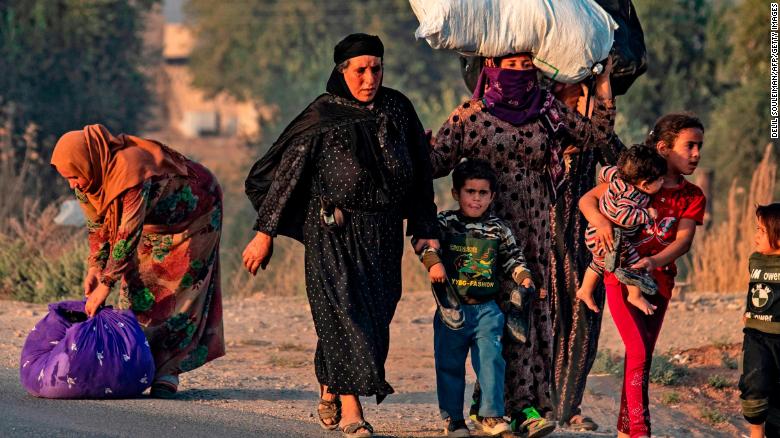 Civilians flee amid Turkish bombardment on Syria’s northeastern town of Ras al-Ain in the Hasakeh province along the Turkish border on October 9, 2019.
For years, northern Syria has been a place of refuge for people fleeing battle-stricken parts of the country. Before the Turkish operation began, the area was home to some 650,000 people who had already been displaced at least once, according to Save the Children. Many are finding themselves displaced again as the area becomes the latest frontline in the country’s eight-year war.
In a desperate attempt to escape Turkish shelling, airstrikes and a ground offensive led by Turkey’s military and Turkey-allied Syrian Arab rebels, the displaced have fled to some of the southern-most points of the Kurdish-controlled zone. Turkey is trying to drive out Kurdish fighters from the country’s frontier with Syria, and many of those displaced come from villages near the border.
The Syrian Democratic Forces (SDF) operating in the area are led by the Kurdish People’s Protection Units (YPG), which Turkey considers a terrorist organization affiliated with the separatist Kurdistan Workers’ Party (PKK). The SDF, however, are also US allies, and were instrumental in the fight against ISIS.
“Every day, more and more displaced people come to us,” said Qadriya Mohammed, who heads relief operations at GAV4RD, in the governorate of al-Hasakah. “We try every day to open new reception centers.”
The Kurdish-controlled zone, known formally as the Autonomous Administration of North and East Syria (NES), is encircled by the borders of Turkey and Iraq, as well as Syrian regime-controlled territory. With border crossings mostly closed to refugees, and many reluctant to enter regime areas, the displaced have few safe options.
Inside the larger towns, Kurdish control remains intact. On the outskirts, Syrian government forces have recently been deployed at the request of Kurdish authorities, who hope that a regime presence will help stave off a Turkish incursion into population centers. Russia has also dispatched military police to the area.
Turkey have launched a broad assault on Kurdish-controlled areas in northeastern Syria since October 9.
International humanitarian workers have also been leaving northeast Syria in recent days. Doctors without Borders (MSF), Mercy Corps and Save the Children all said that they had evacuated foreign staff.
On Tuesday, Kurdish officials said the departure of aid workers and NGO staff had led to a “complete interruption of humanitarian aid.” Yet international groups say they have not ceased all operations though they have downsized them significantly due to security risks .
For Kurdish civil society members, this means they need all hands on deck.
Until last week, PEL Civil Waves was not an aid organization. It was a civil society group in northeastern Syria that organized youth forums and peacebuilding programs. But since Turkey launched its incursion into the Kurdish-controlled region of Syria last week, the organization’s staff and volunteers have been at the forefront of the emergency response.
“Suddenly we found ourselves in confrontation of this big crisis and we decided to stop all our activities and all our projects and invest all our resources to help people,” said Ferhad Ahma, director of PEL Civil Waves.
For some Kurdish activists, already coming to grips with a sudden US military withdrawal from the area, the departure of humanitarian workers means they have been twice abandoned.
“The role of the international organizations was meant to show at a time like this, and not when things were calm,” Mohammed said. “But when they were truly meant to play their role, they fled.”
“The humanitarian situation is extremely dire,” said Qadriya Mohammed, adding that her organization GAV4RD is facing medicine and food shortages.
But for international organizations, rapidly-changing realities in the area have made their work untenable. Organizations are assessing “whether it’s safe for aid workers to continue to operate in the region,” said Karl Schembri, the Norwegian Refugee Council’s media adviser in the Middle East.
“Whole displacement camps have been evacuated due to the escalating violence,” Schembri said.
“Cross-border deliveries have been significantly reduced because of insecurity,” said Schembri. Only a few groups, such as the Erbil-based Barzani foundation, have sent a humanitarian aid convoy across the border, according to PEL.
Ahma said it is not just aid deliveries that are at risk as myriad forces advance through northeastern Syria. “Lot of activists will be surrounded and there will be a real danger for (their) life,” he said.
Save the Children says local employees — the majority of their staff — have not left the area. Their programs are still operational “so far,” said Joelle Bassoul, Save the Children’s regional media manager.
“If we have to, we’re going to ask local folk for help, since the international community is absent,” said Mohammed. “We can only rely on ourselves. We’re going to stand shoulder to shoulder to help the displaced ourselves.” 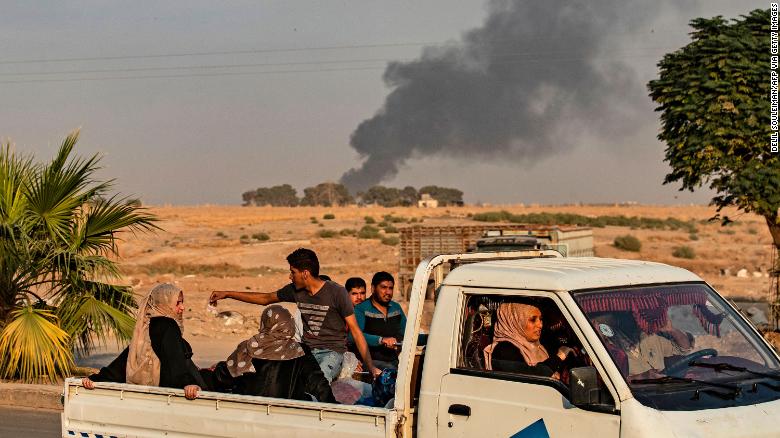 Civilians ride a pickup truck as smoke billows following Turkish bombardment on Syria’s northeastern town of Ras al-Ain.
Mercy Corps announced Monday that it was puling international staff out of the area. “We just cannot effectively operate with the heavy shelling, roads closing, and the various and constantly changing armed actors,” Deputy Country Director for Syria Made Ferguson said in a statement, adding they are exploring options for getting aid to those in need and “will make every effort to return as soon as possible.
MSF echoed this statement, announcing it was evacuating foreign staff, who will continue to support local staff remotely.

A population in limbo

Strikes have been continuous since the start of the incursion, and many civilians remain trapped, said activist Diljeen Ali in Qamishli. “There are people crying from starvation,” said Ali. “There are people who can’t be reached. There are buses being hit.”
Reports of Turkey-backed Syrian Arab rebels looting villages are rampant. On Tuesday, the UN’s refugee agency (UNHCR) released a statement reporting attacks on medical facilities and other civilian infrastructure including powerlines, water supplies and bakeries. Last week, a prominent politician, her driver, members of Kurdish security forces and several civilians were executed by the Free Syrian Army, the SDF said. The FSA denied the claims.
The Kurdish Red Crescent said Wednesday that 42 civilians have been killed and 145 injured.
Airstrikes, ground-based strikes and sniper fire are causing civilian casualties every day, UNHCR said.
Locals have watched with trepidation, activists say, as US troops make their sudden exit, and Syrian government troops return after years of absence.
“We’re glad that the regime is coming in because this delegitimizes Turkey’s incursion,” said Ali. “But we’re also scared that this means our men will be forced to join the Syrian army, and the government (will) change things for us, like remove Kurdish curriculum from our schools.”
For the lawyer from Ras al-Ain, the regime’s return is less than ideal — but it is better than “slaughter.”
“I can’t say that the regime is better than this, but the choices in front of the autonomous (Kurdish) administration have narrowed,” he said. “It is our only alternative to slaughter.”

Clarification: This post has been updated to clarify that the correct transliteration of the name of an organization mentioned in this piece is GAV4RD.

July 15, 2020
President Donald Trump announced the arrest of key figures of the MS-13 international gang Wednesday in New York and Nevada and said the Department...

July 15, 2020
The first coronavirus vaccine to be tested in the U.S. boosted the immune systems of the study's participants and is being hailed a major step...

July 14, 2020
The commutation of Roger Stone’s sentence may have more profound legal implications, and the Redskins changing their name may have more cultural significance. But the...
0FansLike
0FollowersFollow