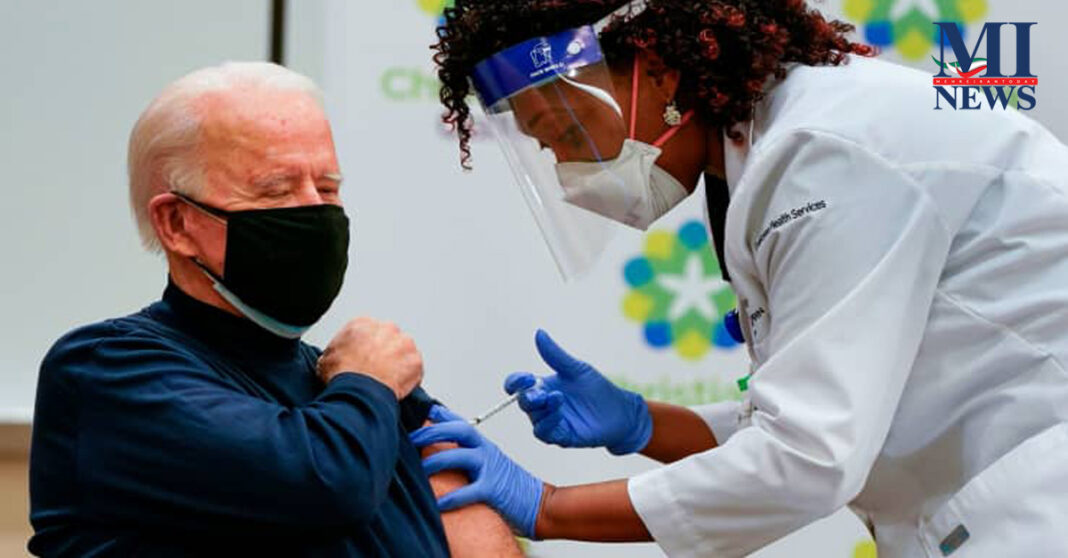 President-elect Joe Biden received a Covid-19 vaccine on live television Monday afternoon in a demonstration intended to encourage Americans to receive shots of their own when they can.

“There’s nothing to worry about. I am looking forward to the second shot,” Biden said from a hospital in Delaware.

Jill Biden, the incoming first lady, received a dose of the vaccine earlier in the day. Vice President-elect Sen. Kamala Harris of California and her husband, Doug Emhoff, will be vaccinated next week.

Biden’s vaccination, administered by Tabe Masa, the head of employee health services at ChristianaCare Hospital, comes as officials race to inoculate Americans around the country in the hopes of getting the rapidly spreading virus under control.

Covid-19, which has killed more than 300,000 in the U.S., upended the nation in 2020, freezing large parts of the economy and transforming the traditional process by which candidates campaign for the presidency.

Biden, more than his rival, President Donald Trump, was careful to avoid spreading the virus during the course of his bid, largely eschewing big events and suspending door-to-door campaign activities.

After receiving the vaccine, Biden credited the Trump administration for its work, saying it “deserves some credit getting this off the ground with Operation Warp Speed.”

“We owe these folks an awful lot, the scientists and the people who put this together, the front line workers, the ones who actually did the clinical work. It’s just amazing,” Biden said.

Biden received the first dose of the vaccine made by Pfizer, the first to be approved by U.S. regulators. A second vaccine, made by Moderna, began being shipped around the country over the weekend. Both require two doses to be administered several weeks apart.

Public health officials have said they are aiming to vaccinate as many as 20 million people in the remaining weeks of 2020, but have cautioned that it could be months before most people can receive shots.

Biden, among the first Americans to receive a vaccine, acknowledged that long time frame.

Trump, who was hospitalized with coronavirus in October, has yet to receive a vaccine.

Surgeon General Jerome Adams explained on Sunday that Trump had not received the vaccine because he had recently been treated with monoclonal antibodies.

“That is actually one scenario where we tell people, ‘Maybe you should hold off on getting the vaccine, talk to your health provider to find out the right time,’” Adams said on CBS News.

WHO Warns Against Lifting COVID-19 Restrictions Too Early

Iran Vice President Is One of 7 Officials to Contract Coronavirus