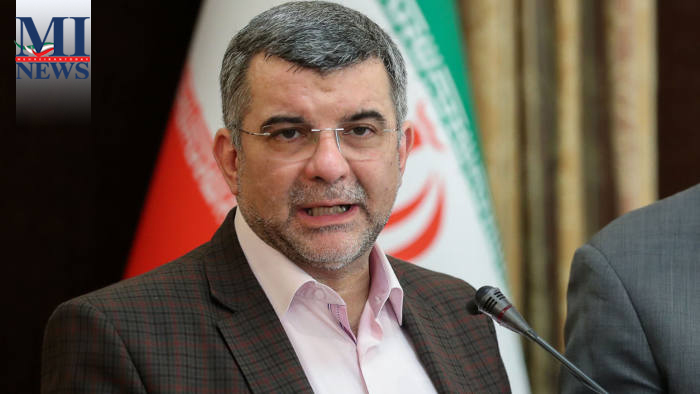 Iran’s deputy health minister has tested positive for coronavirus a day after sweating heavily at a press conference, as the Islamic Republic recorded the largest number of deaths linked to the disease outside China. Speaking in a video posted on local media on Tuesday, Iraj Harirchi insisted that the Iranian government was able to contain the spread of the virus. At least 15 people in Iran have now died from coronavirus, the government has said, up from 12 on Monday, authorities said. “I wanted to tell you that I am also infected with the coronavirus. I had a fever yesterday and the initial test was positive last night after which I immediately isolated myself,” Mr Harirchi said. “Be confident that . . . we will defeat the virus in the coming weeks . . . We have medical treatment capabilities [to cure it].” A short video of Mr Harirchi at a press conference on Monday shows him repeatedly wiping his face with tissues. He is stood next to Ali Rabiei, the government spokesman. With Iranian authorities battling high levels of public distrust about their handling of the virus, Mr Rabiei said on Tuesday that “the best medicine to cure the coronavirus is trusting each other and trusting the medical system”. Mahmoud Sadeghi, a member of parliament, also said he had tested positive. It is not clear if more senior officials are infected. The spread of Covid-19 has deepened the isolation of the Islamic republic, already under US sanctions. Turkey closed its land border with Iran over the weekend and Turkish Airlines — the leading foreign airline in the country — has stopped all flights to and from Iran. Other neighbours — including Iraq, Afghanistan, Armenia and Pakistan — have imposed restrictions on border crossings and trade. Only two foreign carriers, Emirates airline and Qatar Airways, are still flying to Iran. The origin of the virus in Iran is in the holy city of Qom, 140km south of Tehran and home to 1.2m people, including hundreds of thousands of clerical students. It is believed that hundreds of Chinese clerics study in Qom’s religious schools. The senior clergy in Qom have so far refused to allow the shrine, which receives many visitors daily, to be shut down. An aide to one of the most senior grand ayatollahs in Qom, Mousa Shubairi Zanjani, is reported by local media to have died of the virus. The virus is present in more than a third of Iran’s 31 provinces, according to IRNA, the official news agency. Recommended ExplainerCoronavirus What does coronavirus do if you catch it? The government has temporarily shut down schools, universities and religious schools and there have been public calls to quarantine Qom and close all public events and spaces such as football matches, gyms and restaurants until the Persian New Year on March 20. Farhad Majidi, the coach of Esteghlal football club, voiced the concerns of many when he said on social media: “Are officials waiting for one of us [football players] to die and then think of a solution?” People in Tehran have been panic buying food, facial masks, sterilisers and disposable gloves and many pharmacies have notices in their windows saying they have run out of stock. Iran’s ministry of defence this week said it would produce 20,000 litres of liquid sanitisers daily and would soon start supplying the market with standard facial masks. “Officials can easily have access to the test kits and save their lives. How about ordinary people who are dying every day?” said Abolfazl, a university student. “God bless us with these inefficient officials.”

Many Americans may have to wait months for coronavirus relief checks

April 2, 2020
The Chinese government has deliberately underreported the total number of coronavirus cases and deaths in the country, the U.S. intelligence community told the White...

Many Americans may have to wait months for coronavirus relief checks

April 2, 2020
The first Americans to get relief payments from the government under the coronavirus legislation signed into law last month won’t see the money until at least the week...

April 2, 2020
A record 6.65 million U.S workers filed for unemployment compensation last week as businesses large and small shut their doors in the face of...
0FansLike
0FollowersFollow

Trump says he wants the country ‘opened up and just raring...