Home News Iranian Officials Slam Deal Of The Century, Call On ‘All Muslims’ To... 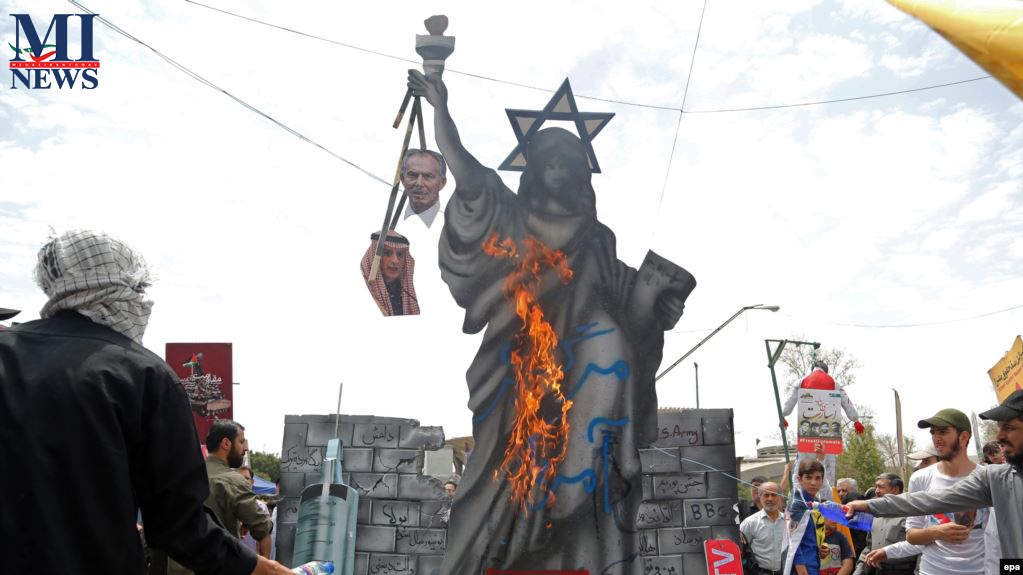 In a move consistent with The Islamic Republic’s decades-old policy regarding the Israeli-Palestinian issue, and Tehran’s anti-US stance, Iranian officials have harshly criticized U.S. President Donald Trump’s “Deal of the Century”.

Traditionally, the Islamic Republic has opposed all international plans to solve the Israel-Palestinian conflict throughout the past four decades.

The Speaker of the Iranian Parliament Ali Larijani wrote a letter to the heads of parliaments around the world describing Trump’s Deal of the Century as “disgusting,” and “in violation of all international agreements and laws including the UN Charter.”

Larijani said the deal “ensures the continuation of occupation of Palestine” and promised that “Muslim nations and countries will confront the imposition of this unilateral deal.”

He also accused the U.S. President of acting based on his personal interests rather than consulting the UN or the Palestinian side.

Like other Iranian officials, Larijani also echoed Iranian Supreme Leader Ali Khamenei’s idea of holding a referendum in the Palestinian territories to determine the fate of Palestinians.

Iran’s Foreign Minister Mohammad Javad Zarif on Tuesday slammed the U.S. plan as “a nightmare for the region.” He wrote in a tweet that the Vision for Peace “is simply the dream project of a bankruptcy-ridden real estate developer.” Zarif further hoped that deal would be “a wake-up call for all the Muslims who have been barking up the wrong tree.”

In an earlier tweet on Monday, Zarif characterized the Deal of the Century as “an illusional plan that is dead on arrival.”

Repeating the idea of holding a referendum in the Palestinian territory, Zarif suggested that “Instead of a delusional ‘Deal of the Century’—which will be D.O.A.—self-described ‘champions of democracy’ would do better to accept Iran’s democratic solution proposed by Ayatollah Khamenei.”

Meanwhile, Iranian Foreign Ministry Spokesman Abbas Mousavi expressed Iran’s official view Tuesday morning. He said: “The Zionist regime is an occupying regime and the only solution to solve the Palestinian crisis is a referendum among all main residents of the Palestinian land and such vicious plans are doomed to failure.”

Mousavi who spoke before Zarif and Larijani, called on “all free nations and governments in the region and across the world to counter Trump’s “disgraceful” scheme.” However, he regretted that “some Muslim countries have forgotten the Palestinian cause,” adding that such an attitude will undermine “the future and prestige of Muslims and Islamic countries.”

Khamenei’s office belatedly posted a series of tweets on the issue Tuesday afternoon which appear to have been taken out of his previous speeches. His new comments about the matter could be included in one of his usual speeches on any Wednesday.

In the tweets Khamenei said “The Deal of the Century will never bear fruit,” and called the “Jewishization of Qods” a “foolish and unwise” act. He reiterated that “The Palestinian nation and all Muslims will definitely stand up to them and not allow the so-called Deal of Century to be realized.”

Usually, as it works in Iran, during the first hours after a development like the announcement of the Deal of the Century, everyone who considers himself or herself a politician says something about the matter which may not necessarily reflect the views of the government. Later, the Foreign Ministry Spokesman offers the regime’s attestation in the matter.

All later comments, including Friday prayers sermons, are likely to embody one or more of the three arguments. Naturally, those who take a more hardliner stance on the issue, including military officials, will focus on the confrontational part, calling on other nations to resist Trump’s idea.

However, in this particular case, any comment by officials or any analysis by the media are also mixed with the usual anti-U.S. and anti-Trump jargon while also marking the Islamic Republic’s antagonistic opposition to the existence of Israel.

Traditionally, the Islamic Republic has opposed all solutions to the Israel-Palestinian conflict throughout the past four decades. Ayatollah Khamenei came up with the idea of referendum inspired by former ultraconservative President Mahmoud Ahmadinejad but put it forward after his Presidency.

Khamenei has also predicted that the state of Israel will cease to exist in less than 25 years and some Iranian officials including a former President have vowed to wipe Israel off the map. The Islamic Republic’s death wish for Israel was also written in Hebrew on Iranian missiles in 2015.

In the Islamic Republic jargon, the Middle East conflict is between Israel and Islam. The myth trumpeted by Iranian officials is that all Palestinians are Muslim and Arab. The misconception is rooted in Iranian revolutionaries’ ties with radical militant Palestinians who trained them in the Beka valley in Lebanon in late 1960s and early 1970s.