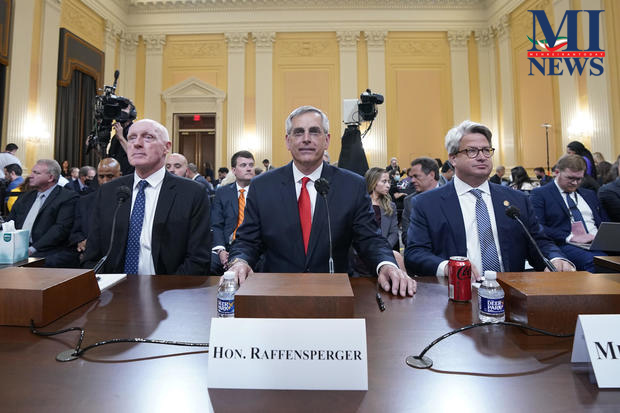 The House select committee investigating the Jan. 6, 2021, attack on the U.S. Capitol reconvened Tuesday for the next in a series of public hearings this month. This hearing is focusing on former President Donald Trump’s efforts to pressure officials in Arizona and Georgia to overturn the 2020 election results.

Committee chair Rep. Bennie Thompson said in his opening statement that “pressuring public servants to betray their oaths was a fundamental part” of Trump’s “playbook.”

Thompson said Trump’s pressuring of these election officials was based on the “big lie.”  “The lie hasn’t gone away. It’s corrupting our democratic institutions,” Thompson added, specifically noting that a New Mexico county official refused to certify the recent primary results.

Thompson, vice chair Rep. Liz Cheney and committee member Rep. Adam Schiff all noted in their opening statements that the democratic institutions held despite Trump’s falsehoods – but it could “break under pressure.”

“The system held, but barely,” Schiff said. “And the system held because people of courage, Republicans and Democrats, like the witnesses we will hear today, put their oath to the country and the constitution above any other consideration.”

Trump lost both Georgia and Arizona to President Biden, but he and officials with his reelection campaign pushed top officials in those states to overturn the election results, in part through a scheme to submit alternate, pro-Trump slates of electors.

Trump lost both Georgia and Arizona to President Biden, but he and officials with his reelection campaign pushed top officials in those states to overturn the election results, in part through a scheme to submit alternate, pro-Trump slates of electors.

In Georgia, Trump urged Raffensberger in a Jan. 2, 2021, phone call to “find” enough votes to make him the winner, though Raffensperger repeatedly rebuffed the president’s efforts and refuted claims of widespread voter fraud in Georgia.

Both Raffensperger and Sterling defended the integrity of Georgia’s election and faced intense criticism for their actions, receiving death threats and, in the case of Raffensperger, a censure by the state Republican Party. Despite the backlash, Raffensperger defeated Trump-backed Rep. Jody Hice and two other candidates who challenged him in the Republican primary last month for secretary of state.

The two election officials also testified this month before a special grand jury in Fulton County that is investigating Trump’s efforts to overturn the results of the election.

Trump accused Moss, the Fulton County election worker, and her mother of carrying out a fake ballot scheme and called them professional vote scammers, allegations that led to death threats and intimidation, and forced them into hiding, committee aides said.

According to the written testimony obtained by CBS News ahead of the hearing, Moss will say she and mother have been “under attack” just for doing their jobs as a result of the baseless claims spread by Trump, Giuliani and their allies.

In Arizona, Bowers, who backed Trump in 2020, received a call from Trump and Giuliani, the former president’s lawyer, in late November 2020 urging him to have the state legislature substitute a slate of presidential electors, overriding Mr. Biden’s win in the state, according to the Arizona Republic.

Bowers also received an email from Ginni Thomas, a conservative activist and wife of Supreme Court Justice Clarence Thomas, in early November 2020 urging him to select a “clean slate of electors,” according to the Washington Post. The committee has asked to speak with Thomas, and she told The Daily Caller she looks forward to talking with House investigators.

Testimony from Trump White House officials, including former chief of staff Mark Meadows, is expected to be heard during Tuesday’s hearing.

Earlier hearings have focused on the violence that took place at the Capitol on Jan. 6 as law enforcement struggled to control the mob of Trump’s supporters descending on the complex to stop Congress’s counting of state electoral votes; Trump’s decision to declare victory on election night even though his closest aides knew there was no evidence to support his claims the election was stolen from him; and the former president’s efforts to strong-arm Vice President Mike Pence to reject state electoral votes and unilaterally declare him the winner of the election.

In its third hearing last week, aides to the former vice president said Trump’s repeated lies about the election pushed the country to the brink of a constitutional crisis and put Pence in harm’s way when a mob of Trump supporters breached the Capitol building.

“Approximately 40 feet. That’s all there was, 40 feet between the vice president and the mob,” Rep. Pete Aguilar, a Democrat from California, said last week. “Make no mistake about the fact that the vice president’s life was in danger.”

Trump, meanwhile, has continued to attack the committee and falsely claim he won the 2020 election. During remarks Saturday in Memphis as part of the “American Freedom Tour,” Trump claimed without evidence the committee is doctoring video of depositions and accused its members of being “liars and con artists.”

New IAEA Chief Says He Will Act ‘Independently’ When Asked About...

Biden and Trump to tangle in Tampa on Thursday