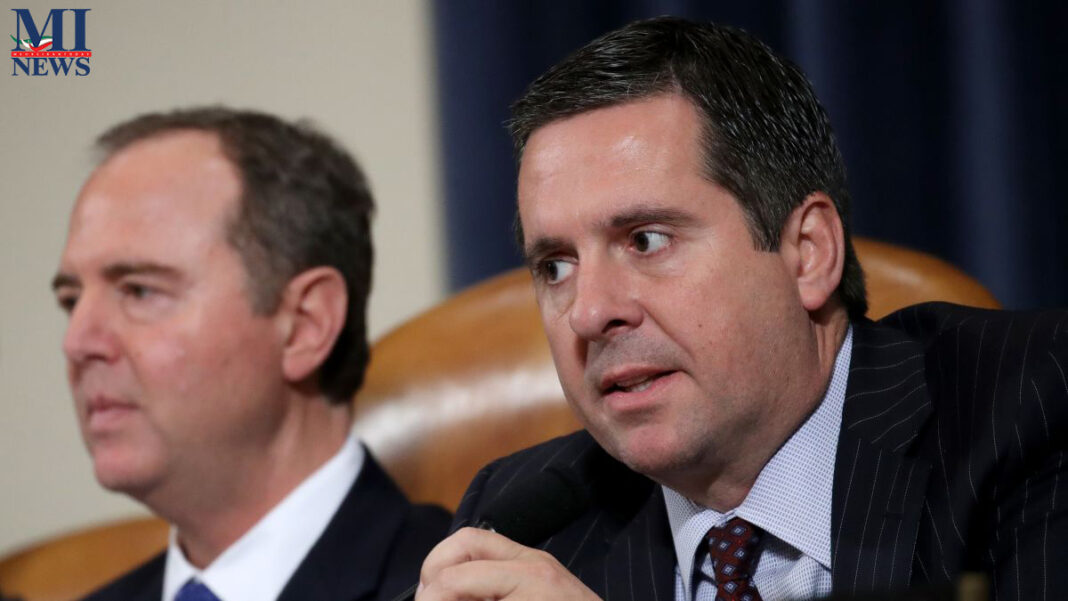 Republican lawmakers vocally objected to an intelligence briefing assessment that Russia prefers President Donald Trump to win in 2020 — and Rep. Devin Nunes of California, a close Trump ally, told the President about the election meddling briefing afterward, according to a person familiar with the matter.

Trump was irritated that he had to learn about the briefing — in which lawmakers were warned the intelligence community believes Russia is already taking steps to interfere in the 2020 election with the goal of helping Trump — from a lawmaker and not from his own officials, the person said.
The President expressed frustration that “it’s happening again,” the person said, referring to his perception that political rivals, including House Intelligence Chairman Adam Schiff, were able to weaponize intelligence related to Russia.
Trump’s Republican allies pushed back during the briefing against the assessment that Russia was helping Trump, arguing that the President has been tough on Russia, according to a source familiar with the matter.
Trump’s reaction to the briefing has set off a new firestorm over how the President will handle Russia’s efforts to meddle in the 2020 presidential election — and if he will take steps to curb US efforts to stop Russia in 2020.
The US intelligence community believes Russia’s 2016 election interference was aimed at boosting Trump’s candidacy and hurting his opponent, Hillary Clinton. Trump has repeatedly downplayed Russia’s election meddling and has dismissed any suggestions that the Kremlin played a role in his election.
Trump on Twitter Friday accused Democrats of a “misinformation campaign.”
“Another misinformation campaign is being launched by Democrats in Congress saying that Russia prefers me to any of the Do Nothing Democrat candidates who still have been unable to, after two weeks, count their votes in Iowa. Hoax number 7!” Trump tweeted.
At a meeting last week following the briefing, Trump became irate toward outgoing acting Director of National Intelligence Joseph Maguire over the classified briefing to the House Intelligence Committee, a White House official said, for allowing the information about Russia’s meddling to be included.
US Ambassador to Germany Richard Grenell was tapped this week to replace Maguire as acting intelligence chief.
Democrats are raising fresh concerns about the appointment of Grenell, who does not have intelligence experience — and whether it was made in reaction to Trump’s anger toward Maguire over the briefing.
“Now all of a sudden, senior people in the intelligence community may be thinking that if I give honest intelligence — if I can take you back, you know, 15 years or so, 20 years, there are no weapons of mass destruction, President George W. Bush — that my career might suffer,” Rep. Jim Himes, a Connecticut Democrat, said on CNN’s “New Day.” “And when that happens, this country is in a very, very bad place.”
Trump on Thursday evening floated another close ally, GOP Rep. Doug Collins of Georgia, as under consideration to be his permanent director of national intelligence, but Collins, who is running for Senate against GOP Sen. Kelly Loeffler, said Friday morning on Fox News he did not want the job.
Nunes’ role in telling Trump about the briefing was first reported by The Washington Post.
Last week’s briefing, led by election security official Shelby Pierson, was fairly comprehensive about Russia’s meddling efforts, sources familiar with the matter said. In the briefing, the intelligence community briefer said twice that the IC’s observation is that Russia has a preference for Donald Trump, one of the sources said.
“The briefers were not ambiguous about the Kremlin having a preference for Trump,” said the source, while underscoring that intelligence briefers never say anything is clear — they simply provide an assessment.
Republicans pushed back on the assessment.
Rep. Will Hurd, a Texas Republican asked Nunes for some time for questioning, and pressed the briefer about what led to that statement and how many intelligence reports showed it.
The briefer responded that they did not have the underlying data, just the assessment, the source said.
GOP Reps. Brad Wenstrup of Ohio and Chris Stewart of Utah, who was floated as a possible intelligence chief pick, argued it could not be true because there had been no president as tough on Russia.
Democrats interceded and said that was debatable, but argued that a classified briefing in was not the place to do it.
Democrats said since the matter was controversial and sensitive, they also wanted to see the underlying data, not just the assessment, according to the source.
A source with knowledge of the briefing last week said the raw underlying intelligence is not brought to these types of briefings, just the assessment the intelligence community has reached based off the information collected. This is done to order to protect sources and methods, the source said.
“The briefers never have the raw intelligence with them. That has information that could expose sources and methods. There is likely a lot of it,” the source said, adding that the second part of the process included analysts that review the material and peer reviews to challenge the basis of the assessment.
Original Source

IRGC Intelligence ‘Brings Back’ Fugitive Who Owes $400 million To Iran...