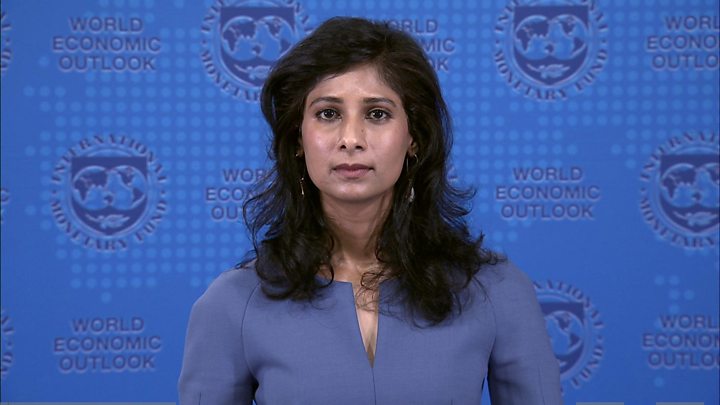 The International Monetary Fund (IMF) has cut its growth forecasts for the global economy for this year and next.

Growth “remains subdued”, the IMF says, and there is an urgent need to reduce trade and technology tensions.

The revision for the UK reflects what the report calls a stronger-than-expected first three months of the year, boosted by pre-Brexit stockpiling.

Next year, the report predicts 1.4% growth. The UK forecasts are based on an assumption of an orderly Brexit followed by a gradual transition to the new regime. As the report notes, what this will be remains highly uncertain.

The IMF named a no-deal Brexit as one of the key risks to global economic growth.

“The principal risk factor to the global economy is that adverse developments – including further US-China tariffs, US auto tariffs, or a no-deal Brexit – sap confidence, weaken investment, dislocate global supply chains, and severely slow global growth below the baseline,” the Fund said.

In an interview with the BBC, the IMF’s chief economist, Gita Gopinath, said: “Global growth is sluggish and precarious. But it doesn’t have to be this way because some of this is self-inflicted”.

The report is, by implication, strongly critical of US President Donald Trump’s approach to trade policy.

It says countries should not use tariffs – taxes on traded goods – to target bilateral trade balances, or as a substitute for dialogue to pressure others for reform.

Both these strategies are being employed by the Trump administration in its more assertive approach to trade policy.

It has sought to pressure other countries to takes steps to reduce the deficit the US has with them; to export less to the US or import more.

The official objective of the tariff increases directed against Chinese goods was reform. The Trump administration wanted China to take action to stop what the US sees as unfair subsidies and the unfair acquisition of American companies’ technology.

The IMF also calls for the uncertainty surrounding trade agreements to be resolved quickly, including Brexit and the free-trade area encompassing the US, Canada and Mexico.

The report describes inflation as muted. That, together with the subdued growth means that the low interest rate policies pursued in many countries are appropriate.

Japan and the eurozone both have one of their central bank interest rates below zero. In the financial markets, the European Central Bank and the US Federal Reserve are thought to be likely to cut rates in the coming months – next week in the case of the US.

The IMF predicts that the US economy will see a significant slowdown as the stimulus from tax cuts fades. After 2.9% growth last year, it predicts 1.9% in 2020.

The largest forecast downgrades were in some of the major emerging economies, including Brazil where there is uncertainty about pension and other reforms, and South Africa, which is affected by strikes, energy supply problems and weak agricultural production.

There was also a smaller forecast downgrade for both years for China which partly reflects the trade tension with the US.

The somewhat quicker global growth predicted for next year is based mainly on an expected improvement in four severely stressed emerging economies – Turkey, Argentina, Iran and Venezuela. That, Ms Gopinath says, is subject to high uncertainty.