Home News Fighting Intensifies in Nagorno-Karabakh, Turkey Testing Both Russia and US 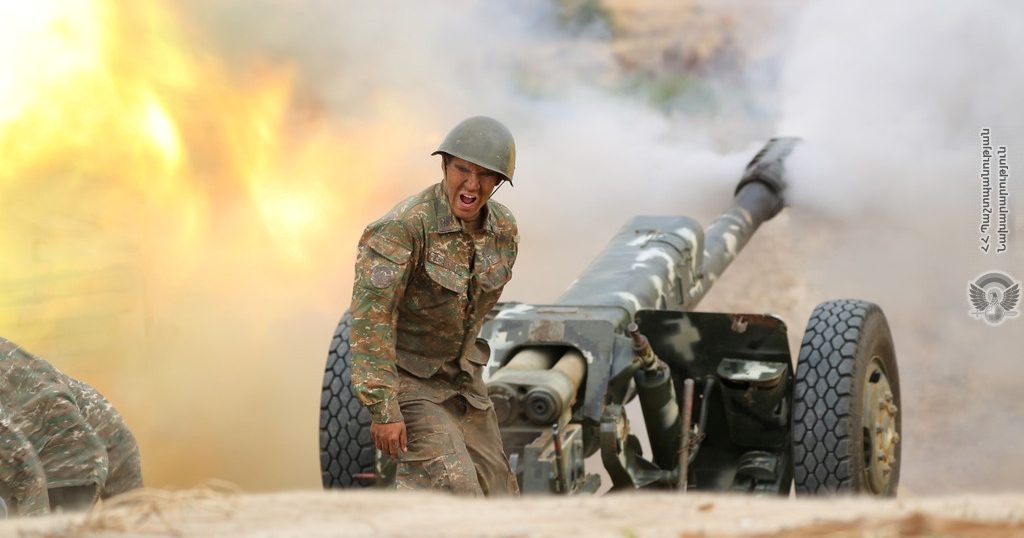 Armenia and Azerbaijan are accusing each other of targeting civilian populations in a dangerous flare-up over the disputed separatist enclave of Nagorno-Karabakh.

As the newly reignited conflict intensifies in a second week of fighting diplomats from Moscow to Paris are scrambling to try to persuade the warring sides to agree a ceasefire. But missiles and rockets continue to rain down — despite a call, too, from the United States, for a halt to the fighting.

The enclave, which is inside Azerbaijan’s borders but enjoys de facto independence and has an Armenian majority, has not seen such heavy clashes since the early 1990s, when as many as 30,000 people lost their lives before a ceasefire largely brokered by Moscow left the dispute frozen.

And fears are mounting that it will not be easy this time either to secure a rapid end to the hostilities, which has seen dozens already killed. Observers fear the clashes are one step away from a broader war in the Caucasus that risks embroiling Russia and Turkey on opposing sides in yet another conflict, adding Nagorno-Karabakh to the list comprising Syria and Libya as theaters of competition between Moscow and Ankara.

While Armenia has said it is ready to discuss a ceasefire, Azerbaijani President Ilham Aliyev has so far shrugged off talk of a truce and appears determined to press on with a military campaign involving heavy artillery, tanks and drones to wrest control of Nagorno-Karabakh and seven other Armenian-controlled territories adjacent to the enclave.

Some analysts say Azerbaijan has been emboldened by its ally Turkey and fear his hardline position will make it much more difficult to negotiate a truce. Aliyev set uncompromising conditions Sunday for a halt to the fighting, saying Armenian forces “must leave our territories, not in words but in deeds,” apologize to the Azerbaijani people and recognize the territorial integrity of Azerbaijan.

Armenia is not likely to accede to such conditions, say western diplomats.

The territorial dispute has its origins in the disintegration of the Soviet Union, when Nagorno Karabakh, encouraged by Armenia, declared independence from Azerbaijan, triggering a violent conflict which ended in the 1994 ceasefire. Since 1994, there have been episodic clashes with 300 border incidents in the past five years alone.

Long-running talks overseen by France, the US and Russia as co-chairs of the Organization for Security and Co-operation in Europe, OSCE, Minsk Group have stalemated.

Fighting between Azerbaijani and Armenian forces, including Nagorno-Karabakh fighters, erupted on 27 September after months of smaller border clashes. The territory, which is crisscrossed by energy pipelines, is of strategic importance to Russia, Turkey and Iran.

While both sides blame the other for this latest blood-letting in one of the world’s most intractable conflicts, Azerbaijan appears to have been preparing an offensive for some time, aiming to reverse the territorial gains made by Armenia in the 1990s. “Baku may have chosen to advance now in the hope of recovering more territory in the face of an inert negotiating process and a distracted international community,” according to the International Crisis Group, a Brussels think tank.

“Russia, potentially with European support, probably stands the best chance of brokering a ceasefire,” ICG said in a statement. Moscow has a formal mutual defense pact with Armenia as well as an air base in the country, but it enjoys close ties with Baku, too.

Turkey has close ethnic, religious and linguistic ties to Azerbaijan. Ankara is suspected of supplying armed drones to Baku and has been accused by Armenia and western Europe governments of recruiting Syrian rebels to fight in Nagorno Karabakh, a charge the Turks have denied.

“While, as usual, most countries are calling for de-escalation and a ceasefire, for the first time, a major power and neighbor—Turkey—is openly backing one of the parties to the conflict, Azerbaijan,” according to Thomas de Waal, an analyst with the think tank Carnegie Europe. In the past Turkey has acted as a brake on Azerbaijan, he says. “Those days are now over, and the geopolitical equilibrium that prevailed around the conflict is broken,” de Waal adds.

Armenia, Azerbaijan Trade Accusations in Nagorno-Karabakh Dispute
Fighting between the two countries escalates over the enclave, with both sides accusing the other of using Syrian fighters

Nagorno-Karabakh is now appears to be figuring in the regional ambitions of Turkish President Recep Tayyip Erdoğan, who has made no secret of his wish to restore Turkey’s past Ottoman greatness and regional influence. In a speech last week before the Turkish parliament, he claimed provocatively that on the grounds of its Ottoman past, “Jerusalem is ours — one of our cities.” And, in the fiery speech, Erdoğan condemned as “unacceptable” Putin’s call for an immediate cease-fire in Nagorno-Karabakh.

Not since Turkey downed a Russian Su-24 warplane in 2015 on the Turkey–Syria border, have relations between Moscow and Ankara looked so shaky. “Russia and Turkey are at the same time companions and competitors. In some cases, they are even direct opponents,” says Andrey Kortunov of the Russian International Affairs Council.

But in the past few years they have managed to compartmentalize the theaters they are competing in — or to use them as bargaining chips to reach agreement for mutual advantage. But “the logic and dynamics of Turkey’s current foreign policy continue to place Erdogan in the middle of a minefield, where any step could prove fatal for his relations with Vladimir Putin,” he adds.

Some Russian analysts suspect  Erdoğan might be close to stepping on a mine.

Competing in Syria or Libya is very different from a face-off between Moscow and Ankara in the Caucasus, considered by the Kremlin its own backyard, they say.

Evgeny Primakov, head of a Russian government agency and the grandson of a former Russian prime minister and intelligence chief, noted in a commentary in Russia Today that Moscow is not likely to take kindly to “a very difficult partner, to put it diplomatically,” becoming “embedded and at ease on territory we have always considered our underbelly.’’ That could be one foreign intervention too far for Erdoğan, whose overseas adventurism has also to contend with a weakened Turkish economy and currency.

The US has so far adopted the same neutral stance observed by Moscow, echoing the Kremlin in calling for a return to the negotiating table.

Washington has little leverage with Azerbaijan. US security assistance to Azerbaijan dropped in 2020 to a paltry $247,550, from an already low $3.67 million in 2019. But the political influence of Armenian-Americans shouldn’t be discounted, though, analysts say. From 1992 to 2010 Washington channeled nearly $2 billion in financial support to Armenia, the highest per capita amount given by the US to any post-Soviet state — and that was largely thanks to lobbying by the Armenian diaspora in the US.

Armenian-Americans also secured a major political victory in last year in persuading the US Congress to label as genocide the slaughter of an estimated 1.5 million Armenians by the Ottoman Empire a century ago. The Trump administration refrained from endorsing the congressional resolution, fearing that doing so would place it in an awkward position with NATO ally Turkey, according to White House aides.

Once again Armenian-Americans are springing into action lobbying lawmakers and the White House to take a firmer line against Azerbaijan — among them reality TV star Kim Kardashian and her husband Kanye West, vocal supporters of Donald Trump.

And there are signs the Trump administration is starting to lose patience with Erdoğan.

While urging third parties last week to stay their hand in Nagorno-Karabakh, US Secretary of State Mike Pompeo aimed some criticism at Turkey for fueling the dispute, expressing concern that Syrian mercenary fighters have been recruited by Ankara to fight. “We (already) saw Syrian fighters taken from the battlefields in Syria to Libya,” he said, adding that it “created more instability, more turbulence, more conflict, more fighting, less peace. I think it would do the same thing in the conflict in and around Nagorno-Karabakh as well. So, I hope that reporting proves inaccurate.”

Pentagon Says 34 US Troops Diagnosed with Traumatic Brain Injuries After...