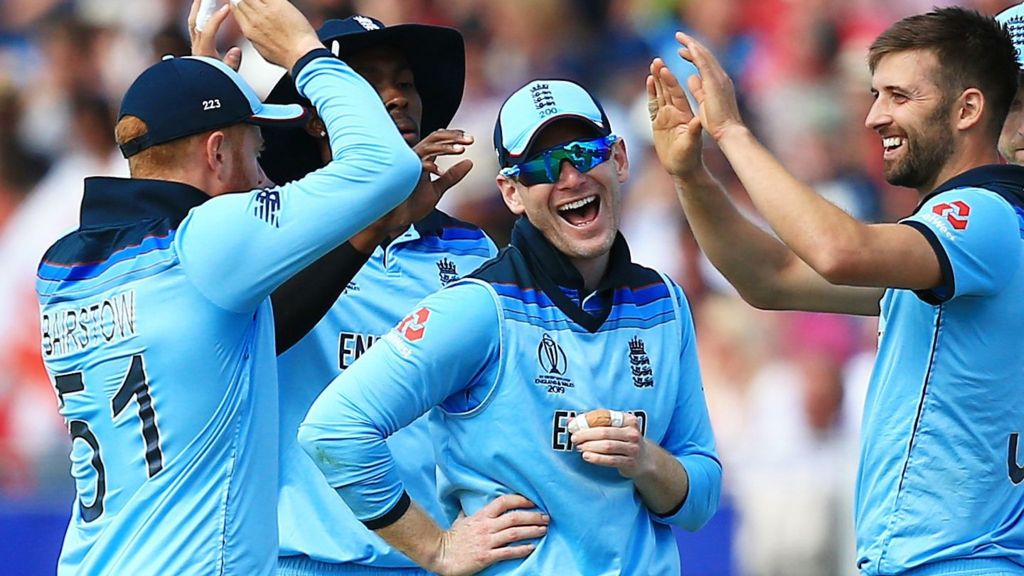 England surged into their first World Cup semi-final since 1992 with a comprehensive 119-run defeat of New Zealand at Chester-le-Street.

The hosts are set to finish third in the group and will meet India or Australia at Edgbaston next Thursday for a place in the final.

Needing to defeat the Black Caps to be sure of progressing, England were led by Jonny Bairstow’s dominant hundred, his second century in the space of four days.

Though they were checked as the New Zealand bowling improved, the England total of 305-8 seemed imposing on a pitch that gradually got harder to bat on.

And they were boosted by the run outs of both Kane Williamson and Ross Taylor – Williamson unluckily undone when backing-up – that left New Zealand 69-4.

From there, the Black Caps sucked the life from the spectacle with a limp attempt to defend their net run-rate, eventually being bowled out for 186 with Mark Wood taking 3-34 on his home ground.

Williamson’s men have now suffered three successive defeats and slipped to fourth in the table.

They will be caught if Pakistan beat Bangladesh on Friday, though it would need an almost impossible swing in run-rate to deny them a place in the semis.

Back-to-back defeats by Sri Lanka and Australia left England on the brink of an unthinkable exit, but they have responded with impressive wins over India and New Zealand, two fellow members of the top four.

Whereas Sunday’s victory at Edgbaston was played in front of a crowd ferocious in its support of the Indians, here they were willed on by a loyal following in the Durham sunshine.

Eoin Morgan once again had the benefit of winning an important toss. Not only did batting seem easier early in the day – though that could have been due to the excellence of Bairstow and Jason Roy – their three losses have come when chasing.

With a score on the board, England, again fielding four frontline pace bowlers, were a constant threat with the ball and superb in the field.

England began the World Cup as the top-ranked side and favourites. Now they are playing well enough to justify both tags they will be feared in the semis, especially if they bat first.

It is no coincidence England have got back to winning ways since Roy returned from a hamstring injury to resume his dependable opening partnership with Bairstow.

Indeed, there was a sense of inevitability about the result from as early as the first over, when Roy hit left-arm spinner Mitchell Santner through the covers for four.

On Sunday, they added 160 for the first wicket, here it was 123 and, just as at Edgbaston, it was Bairstow who went on to make the more telling contribution.

So often Bairstow favours the leg side, but here he crunched the ball through the covers, played delicate late cuts and launched a mighty straight six down the ground.

The Yorkshireman has now made two centuries since attracting controversy for saying people were “waiting for England to fail” – comments he has since rowed back from – and celebrated with a leap into the air.

England slowed after he dragged on to his own stumps off Matt Henry – they were actually 111-7 over the course of the last 20 overs – but Bairstow had already done enough to lift them to a winning score.

New Zealand won five of their first six games – the other rained off – but they now find themselves stumbling into their semi-final at Old Trafford on Tuesday against whichever team tops the group.

Disadvantaged by the toss and an injury to pace bowler Lockie Ferguson, they started poorly with the ball, especially Santner and the returning Tim Southee, who was punished by Bairstow.

As England ran hard, New Zealand’s fielding was sloppy, but the Black Caps gradually adjusted to the conditions and their improvement was led by the variations of medium-pacer Jimmy Neesham.

New Zealand’s real problem is a reliance on the batting of Williamson – before today he had scored more than 30% of their runs in the tournament.

For that reason, the freakish way he was dismissed was a huge stoke of fortune for England and a mortal blow to the Kiwis.

As Taylor drove straight, bowler Wood got a finger-end to the ball before it crashed into the non-striker’s stumps, with the desperate Williamson short of his ground.

In the next over, Taylor foolishly chanced Rashid’s arm attempting a second and the contest was as good as over.

England captain Eoin Morgan: “I thought we were outstanding today. It started with the two boys at the top of the order.

“They set a good solid platform playing in the manner they do. Jonny getting his hundred was match winning.

“The wicket did change after the 25th over and it did slow up. It was difficult to score. Every batsman found that so to have so many on the board was encouraging.”

Former England captain Michael Vaughan on Test Match Special: “If England win the next two tosses then I think they will win the World Cup.

“If they are in a chase I doubt whether they can play the right intelligent cricket under pressure.

“Can they win four tosses on the trot? Of course they can.”

New Zealand captain Kane Williamson: “There are a lot of variables in these games and the margins on the scoreboard have looked big but for us it is important we look at it for what it is.

“England did get the best of the conditions but they were the better team. They outplayed us in all facets. The conditions didn’t decide the result.”