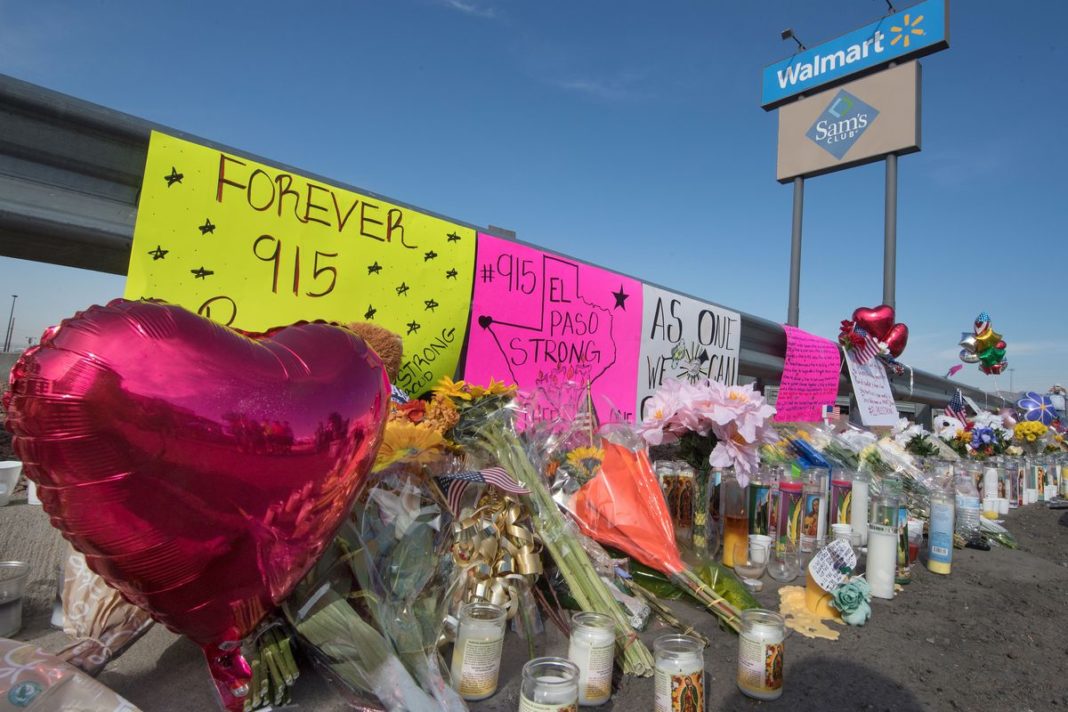 It is less than 24 hours since Gilbert Anchondo found out that his youngest son, Andre, had died in the shooting at Walmart in their hometown of El Paso.

There had been an agonising wait, as they tried his phone over and over again, being met with silence each time.

But Gilbert, already back at work in the car workshop he has run for nearly 40 years, has a message for the gunman.

“The aggressor could be my son,” he says. “I forgive him because he was not in his senses. He had the devil inside of him. I’m a great believer and I forgive what he did.”

The couple and their baby son Paul would leave their new home, which Andre had just finished building, they would drop off Jordan’s daughter, Skylin, at cheerleading practice and then run errands, usually at the Walmart store next to the cheerleading venue.

On Saturday the little girl would have been even more excited – it was her fifth birthday.

A party was planned at their house that night to celebrate Skylin’s birthday as well as the Anchondos’ wedding anniversary – and to serve as a housewarming. The couple were buying steaks for a barbecue and picking up school supplies, like many others that day. Baby Paul, only two months old, was with them, while Jordan’s other daughter, Victoria, was with her father.

Gilbert had been running late to open up his business that morning and saw the family as he drove past their house. He noted the time for some reason. It was 09:15.

“I saw my son and his wife. Jordan was closing the door. Andre was carrying his newborn baby in his arms. They were getting ready to leave.”

A little over an hour later, the first reports of a shooting would come in.

“I have a regret – I didn’t stop and give him a hug, a blessing and a kiss. But I saw them happy. I didn’t want to bother them, burst the bubble of happiness,” he said.

‘Andre wasn’t with us’

What happened next at the store is still patchy. But what is known is that a gunman entered the Walmart when it was at its busiest and started shooting.

After trying to contact Andre and Jordan, Andre’s brother Tito got a call back from a number he didn’t recognise. His number had been popping up on Jordan’s smartwatch and he was asked if he could identify her, over the phone. Then someone broke the news that she had died.

“We were in disbelief,” Tito says.

The family found out that baby Paul was in hospital. He suffered two broken fingers and has now been released to his grandparents.

It was not until the Sunday that Andre’s death was confirmed. Until then, while some still had hope, Gilbert says he had a bad feeling.

His worst fears were finally realised at a family reunification centre set up at a local school.

“They told me Andre wasn’t with us,” says Gilbert. “And then they told me I had done a good job with him, because he was a protector of his family. He had got between the bullets, flying between his wife and child. And Jordan did what she was supposed to, protecting little Paul.

“It makes me feel proud. If he died under these conditions, I can live with it.”

Tito has been told that there is surveillance footage of the couple’s final moments.

“He was actually trying to stop the gunman,” says Tito. “He lunged forward to grab the gun. Then the bullet went through him and his wife. I’m very proud of my brother. He died a hero. But I’m sad and angry about what happened.

“There are no words to describe the emotion we are feeling. It’s not a hole he’s left, it’s a void.”

Tito, who works with his father, wants to watch the footage, to see his brother’s final act of bravery for himself. He knows it will be tough, but adds: “I need to see the last moments of my brother’s life.

“I will always remember that he died giving his life to save his wife and son – and maybe even more people. He was very heroic in his acts. But he always was that way, even from when he was little.”

Gilbert adds: “He was not someone to be pushed around. He was strong, all his life.”

Tito shows off pictures of his little brother doing Taekwondo as a child. He had done some bodybuilding too – trying, says Tito, to emulate their father, a former Mr El Paso.

“He was very outgoing. We’ve always been close. We had ups and downs like anyone. It’s hard to imagine the rest of my life without him. He was a very good father, a very good brother and a very good son.”

The workshop is filled with childhood pictures of the boys and their sister, Deborah, and a handprint painting a young Andre did for his father. Gilbert says he will treasure it as the last place he will ever get to see his boy’s fingerprints.

Andre had joked that Tito’s wife became pregnant at the same time as Jordan, because Tito was trying to copy his little brother.

The two couples’ babies were born a month apart. Tito now says he wants to take on responsibility for Paul and adopt the little boy.

“I’d like to tell him – your dad died protecting your life and I want you to live up to your dad’s name, because he was a great man. I want you to be just as great as your dad was.”

All the children are too young to comprehend what has happened. But he says he is saddened that Skylin “will always remember her birthday as the day her mom died”.

The rest of the family is struggling to come to terms with Andre’s death. His mother, Brenda, is devastated, Tito says.

‘A great city, a safe city’

But they say they won’t let it change their way of life. And they are also keen to keep politics out of it.

“My brother died for his family, but people are making this political,” says Tito. The conversation shouldn’t be about race, or immigration, but about mental illness, he adds, as “the shooting is not something anyone sane would do”.

And, he points out, if the gunman was targeting the Hispanic community, then how was his sister-in-law – an American with blonde hair and blue eyes – shot?

The father and son say they back President Donald Trump in his comments on the shooting and also appreciate his support for El Paso.

“Mr Trump made a good statement. He’s making reforms and we appreciate it,” says Gilbert.

Now is the time for the city to heal.

“I want the country to learn how we coexist here,” adds Tito. “I have no fear of living in El Paso. It has always been my home town and always will be. And Andre will always be my brother. I will always love him.”

“This is not going to define us as a violent city,” says Gilbert. “This was someone from out of town.

“It is a great city, a safe city. Like any family, El Paso has its problems. But we are hardworking people from all parts of the world and we love and respect each other. The devil came into El Paso and did what he did. But this is not going to break us.”

Europeans Erect Borders Against Coronavirus, but the Enemy Is Already Within