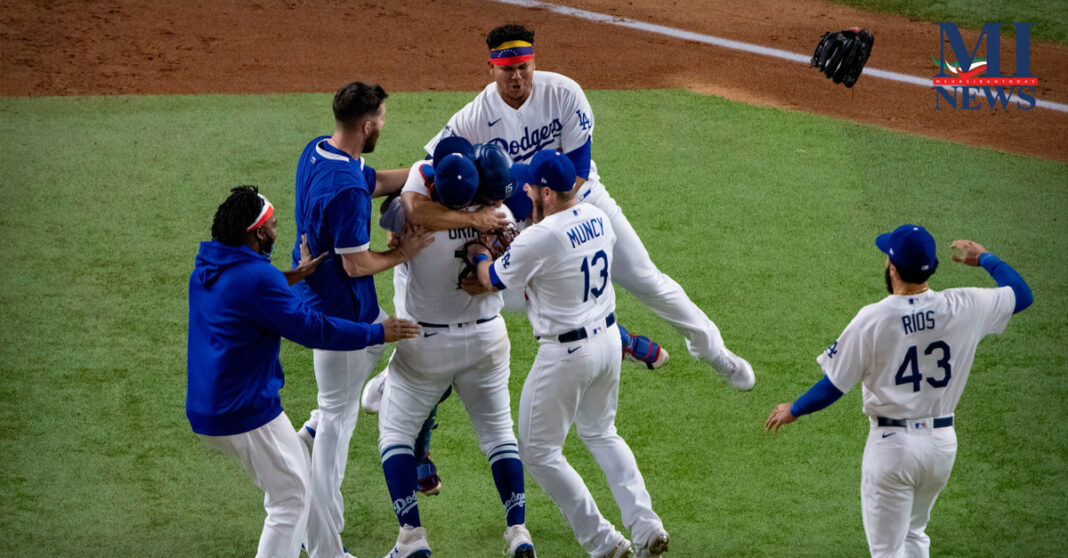 As far as championship droughts go, this was not the longest in baseball history, or even the most agonizing.

But in terms of recent effort, including nearly $2 billion spent on player salaries in the past eight years, and the frustration of being tantalizingly close to that celebratory sip of Champagne without actually tasting it, the Dodgers’ 21st century championship dry spell had become the most prominent — and baffling — in baseball.

They won seven straight divisional titles without winning the World Series. They made it to the Fall Classic in 2017, only to lose at home to a team that would later be exposed as cheaters. And the very next year they lost at home again, to a team led by Mookie Betts, now roaming the outfield for Los Angeles.

But on their eighth consecutive trip to the postseason, the Los Angeles Dodgers finally became champions, again. They beat the Tampa Bay Rays, 3-1, in Game 6 of the World Series on Tuesday at Globe Life Field in Arlington, Texas, as Betts hit a double and a home run and scored twice to help the storied franchise end 32 years of disappointment.

It was the seventh title for the Dodgers, their sixth since moving to Los Angeles from Brooklyn in 1957, and the first for Dave Roberts as a manager. The steady Roberts became only the third skipper to win a World Series with the Dodgers, joining the Hall of Famers Walter Alston and Tommy Lasorda, who was at the helm of the franchise’s 1988 championship team.

When Game 6 ended and all the pressure that had built up on this core group of players was finally released, they exploded out of the dugout and onto the field to celebrate, knowing that they would no longer be labeled choking underachievers.

“To know what it feels like to lose,” said Corey Seager, who was named the Series’ most valuable player, “and be able to rebuild and come back and rebuild and stay focused, it’s special.”

The victory should help make up for the perceived injustice of 2017, when the Dodgers lost Game 7 to the Houston Astros, a team that illicitly stole signs that year and admitted to the scheme after an investigation by Major League Baseball in 2019. The title also should soothe the pain inflicted the following year when the Red Sox, with Betts in their outfield, also won at Dodger Stadium, that time in Game 5.

And it surely quelled the anguish felt in 2019 when, after winning 106 games with a $205 million payroll, the Dodgers were bounced out of the playoffs — once again at home — in the first round by the eventual champions, the Washington Nationals.

This time was different: a postseason of unusual circumstances, the team sequestered for weeks in a playoff bubble in Texas, the players separated from their extended families and friends because of the coronavirus pandemic. The impact of the contagion even overshadowed the celebrations after Game 6, as it emerged that Dodgers third baseman Justin Turner had been removed from the game before the top of the eighth because he had received a positive test result for the coronavirus.

But through all their postseason games, the Dodgers made Globe Life Field their own. They played 16 postseason games there and hit more home runs (29) in the new stadium than the regular residents, the Texas Rangers, who hit just 27 in their 30 games there this season.

The championship reflected the Dodgers’ dedication and commitment, but it also helped that they had Betts, whom they acquired from the Red Sox in a trade in February.

“I was traded for for this reason,” Betts said. “I’m proud of myself and proud of the guys for accomplishing it.”

The superstar right fielder added a special dynamism and confidence to a lineup that was already stacked with stars like Seager, Cody Bellinger and Turner, the third baseman that the Mets gave up on before he went on to become one of the most dangerous hitters in the Dodgers’ postseason history.

And it took Roberts to bring everything together. The Dodgers’ manager since 2016, Roberts helped his players block out the simmering pressure that built to a rolling boil over nearly a decade of frustration for a passionate fan base that never seemed to give up, packing Dodger Stadium regularly despite year upon year of letdowns.

In his fifth season at the helm, Roberts directed the team to the best regular-season record in the major leagues for the second time in his tenure and helped guide them back from a three-games-to-one deficit against the Atlanta Braves in the National League Championship Series this month. But it all would have meant nothing if the team had failed in the World Series for a third time in four years.

After the Dodgers finished off the Braves, Roberts stood at a podium and, with the crack of emotion in his voice, declared: “This year is our year. This is our year.” He reiterated the same sentiment on Tuesday, this time with the World Series Trophy up there with him.

“I’ve never been around a group that is closer, tougher, and that I love more,” he said, and then credited many of the current Dodger players who had suffered through the hard losses, like Clayton Kershaw, Kenley Jansen and Turner.

It was Roberts’s approach, combined with a lineup of indisputable talent earning the second-highest payroll in baseball (behind that of the Yankees), proved too much for the Rays, a plucky, overachieving squad with a pre-pandemic opening day payroll of only $72 million, the fourth lowest in baseball.

The Series went back and forth through five games, but in the sixth, the Dodgers proved their superiority and their resilience, rallying after falling behind in the first inning.

They scraped together two runs in the sixth inning to take the lead after Rays Manager Kevin Cash made a pitching change that will be debated for years.

Blake Snell, Tampa Bay’s starter, was dominating the Dodgers and led, 1-0, after five innings. He recorded the first out in the sixth, but after he gave up a single to the No. 9 batter, Austin Barnes, on his 73rd pitch, Cash bounced out of the dugout and removed Snell in favor of Nick Anderson.

Snell’s body language suggested he could not believe he was coming out, but Cash had made up his mind. He said he was concerned about the Dodgers catching up to Snell in their third at-bats against him, even though Snell had struck out Betts, Corey Seager and Turner twice each.

Asked if he regretted the move, Cash said, “Yeah I guess I regret it because it didn’t work out. But the thought process was right.”

The results were not. When Betts saw Snell leave, he looked at Roberts in the dugout and gave him a little smile.

“We were all just kind of excited that Snell was out of the game,” Roberts said.

Betts hit a double off Anderson, who then threw a wild pitch, allowing Barnes to score as Betts went to third. He then scored on a fielder’s choice.

Betts’s homer came off Pete Fairbanks in the eighth inning, and as he pumped his fist while rounding the bases, decades of Dodger frustration seemed to melt away.

Their ability to bounce back over the years was encapsulated within this postseason, including the N.L.C.S. and the World Series. The Dodgers had lost in shocking fashion on Game 4 on Saturday, when the Rays scored two runs on a pair of fielding mistakes with two outs in the ninth inning.

But Los Angeles came back to win Game 5 the next day behind Kershaw, their star pitcher who has faced criticism in recent years for failing to reproduce his regular-season success when the calendar turned to October, and Kershaw won both of his Series starts to become a champion for the first time.

“I’m so happy for my wife, the sense of relief that we finally did it,” Kershaw said, “and for my whole family, and the people that are happy for me. It’s overwhelming just to see the support.”

It was also the first title for Andrew Friedman, the former general manager of the Rays and the president and architect of the Dodgers for the past six years.

Freidman’s job was to spend lavishly, to win at almost any cost, and the Dodgers were consistently in a position to do exactly that. It took a little longer than expected, but Roberts sensed their time had come.

“I had a crazy feeling that came to fruition,” he said. “I just knew that we weren’t going to be denied this year.”

The Mookie Betts Trade Already Looks Like One of Red Sox’s...