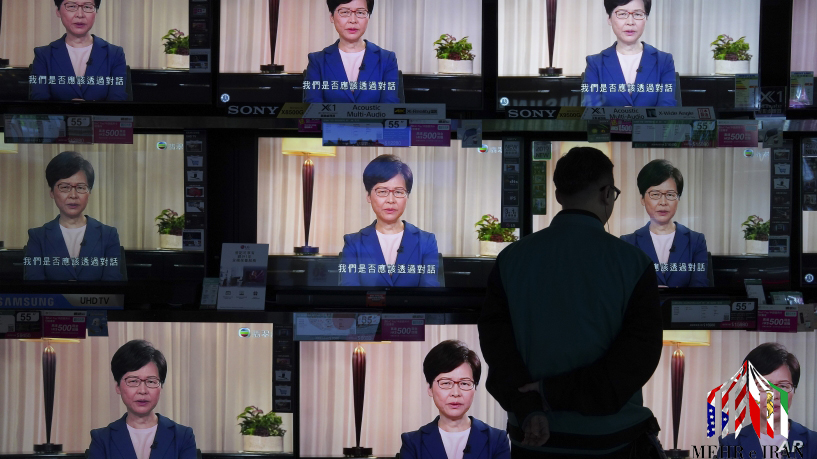 In a videotaped message released Wednesday by her office, Lam said she was withrawing the bill, which would have would have permitted criminal suspects to be sent to mainland China for trial in courts controlled by the ruling Communist Party, “to fully allay public concerns.”

Lam suspended the bill as the demonstrations escalated during the first month, but ignored calls to fully withdraw the measure. In making Wednesday’s surprise decision, Lam acceded to one of five demands made by the protesters, which include an independent probe into allegations of police brutality and the long-stated goal for greater democracy for the Chinese-controlled territory.

The demonstrations have brought everyday life in the Asian financial hub to a near halt, with protesters disrupting activities at the city’s subway system and airport. Hundreds, if not thousands of protesters have been arrested after clashes with police wielding batons and firing tear gas and water cannons.

But veteran Hong Kong pro-democracy activist Joshua Wong told reporters after Lam’s address that the decision to pull the legislation was “too little, too late.”

Wednesday’s announcement comes just days after Lam was heard in an audio recording obtained by Reuters telling Hong Kong business leaders that she had caused “a huge havoc” when she introduced a controversial extradition bill that sparked the protests. In the recording, which is available online, she tells the group, “If I have a choice, the first thing is to quit, having made a deep apology, is to step down.”

Protest leaders took the remarks to mean that officials in Beijing would not permit her to resign. But Lam told reporters Tuesday she “had not even contemplated” discussing a resignation with Chinese leaders. When asked specifically if Beijing was stopping her from resigning, Lam said she has “never tendered a resignation to the central people’s government.”

She said she doesn’t know how long it will take to end the civil disobedience, but that she remains confident of restoring law and order. She dismissed speculation that Beijing is anxious to resolve the crisis by Oct. 1, the 70th anniversary of the People’s Republic of China.

Curfews may not be enough to keep the peace as tension...