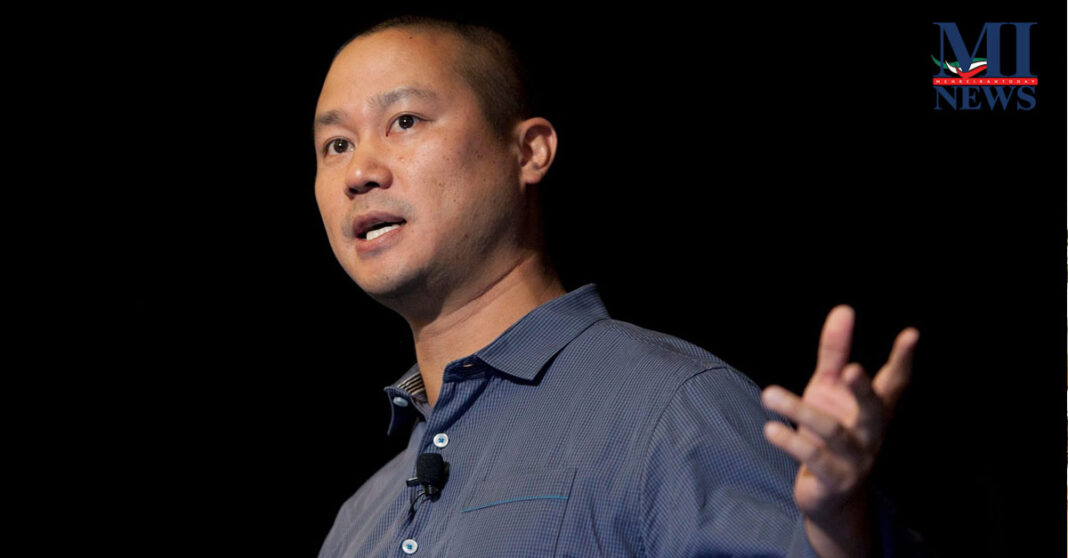 Colleagues of the recently retired Zappos founder who died days after being rescued from a fire in New London, Conn., fear his alleged habitual consumption of nitrous oxide and alcohol could have fed the blaze or prevented him from escaping it, according to a recent report.

“In recent months the nitrous oxide had become as important to Tony as his alcohol,” said a colleague, who was not identified in the report. “And Grey Goose vodka was his best friend.”

Megan Fazio, a spokesperson for Hsieh and his DTP Companies, said Wednesday she does not typically comment on Hsieh’s personal matters, but added: “You’ll note positivities are attributed to a source while speculative comments remain anonymous.”

“It is speculative and reckless to comment on the potential cause of what was ruled an accident in an ongoing investigation,” Fazio said in an email to Fox News. “These anonymous sources should perhaps look at doing the latter, especially while family and friends are grieving the loss of a visionary, mentor and friend. The facts remain, the unfounded commentary and speculation from anonymous sources will continue to evoke a ‘no comment’ from our team.”

The New London Fire Department would not comment on anything further than what had already been released publicly.

Nitrous oxide is said to “increase the intensity of fire,” according to the National Oceanic and Atmospheric Administration.

“He would take dozens of them a day,” the colleague told the Mail. “He lived a crazy, eccentric life. The drugs often made him hallucinate, he became paranoid.”

Hsieh, who had recently retired from the e-commerce shoe giant, was previously described by Vanity Fair as a “consummate partier, throwing frequent events at the office to celebrate everything from meeting sales targets to ringing in the Chinese New Year with a horse (a live horse!) to taking shots of Grey Goose, just because.”

The anonymous colleague told the Daily Mail that Hsieh’s alleged use of drugs and alcohol “was known by everyone around him.”

“The talk among his former colleagues at Zappos is that Tony was likely in the shed blacked out drunk and on drugs,” they continued.

Hsieh was also allegedly known to light candles as a way to “set the atmosphere,” according to the colleague.

The New London Fire Marshal’s Office and the New London Police Department’s Investigative Services Division are investigating the circumstances of the blaze.

Hsieh was on the property of a three-story, New London, Conn., house at the time of the Nov. 18 fire. While others were able to get out in time, the former tech exec was inside a “shed that’s attached to the exterior of the house” and did not, or could not, escape, according to police and fire radio recordings.

Reports have varied as to whether he was “trapped” or if he was instead “barricaded,” both of which are descriptions provided in the recordings from responders at the scene.

“The male is barricaded inside,” one person can be heard saying in the recording that was archived by Broadcastify. “He’s not answering the door. Everyone else is outside the house they’re trying to get him to open up.”

On Monday, the New London Police Department released details about the way in which Hsieh was found, describing how they initially received a report of “a structure fire with a person trapped inside.”

“Upon arrival on the scene, emergency service personnel observed dark smoke emanating from the back of the residential structure,” police said. “Individuals at the scene informed emergency personnel that a man, who was later identified as Anthony Hsieh … was locked inside a storage area where smoke was coming out at the rear of the residence, and they were unable to get him out.”

First responders were able to break the storage room door and pulled Hsieh from inside, police said. He was first taken to Lawrence + Memorial Hospital before being relocated to Bridgeport Hospital’s Burn Center.

The magnate succumbed to his injuries on Friday. The state’s office of the chief medical examiner has since ruled the death accidental and caused by smoke inhalation.

A spokesperson for the office did not immediately respond to Fox News’ questions about whether a toxicology examination was being conducted.

The Wall Street Journal reported the $1.3 million waterfront property on Pequot Avenue was owned by Rachael Brown, which is also the name of a Zappos employee who is “among his closest confidants,” according to the Las Vegas Review-Journal.

Local affiliate FOX61 cited sources in reporting that Hsieh bought the home for Brown in August. The news station spoke with one of Hsieh’s assistants, Anthony Hebert, who said his boss was in town with relatives and his “soulmate,” but did not provide additional details.

The Daily Mail previously reported that one of his brothers was staying in the home with him at the time, though it was not clear if Brown was with them.

Hsieh retired from Zappos over the summer after 20 years leading the company. The online shoe retailer shared a tribute on social media late Friday.

“The world has lost a tremendous visionary and an incredible human being,” the statement said. “His spirit will forever be a part of Zappos.”

Hsieh was a Harvard University graduate who joined the company – then called ShoeSite.com – in 1999. Zappos was sold to Amazon for $1.2 billion in 2009, but Hsieh had remained with the company until his retirement.

Oil prices surge 4% after Iran military leader killed in US...