Since he first intervened in the Wuhan coronavirus crisis in late January, ordering “all-out efforts” to contain its spread, Chinese President Xi Jinping has been personally directing the country’s response.

At least, that’s what state media has been repeatedly emphasizing — Xi himself has not been seen for several days, missing from his usual place of prominence on the front page of the state-owned People’s Daily newspaper and in the nightly newscast on state broadcaster CCTV.
This is weird, not only because a country’s leader is normally front and center during a crisis, but because Xi typically dominates media coverage at the best of times, regardless of how seemingly routine his activities are. Since he came to power in 2012, the People’s Daily especially has become known for running multiple headlines about Xi and plastering not only the front page but several after it with nearly identical pictures of him shaking hands with various officials.
Xi’s vanishing act has not gone unnoticed in China, where many are asking questions on social media — most of which are swiftly deleted by censors. Outside of the country, particularly among dissident communities, rampant speculation is growing, as those desperate to see the back of Xi spread wild, wholly unfounded claims.
Nor is this the first time “Xi is missing” has become a story. When an authoritarian government concentrates power around a single figure, the way China has around Xi during the past eight years, even the slightest removal of that figure from the spotlight will spark a degree of chatter. 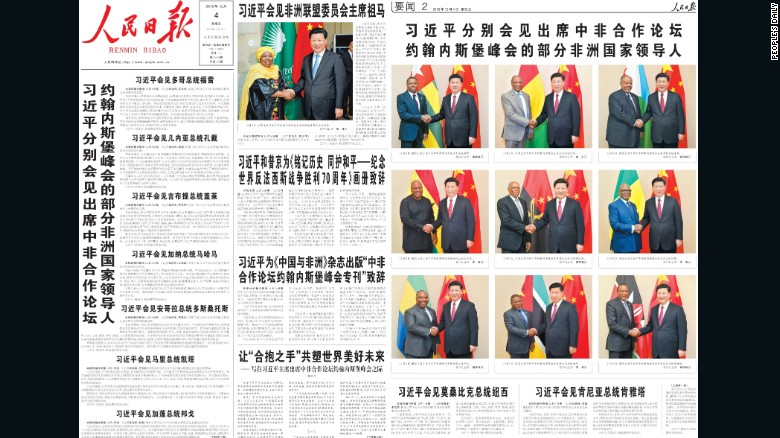 The December 4, 2015 front page of the People’s Daily had 11 headlines mentioning Xi Jinping.

So what’s behind Xi’s absence?
The internal workings of the Chinese Communist Party (CCP) can be a black box at the best of times, but there are a number of theories that make sense.
Chief among those is that Xi has retreated from the spotlight in order to set up other officials to take the inevitable blame for a crisis that — even if the government maintains control over it and eventually succeeds — is already causing major economic and societal misery.
Xi is the most powerful Chinese leader since Mao Zedong, but he’s also uniquely vulnerable due to the way he has centralized control — absolute power brings with it absolute responsibility.
Officials in Wuhan are the most obvious fall guys for the crisis, and several have already offered to resign. But as the virus continues to spread across China and the world, they might not be a big enough scalp to allay public anger.
One figure who might be feeling nervous at the moment is Chinese Premier Li Keqiang. Most analysts agree that Li has been majorly sidelined by Xi in recent years, stripped of many responsibilities and pushed into more of a ceremonial role. Yet he has suddenly been pushed to the fore of this crisis, helming a national response group and visiting Wuhan itself.
Chinese social media has been full of speculation over whether Li has been placed under quarantine since returning from the stricken city. If this theory is correct, that may turn out to be the least of his worries.
The way Xi’s invisible hand is being played up in state media would seem to support this. He seems to be working diligently in the background, overseeing and guiding all efforts, without actually appearing at the forefront of any — therefore minimizing his direct connection to those efforts should they fail.
“The central government may be still in an active process in gauging when it’s appropriate for Xi to appear to take the reins of the coronavirus fighting efforts,” said Rui Zhong, a China expert at the Wilson Center. 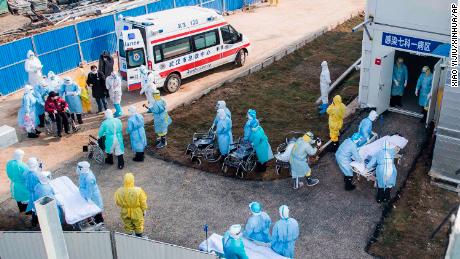 Protecting the core
Following a key meeting of top officials Monday, state news agency Xinhua said Xi emphasized the need for “public opinion guidance,” which would “better strengthen confidence, warm people’s hearts, and gather people’s hearts.”
As the person who — by dint of his position — does ultimately bear the brunt of the blame, it is important for the country’s propaganda apparatus not to allow this to happen. Xi instead is being framed as the only person who can solve the crisis and get China back on the path to greatness that he’s been promising since coming to power.
In a front page editorial Tuesday, the People’s Daily said the battle against the coronavirus was a “people’s war” that would only be won so long as the country “unites more closely around the Communist Party with comrade Xi Jinping as the core.”
Similarly, Xinhua said that Xi has been “personally directing and personally planning” all efforts to contain the outbreak, and because of this, everything is being done effectively and orderly. 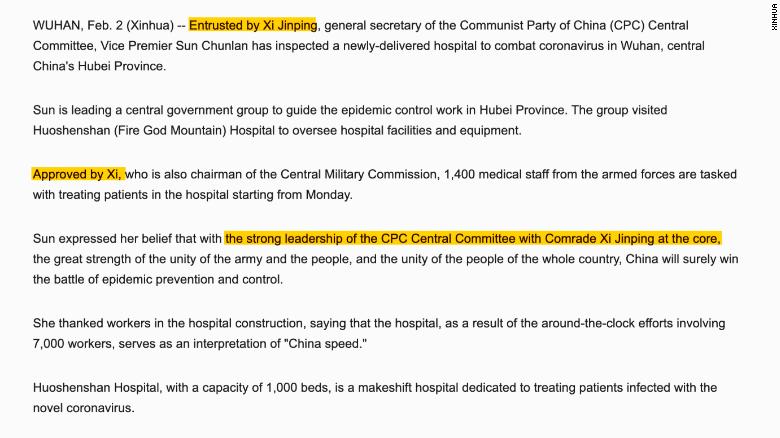 A short story about the activities of another top Chinese official nevertheless mentioned President Xi Jinping multiple times. Other coverage has repeatedly emphasized that he is directing all response to the Wuhan virus.
Bill Bishop, a longtime independent China analyst, wrote this week that “one of the key political tasks of all party members is to protect the core, i.e. Xi Jinping.”
“While you would think the ‘people’s leader’ would want to be seen close to the people perhaps in this case the risk of him catching the virus may be too high, and images of him wearing a mask might be anathema to the propaganda wizards,” he added.
Such risky public relations tasks have instead been delegated to more expendable officials like Li, the sidelined premier.
As the propaganda ground is cleared for Xi to be seen to be taking control and, most importantly, succeeding in the fight against the Wuhan virus, there are signs that negative stories are being downplayed and doctors and other experts are being pressured not to speak out so much. Reporters in Hubei have also spoken of being pressured to rein in their coverage, after an initial flurry of media attention turned up numerous embarrassing oversights by the Wuhan government.
While she understood the need for positive stories so people don’t despair, Zhong said that there was a real risk that the desire to present a positive front could have negative repercussions for those directly affected by the virus.
“Since the quarantine is challenging people’s endurance, maintaining long-term social confidence is probably a top priority,” she said. “I’m really worried that the stories of people struggling to get resources or treatment will take a back seat to the ever present priority of political stability, positive energy, etc.”
Original Source