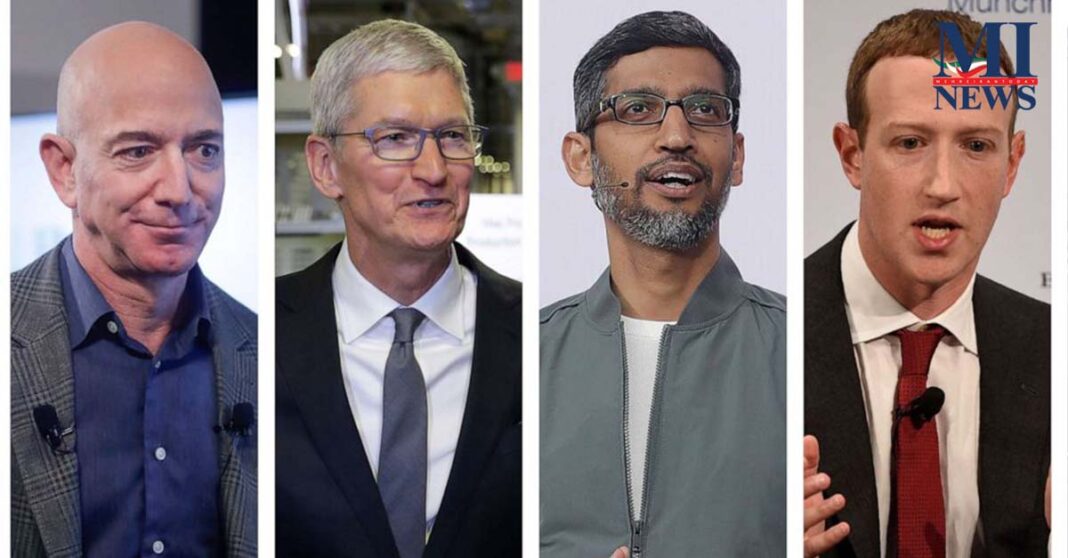 The chiefs of four of the biggest tech companies in the world — Amazon, Apple, Facebook and Google — will face lawmakers Wednesday for a hearing on digital competition that could have cataclysmic impacts on an industry largely unhindered by regulators.

The grilling of tech titans Jeff Bezos, Tim Cook, Mark Zuckerberg and Sundar Pichai (the companies’ respective CEOs), will be done by the House Judiciary Antitrust Subcommittee as part of its ongoing, year-long investigation into competition in the digital market.

Antitrust Subcommittee Chairman David Cicilline, D-R.I., kicked off the hearing with opening remarks, saying the “purpose of today’s hearing is to examine the dominance of Amazon, Apple, Facebook and Google.”

“Prior to the COVID-19 pandemic, these corporations already stood out as titans in our economy, in the wake of COVID-19, however they’re likely to emerge stronger and more powerful than ever before,” he added.

“As American families shift more of their work shopping and communication online, these giants stand to profit. Locally owned business, meanwhile, Mom and Pop stores on Main Street face an economic crisis unlike any in recent history,” Cicilline said. “As hard as it is to believe it is possible that our economy will emerge form this crisis even more concentrated and consolidated than before.”

He argued that the dominance of the four tech giants is thus hurting the U.S. economy as a whole.

12:25 p.m.: Hearing delayed slightly as room is being cleaned

The highly anticipated hearing, which was scheduled to start at noon, is off to a delayed start Wednesday as the room is being cleaned.

Wednesday’s hearing is taking place in the same room where Attorney General William Barr testified for five hours Tuesday. Tuesday’s hearing was attended by Congressman Louie Gohmert, a Texas Republican who has tested positive for the coronavirus, a source told ABC News Wednesday.

Despite the delay, a few masked-up lawmakers have already taken their positions on the dais including Rep. Matt Gaetz, R-Fla., Rep. Jim Jordan, R-Ohio, and Rep. Mike Johnson, R-La.

12:07 p.m.: Trump calls for action from Congress on Twitter ahead of the hearing

President Donald Trump shared some thoughts via Twitter ahead of the hearing, writing, “If Congress doesn’t bring fairness to Big Tech, which they should have done years ago, I will do it myself with Executive Orders.”

He continued: “In Washington, it has been ALL TALK and NO ACTION for years, and the people of our Country are sick and tired of it!”

5 a.m.: CEOs release their opening remarks, here is what is expected today

Lawmakers have said Wednesday’s hearing will be a part of the House Judiciary Antitrust Subcommittee’s ongoing, year-long investigation into competition in the digital market.

“Given the central role these corporations play in the lives of the American people, it is critical that their CEOs are forthcoming,” House Judiciary Committee Chairman Jerrold Nadler, D-N.Y., and Antitrust Subcommittee Chairman David Cicilline, D-R.I., said in a joint statement earlier this month announcing the hearing.

“As we have said from the start, their testimony is essential for us to complete this investigation,” the statement added.

The subcommittee has been investigating the industry dominance of a small number of digital platforms and the “adequacy of existing antitrust laws and enforcement” since last June, Nadler and Cicilline said.

Notably, this will be the first time Amazon’s CEO Bezos — the richest man in the world according to Forbes’ realtime data on billionaires — will be in the hot seat testifying before Congress. Amazon has also been at the fore of the subcommittee’s investigation. Lawmakers are expected to ask about, among other things, reports that Amazon used sensitive business information from third-party sellers on its platforms, according to a statement.

In lengthy prepared remarks released Tuesday night, Bezos described Amazon’s early days and its rise to success. He also defends the company’s place in the e-commerce world and its impact on the economy.

“There are now 1.7 million small and medium-sized businesses around the world selling in Amazon’s stores,” Bezos wrote. “More than 200,000 entrepreneurs worldwide surpassed $100,000 in sales in our stores in 2019. On top of that, we estimate that third-party businesses selling in Amazon’s stores have created over 2.2 million new jobs around the world.”

The CEO expressed confidence in his business, saying, “I believe Amazon should be scrutinized.”

“We should scrutinize all large institutions, whether they’re companies, government agencies, or non-profits,” Bezos said. “Our responsibility is to make sure we pass such scrutiny with flying colors.”

Apple’s App Store has also been the subject of antitrust scrutiny, and last month officials in the European Union officially launched an investigation on whether the distribution of apps on its store potentially violate EU competition rules.

In his prepared remarks, Cook described Apple’s origin and said the company’s success “is only possible in this country.”

“Apple does not have a dominant market share in any market where we do business,” Cook said. “That is not just true for iPhone; it is true for any product category.”

He also said that they have never raised the commission or added a single fee to the App Store since it debuted more than a decade ago.

“I share the Subcommittee’s belief that competition is a great virtue, that it promotes innovation, that it makes space for the next great idea and that it gives consumers more choices,” Cook said.

Facebook’s power and reach has been the subject of multiple past congressional hearings, and many of the key points raised in the past will likely come up again especially as the 2020 presidential election nears and the social media giant has pledged it won’t make the same mistakes it did in 2016.

In prepared remarks released ahead of the testimony, Zuckerberg said he would talk about how Facebook is a “proudly American company” that believes in the same values “that the American economy was built on.”

He said that the company would “not have been possible without U.S. laws that encourage competition and innovation.”

Zuckerberg also defended Facebook’s ownership of Instagram and WhatsApp, saying Facebook made the other two apps “successful as part of our family of apps” and argued that Facebook’s infrastructure made these apps better.

Finally, Zuckerberg argued that the tech companies shouldn’t be the ones having to make these judgments.

“I understand that people have concerns about the size and perceived power that tech companies have,” Zuckerberg said. “Ultimately, I believe companies shouldn’t be making so many judgments about important issues like harmful content, privacy, and election integrity on their own. That’s why I’ve called for a more active role for governments and regulators and updated rules for the internet.”

Google’s dominance in the online advertising world is also expected to come up, amid mounting media reports that a Department of Justice antitrust suit against Google over its ad businesses could be forthcoming.

Pichai defended in his prepared words how Google Ads and other tools have helped small businesses.

“Online has been a lifeline for so many businesses, especially during the global pandemic,” Pichai wrote. “Nearly one-third of small business owners say that without digital tools they would have had to close all or part of their business during COVID.”

He concluded that they are committed to working with lawmakers to “protect consumers, maintain America’s competitive technological edge in the world, and ensure that every American has access to the incredible opportunities that technology creates.”

The hearing, which will be livestreamed, is scheduled to start at noon and the guests are expected to appear virtually as a result of the coronavirus pandemic.

These U.S. states are hit hardest by Trump’s tariffs