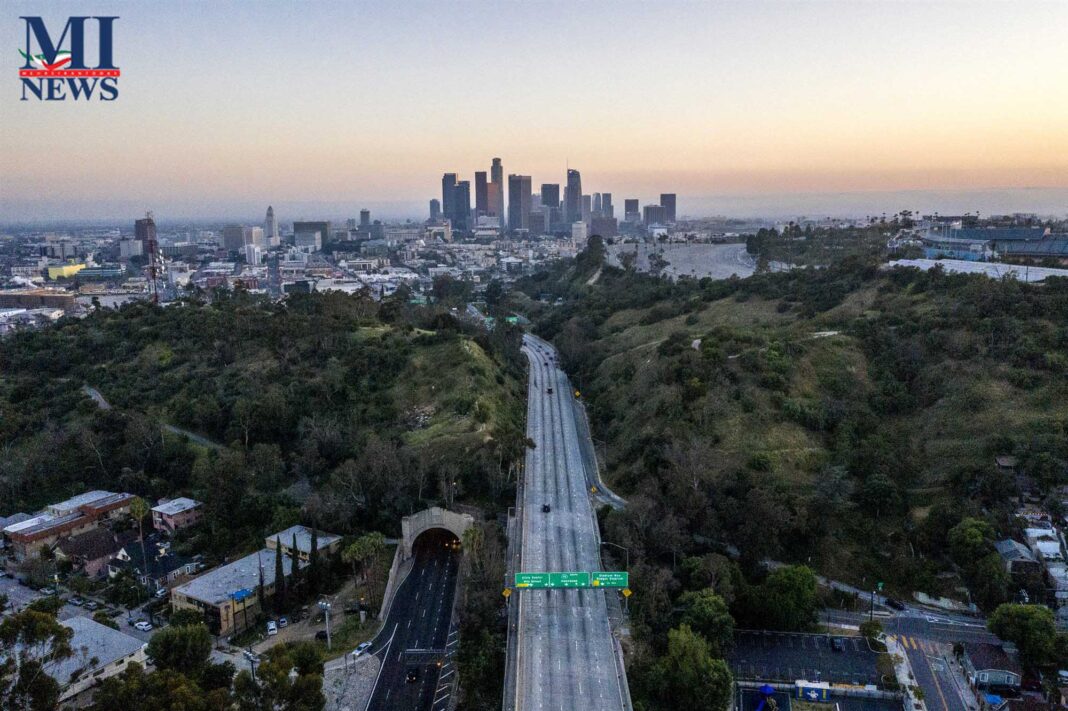 The coronavirus pandemic has forced countries around the world to enact strict lockdowns, seal borders and scale back economic activities. Now, an analysis published Tuesday finds that these measures contributed to an estimated 17 percent decline in daily global carbon dioxide emissions compared to daily global averages from 2019.

It’s a worldwide drop that scientists say could be the largest in recorded history.

At the height of coronavirus confinements in early April, daily carbon dioxide emissions around the world decreased by roughly 18.7 million tons compared to average daily emissions last year, falling to levels that were last observed in 2006, according to the new study, published in the journal Nature Climate Change.

Drastic changes in transportation, industrial activities and air travel in nations under lockdowns could also fuel a decrease in this year’s annual carbon emissions of up to 7 percent, the study found. Though significant, scientists say these declines are unlikely to have a long-term impact once countries return to normal unless governments prioritize investments and infrastructure to reduce harmful emissions.

“Globally, we haven’t seen a drop this big ever, and at the yearly level, you would have to go back to World War II to see such a big drop in emissions,” said Corinne Le Quéré, a professor of climate change science at the University of East Anglia in the U.K., and the study’s lead author. “But this is not the way to tackle climate change — it’s not going to happen by forcing behavior changes on people. We need to tackle it by helping people move to more sustainable ways of living.”

The study found that the sharpest decline in carbon emissions — making up 43 percent of the total decrease — came from reduced traffic from cars, buses and trucks. Emissions from industrial activities, which were ramped down substantially in the hardest-hit nations, fell by 19 percent.

Emissions from air travel, which experienced a staggering 75 percent drop in daily activity in early April, fell by 60 percent. That decline, however, made up a much smaller portion of the overall decrease because air travel typically accounts for only 2.8 percent of yearly global carbon emissions.

“Air traffic was down two-thirds, but surface transport — cars and trucks — is almost 10 times bigger in terms of emissions,” said Rob Jackson, a professor of Earth system science at Stanford University and a co-author of the study.

The pandemic will likely also cause this year’s annual carbon emissions to drop by between 4 percent to 7 percent, depending on how long strict social-distancing measures remain in effect and how quickly economies rebound.

In early April, the deepest decreases in daily global carbon emissions — 17 percent declines compared to daily averages last year — lasted for about two weeks, according to Jackson. Individual countries saw an average drop in emissions of 26 percent at the peak of their lockdowns, which occurred earlier for several countries in Asia, where the coronavirus emerged in late December, and more recently for parts of Europe and North America.

The study did not account for how global emissions could be affected by new outbreaks and subsequent wave of infections, but it’s likely that such events could lead to steeper declines in emissions this year and possibly into 2021.

“If the outbreak lasts longer, we’ll have more depressed economic activity in 2021,” said Zeke Hausfather, a climate scientist at the University of California, Berkeley, who was not involved with the new study. “It’s likely at this point that 2021 emissions will be below 2019 emissions but higher than 2020, unless things take a turn for the worse.”

In the new analysis, the researchers examined lockdown measures in 69 countries that are responsible for 97 percent of global carbon dioxide emissions. Since there is no way to measure carbon dioxide emissions in real time, the scientists used data on how six key economic sectors, including industrial activities, ground transportation and air travel, were affected in each country from January through April. They then calculated how emissions in these sectors, and their contribution to yearly emissions, changed based on the severity of each nation’s social-distancing restrictions.

The scientists did estimate a 2.8 percent increase in emissions from residential buildings during this time, likely from people working from home and consuming more electricity in households, Le Quéré said. It’s possible, she added, that this bump could increase if the pandemic lingers through the summer and homes in the U.S. and elsewhere in the Northern Hemisphere ramp up use of air conditioning.

Though declining emissions make for unexpected good news against the backdrop of the pandemic, these reductions have come at a high societal cost. The changes are also unlikely to last once restrictions on people’s movements and daily lives are lifted. And though these declines are largely unparalleled in modern history, they also demonstrate how difficult it is to make significant dents in global emissions.

“Despite all of the changes that are happening around the world to our lifestyle and consumption behaviors, we’re only going to see a reduction of 7 percent this year,” Hausfather said. “It goes to show just how big a challenge decarbonization really is.”

Before the pandemic, global carbon dioxide emissions had been increasing by approximately 1 percent a year over the past decade. A drop in emissions in one year is something, but it’s not enough to slow the accelerated pace of climate change.

“Carbon dioxide stays in the atmosphere for a very long time, so climate change is driven more by the total amount we’ve ever emitted than any amount we emit in a single year,” Hausfather said. “From a climate standpoint, what really matters is long-term systemic changes that can drive emission declines over decades.”

Decreases from 4 percent to 7 percent are roughly in line with how much global emissions would need to fall each year to keep global warming below 1.5 degrees to 2 degrees Celsius, as outlined under the 2015 Paris climate agreement.

“We would have to have the same speed of reduction that’s happening in 2020 every year for the next decade,” Hausfather said.

But Le Quéré said she hopes the study’s findings will encourage countries to think about solutions that promote economic recovery without sacrificing climate action.

“We’re at a crossroads,” she said. “It’s about governments having vision and being forward thinking. What society do we need to build tomorrow to reduce the risks of more disasters?”

There is cause to be optimistic, Jackson said, because some of the environmental changes from the coronavirus pandemic could be readily seen or felt.

“The most obvious change was the beautiful blue skies we saw from India to Indiana,” he said. “People can relate to that more than abstract discussions about greenhouse gas emissions — you could just see that skies were clear.”

Biden staff tells ’60 Minutes’ he misspoke on cost of free...