The police body camera videos are disturbing. They show two Orlando police officers arresting 6-year-old Kaia Rolle as she pleads with officers for a “second chance.”

“Help me,” Kaia says between sobs as her hands are restrained with a zip tie.
“You can tell me what happened in the car, OK?” one officer responds as he begins to walk her outside.
“I don’t want to go to the police car,” Kaia said while she wept. “Please.” 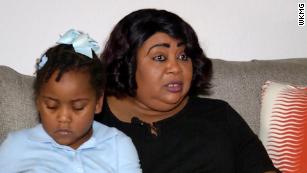 “Please, please,” Kaia continued to sob as an officer put her in the back of his police SUV. “Please let me go.”
CNN does not normally identify juveniles in such cases, but the family has spoken openly about her.
The videos show one officer going back into the office and chatting with several office staff members. He told them that he had arrested 6,000 people in 28 years and that Kaia had “broken the record,” because until that day the youngest person he had arrested had been 7.
Two body camera videos of the incident were released to CNN Tuesday by the Smith & Eulo Law Firm, the attorneys representing Kaia Rolle. But the arrest happened on September 19, 2019, following what had reportedly been a temper tantrum by Kaia at The Lucious and Emma Nixon Academy.

According to written statements made by the principal, the assistant principal and two school staff members in September 2019 and obtained by CNN, the incident began at about 8:10 a.m. Kaia Rolle was screaming and pulling on a classroom door because she wanted to wear her sunglasses.
The assistant principal observed this and led Kaia to the office while the child was “kicking and screaming.”
“Kaia became aggressive hitting me with her hands in the chest and stomach area,” the assistant principal wrote in the statement. “I restrained her by holding her forearms.”
Meralyn Kirkland, the child’s grandmother, told CNN Kaia had been acting out because she was experiencing the side effects from sleep apnea, that the school was aware of the issues and that the family was working to get the issues resolved.
From the statements, it’s unclear when exactly the resource officer was called to intervene. But the statements from one staff member and the school principal reference interactions between Kaia and the resource officer.
The school resource officer tried to “calm her but Kaia would not listen,” said a staff member.
“He tried to get her to sit down but she wouldn’t,” the principal’s statement said. Portions of the principal’s handwritten statement are hard to decipher. Like this one: “He told her that he would take her to ja__ if she didn’t stop misbehaving and hitting.”
At one point, the officer asked administrators to call Kaia’s family. “After about 10 minutes [the principal] was able to calm Kaia down,” the statement from the staff member read.
The videos released to CNN by the family attorney start off with Kaia Rolle calmly reading a book with a teacher in an office and do not show the temper tantrum described in the handwritten statements.
While the police report says the assistant principal wanted to press charges and would testify in court, the statement the assistant principal gave to police at the time and obtained by CNN does not show an initial by the box: “I will testify in court and prosecute criminally.”
In a statement issued by Lucious and Emma Nixon Academy on September 24, 2019, Kaia’s school wrote, “Never did anyone within our organization request or direct the School Resource Officer to arrest this student.” CNN reached out to the school Tuesday asking for comment regarding the release of the videos and has not heard back.

One of the officers has been terminated

The Orlando Police Department apologized to the family and terminated one of the two police officers in the videos, shortly after reviewing the incident in September 2019. The second officer in the videos was “exonerated” after an “investigation revealed that he notified his supervisor multiple times about concerns with the arrest but was never given instruction not to proceed with the prisoner transport.”
And in a statement to CNN at the time Orlando Police said, “the arrest of any person under the age of 12 requires the approval of the Watch Commander, which was not obtained in this case.” The statement went on to say, “The 6-year-old was released from custody and returned to the school prior to being processed at the Juvenile Assessment Center.”
CNN tried to obtain the records independently from the Orlando Police Department and was sent a statement saying the “records remain confidential and exempt from disclosure as a public record.”
“These statutes were written with the intent to protect juvenile subjects from unwanted disclosure of their information,” the statement attributed to the Orlando Police Legal Advisor Alex Karden said.
The statement from police also referenced that the former school resource officer had arrested another child in a separate incident. In 2019, Orlando Police Chief Orlando Rolon spoke briefly about the arresting officer’s history, which included a personal incident involving his own children years ago. But Rolon said he could not go into the details.
CNN has reached out to the former school resource officer for comment and has not been able to reach him.
State Attorney Aramis Ayala did not pursue the misdemeanor battery charges against the child and during a press conference in September said, “Very young children ought to be protected, nurtured and disciplined in a manner that does not rely on the criminal justice system.”

Kaia Rolle’s family debated for almost a month about whether to release the body camera videos, according to Smith & Eulo Law Firm, the attorneys representing Rolle.
Their biggest worry, the law firm says, was that Kaia would have to re-live the nightmare given that she is still “traumatized” and in “therapy.
“It’s tough for her to go to school. Every time she sees an officer she freaks out,” a member of the Smith & Eulo Law Firm told CNN.
But ultimately the family decided to release the videos for at least three reasons, explained the firm.
First, the family felt it was important for the public to see the “severity” of what actually happened.
Second, the family would like the Orlando Police Department to acknowledge they dropped the ball when they decided to arrest a child.
And finally, the family would like to draw attention to the case because they want to rally support for a bill going through the Florida legislature that would raise the arrest age to 12. Senate Bill 578 was introduced January 14 by state Sen. Randolph Bracy III.

The child still has nightmares

Kaia’s grandmother told CNN by phone that she is speaking out in support of the bill because she doesn’t want another child to suffer the trauma of getting handcuffed and put in the back of a police car — as the videos of her granddaughter’s arrest so vividly shows.
“I’m really hurt because they stole her childhood from her,” Kirkland said.
Kirkland says that for a week and a half following the arrest, Kaia would not leave her side. And the first time she tried taking her to school, Kaia had a meltdown inside the car as they drove up to campus because she saw a uniformed officer on the grounds.
“Grandma they are waiting to arrest me again,” Kirkland remembers Kaia saying between sobs.
Kirkland called a therapist who recommended Kaia not be forced to go to any school with a uniformed police officer.
With a 2019 Florida law mandating that a uniformed police be present at every public school in the state, Kirkland says she was forced to find a private school for Kaia. But Kirkland says she couldn’t afford to pay for private school. After four months and thanks to a scholarship, Kirkland says she shored up enough money to have Kaia attend private school with no resource officer on campus.
While Kaia sleeps well now after undergoing surgery for sleep apnea in October, Kirkland says that her granddaughter still has nightmares.
Original Source

US House to Vote Friday on More Virus Aid, Despite Republican...