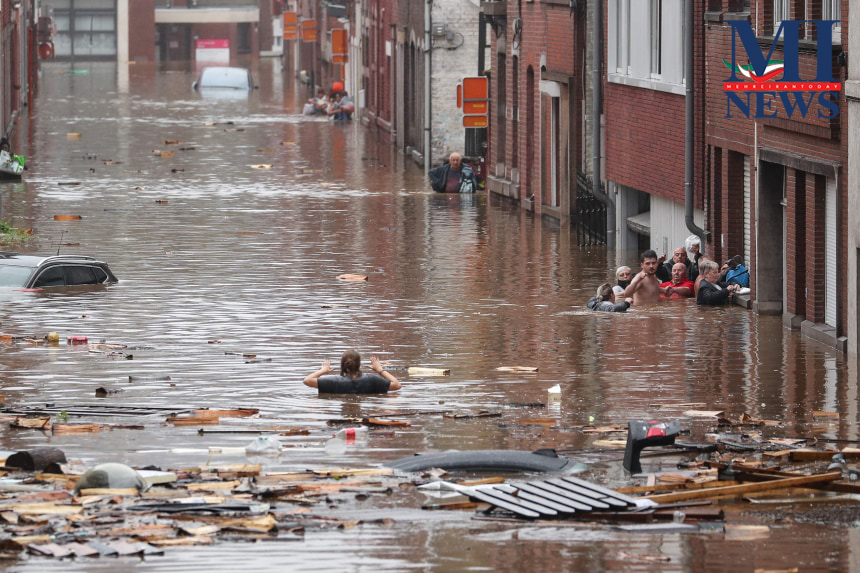 Heavy flooding in western Europe left dozens of people dead, with more missing and many stranded on rooftops.

Storms brought torrential rain Wednesday that caused rivers to burst their banks and sent torrents of water sweeping through cities and villages in Germany, Belgium and elsewhere across the region.

Authorities in Germany declared an emergency as the floods there killed at least 40 people, swept away cars and caused buildings to collapse.

“It’s a disaster. There are dead, missing and many who are still in danger,” Malu Dreyer, premier of the western state of Rhineland-Palatinate, said. “All emergency services are on duty around the clock and risk their own lives.”

Police in the western city of Koblenz, southeast of Cologne, said at least 18 people had died in Ahrweiler county, with dozens more reported missing or trapped on the roofs of their houses awaiting rescue.

Authorities used inflatable boats and helicopters to identify and rescue those left stranded in the floods, and the German army deployed 200 soldiers to assist in the rescue operation, which was hampered by blocked roads and phone and internet outages.

In the western county of Euskirchen, south of Cologne, authorities said Thursday that at least eight people had died in connection with the floods.

An official death count in the village of Schlund has yet to be updated by police in Koblenz and currently stands at four.

However, the police said at least six houses had collapsed overnight in the community and that “many people have been reported missing to us.”

Meanwhile, authorities in the Rhine-Sieg county just south of Cologne ordered several villages to be evacuated due to fears that a nearby dam could break.

The full extent of the damage caused by the flooding is still unclear, with floodwater and landslides cutting off access to villages and roadways.

Major highways were inundated in southern and eastern parts of the country, and the railway said all trains were halted.

In neighboring Belgium, the Vesdre River broke its banks and sent torrents of water churning through the streets of Pepinster, close to Liege, its destructive power bringing down some buildings. Four people died in eastern Verviers, local media reported. No independent confirmation was immediately available.

In eastern Eupen, which sits on the German border, a man was reported dead after being swept away, a local governor told RTBF network.

France has also seen heavy rains, while parts of London and southern England were hit with torrential rains and floods earlier this week.

The German weather service DWD has predicted that heavy rains would ease Thursday.

Meanwhile, high temperatures of 86 degrees Fahrenheit or higher were expected Thursday in parts of northern Europe.

Wednesday into Thursday was the hottest night in the area’s history, the Finnish weather service company Foreca said Thursday, with the mercury reaching 75.6 degrees Fahrenheit.

The floods have caused Germany’s worst mass loss of life in years.

It comes as German Chancellor Angela Merkel is in Washington to meet with President Joe Biden in what looks to be her final visit to the White House before she steps down this fall.

“I grieve for those who have lost their lives in this disaster,” she said, expressing shock at the scope of the flooding. “We still don’t know the number. But it will be many.”

She also pledged that everything would be done to find those missing. “‘Heavy rain and flooding’ doesn’t capture what happened,” she said.

Armin Laschet, the conservative candidate looking to replace her as chancellor in elections this year, visited regions affected by the flooding and blamed global warming.

“We will be faced with such events over and over, and that means we need to speed up climate protection measures, on European, federal and global levels, because climate change isn’t confined to one state,” said Laschet, who serves as the governor of North Rhine-Westphalia.

“Many people lost everything that they own after the mud flowed into their homes,” he said, after cutting short a campaign stop in Bavaria to visit Hagen, an area hit hard in the catastrophe.

Green Party co-leader Annalena Baerbock, who is running against Laschet to become the next chancellor, also linked the extreme weather to the climate crisis.

“Political answers are finally needed here,” she said on Twitter.

“My thoughts are with the families of the victims of the devastating floods in Belgium, Germany, Luxembourg and the Netherlands and those who have lost their homes,” she said in a tweet. “The E.U. is ready to help.”

Greta Thunberg, the climate activist, tweeted that the extreme weather of recent days should not be regarded as “the new normal.”

“We’re at the very beginning of a climate and ecological emergency, and extreme weather events will only become more and more frequent,” she wrote.