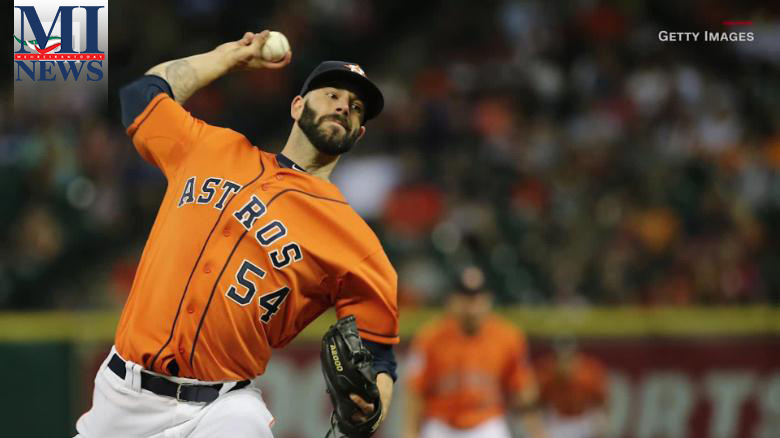 The Houston Astros’ Jose Altuve smashed a two-run, walk-off homer off the Yankees’ closer Aroldis Chapman with two outs in the bottom of the ninth last October.

The towering shot in Game 6 of an American League Championship Series sent the Yankees home in shock and propelled the Astros to the World Series.
As Altuve rounded third base, he held his jersey together tightly and signaled to teammates not to rip it off in celebration.
Now, video of that moment is fueling unsubstantiated speculation surrounding Major League Baseball’s sign-stealing scandal, with social media posts suggesting Altuve and other Astros wore electronic devices under their jerseys to know what pitches were coming.
In a statement, MLB said it “explored wearable devices” during its sign-stealing probe “but found no evidence to substantiate it.” The investigation included the 2019 season, MLB said.
The national pastime has been reeling since Monday, when MLB announced it had found the Astros illegally created a system that decoded and communicated the opposing teams’ pitching signs during their 2017 championship season.
CNN has sought comment from Altuve and his agent, Scott Boras.
“I have never worn an electronic device in my performance as a major league player,” Altuve said in a statement Boras released to the New York Post.
During an interview on FOX after his dramatic October home run, Altuve was asked why he didn’t want his jersey ripped off.
“I’m too shy,” he said. “The last time they did that I got in trouble with my wife.”
MLB commissioner Rob Manfred said in a statement that the investigation into the Houston’s sign stealing “revealed no violations of the policy by the Astros in the 2019 season or 2019 postseason.”
On Thursday, Carlos Beltran’s managerial career with the New York Mets ended before it began when he stepped down for his involvement in the scandal.
“We met with Carlos last night and again this morning and agreed to mutually part ways,” Mets COO Jeff Wilpon and Mets Executive Vice President and General Manager Brodie Van Wagenen said in a statement.
“This was not an easy decision. Considering the circumstances, it became clear to all parties that it was not in anyone’s best interest for Carlos to move forward as manager of the New York Mets.”
Beltran becomes the third big-league manager out of a job because of the controversy.
“At a meeting this morning with Jeff and Brodie we mutually agreed to part ways,” Beltran said in a statement.
“I’m grateful to them for giving me the opportunity, but we agreed this decision is in the best interest of the team. I couldn’t let myself be a distraction for the team.”
Beltran, the only Astros player named in Manfred’s report, was an outfielder and designated hitter for Houston in 2017. The mention of his name in the report was brief — on the second of nine pages. He was the only player named.
“Approximately two months into the 2017 season, a group of players, including Carlos Beltran, discussed that the team could improve on decoding opposing teams’ signs and communicating the signs to the batter,” the commissioner wrote.
Beltran denied wrongdoing in the scheme in a November story in The Athletic.
A key figure in the sign stealing scandal, Alex Cora, led the Red Sox to a World Series title in 2018 as manager and was the Astros’ bench coach in 2017. On Tuesday Cora and the Red Sox announced they “mutually agreed to part ways.”
Manfred handed one-year suspensions to Houston manager AJ Hinch and general manager Jeff Luhnow this week. Houston Astros owner and chairman Jim Crane then fired both.
Manfred said disciplining individual players was “difficult and impractical” because virtually the whole team was involved or had knowledge of the scheme and many players now play for other clubs.
MLB said Cora had arranged for a video room technician to install a monitor displaying the center field camera feed outside of the Astros’ dugout.
One or more players watched the live feed of the center field camera on the monitor, and after decoding the sign, a player would bang a nearby trash can with a bat or a massage gun to communicate the upcoming pitch type to the batter, according to the report.
Manfred said Cora’s discipline will be decided following a separate investigation into the Red Sox.
The Red Sox illegally used a video replay room during 2018 regular-season games to decipher the signs of opposing catchers, three unnamed sources who were with the franchise that year told The Athletic. Red Sox officials said they’re cooperating with MLB.
Original Source

Antonio Brown’s ex-girlfriend asks him to get help after police issue...