Home News As Protests Continue In Iraq, Shiite Leader Calls On Other States To... 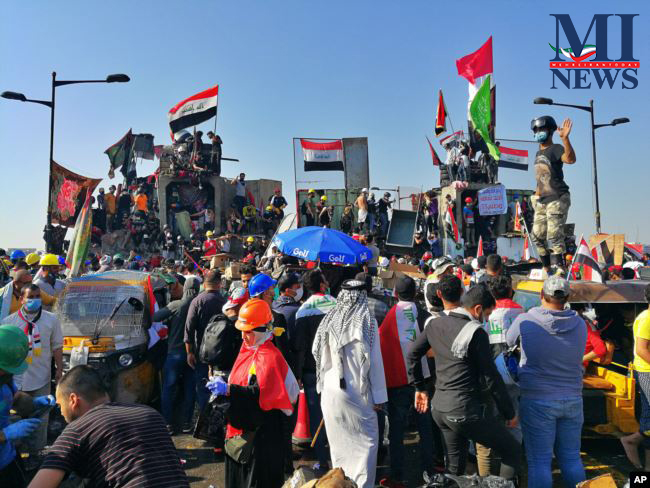 As the biggest protests got underway in Iraq on Friday, the country’s most influential Shiite cleric warned of “civil conflict, chaos and destruction” if the security forces or paramilitary groups attack protesters.

Thousands of protesters gathered in Baghdad to demand wholesale change of the political system and leadership, on the one-month anniversary of the protests. Many Iraqis say they are tired of bad economic conditions as the political elite gets rich and leaves masses in poverty.

Thousands have been camped out in Baghdad’s central Tahrir Square, with many thousands more joining them by day. Friday, the Muslim day of prayer, was expected to draw the biggest crowds yet, with many taking to the streets after worship.

“No one person or group or side with an agenda, or any regional or international party, can infringe upon the will of Iraqis or force an opinion upon them,” Sistani’s representative said during a sermon in the holy city of Kerbala.

But Iraq’s protesters also see Iran as behind the current political leadership and have directed some of their ire at Tehran and militias it financially backs in Iraq.

“The leadership is controlled by Iran,” a protester told Reuters. “When we make demands we shouldn’t even talk to the government, we should talk to Iran. We don’t have a government.”

Reuters had also reported this week that a powerful Iran-backed faction had considered abandoning Prime Minister Adel Abdul Mahdi, but decided to keep him in office after a secret meeting attended Iran’s Revolutionary Guards Qods force commander Qassem Soleimani. An Iranian security official confirmed to Reuters that Soleimani had attended Wednesday’s meeting, saying he was there to “give advice”.

But protesters say even the resignation of the prime minister will not be enough. They see the possible resignation not as a major change and believe the political elite will choose another person committed to the current system.

So far, more than 150 people have been killed and thousands wounded as security forces backed by pro-Iran militia have used a dangerous type of teargas and live ammunition against the protesters.

Iran’s Role In Violence Against Protesters In Iraq And Lebanon

Amnesty International said on Thursday security forces were using “previously unseen” tear gas canisters modeled on military grenades that are 10 times as heavy as standard ones.

Reuters reported that in Baghdad protesters were re-directing traffic and cleaning the streets. A protester who is an engineering graduate said he square had become a model for the country he and his comrades hope to build: “We are cleaning streets, others bring us water, they bring us electricity, they wired it up.”

There were also protests in other parts of the country, specially the pre-dominantly Shiite southern regions. This is another noteworthy aspect of Iraq protests that the members of the pre-dominant religious group are driving the movement – not disgruntled minorities, such as the Sunnis.

US coronavirus cases top 402,000, with more than 13,000 deaths. But future projections are better than expected

Dr. Birx sees encouraging signs, but warns people of second wave if they start going out

April 8, 2020
The US war against coronavirus has taken devastating turns this week. But with more people taking social distancing seriously, researchers predict the coming months...

April 8, 2020
Dr. Deborah Birx, White House coronavirus response coordinator, said Wednesday that there are encouraging signs that parts of the U.S. may be flattening their curves but...

April 8, 2020
As the Chinese city that was the original center of the coronavirus outbreak came out of lockdown with a celebratory light show, the U.S. registered its...
0FansLike
0FollowersFollow