Home Politics After more than 48 hours of silence, Pompeo says State will investigate... 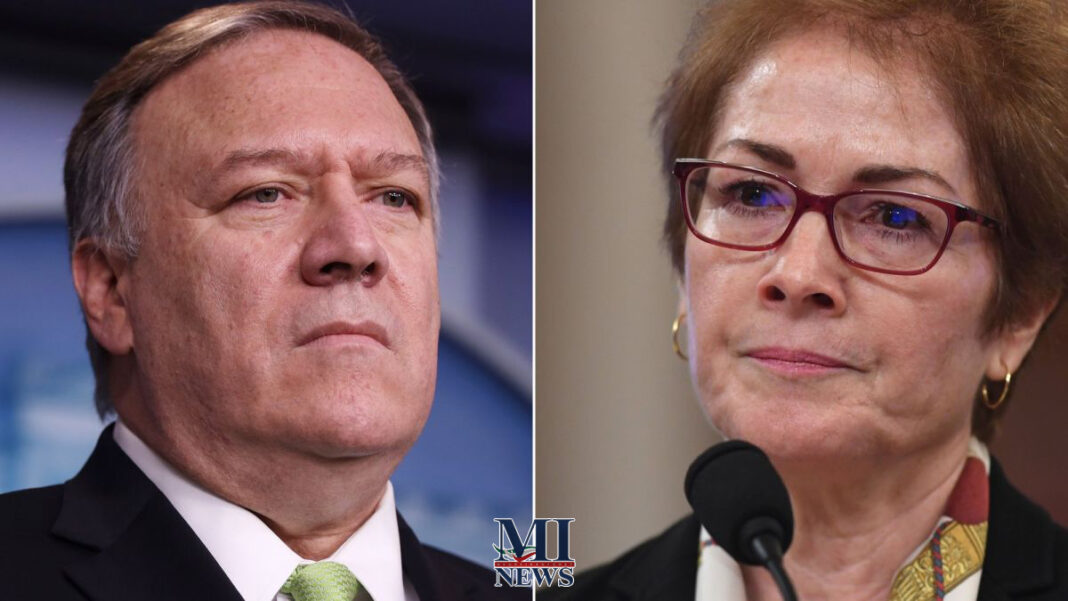 Secretary of State Mike Pompeo on Friday publicly committed to look into the possible surveillance of former US Ambassador to Ukraine Marie Yovanovitch — more than 48 hours after the evidence of potential monitoring emerged and more than 24 hours after Ukraine announced its own investigation into the matter.

“We will do everything we need to do to evaluate whether there was something that took place there,” Pompeo told conservative radio host Tony Katz.
“I suspect that much of what’s been reported will ultimately prove wrong, but our obligation, my obligation as secretary of state, is to make sure that we evaluate, investigate. Any time there is someone who posits that there may have been a risk to one of our officers, we’ll obviously do that,” Pompeo said.
Pompeo’s comments Friday were the first public acknowledgment of an inquiry into Yovanoviitch’s potential monitoring while serving in Kiev, although a senior State Department official told CNN that the investigation was officially launched by State Department’s Bureau of Diplomatic Security on Tuesday night.
In a separate interview on Friday, Pompeo said he was not aware of the possible surveillance.
“Until this story broke, I had, to the best of my recollection, had never heard of this at all,” Pompeo told Hugh Hewitt.
Texts released earlier this week by House Democrats that were turned over to them by indicted Rudy Giuliani associate Lev Parnas show Connecticut Republican congressional candidate Robert Hyde berating Yovanovitch and suggest he was monitoring her while she was in Kiev and relaying her movements to Parnas. Hyde declined to comment to CNN when asked if he had surveilled Yovanovitch, who served as a key witness in the House impeachment probe into President Donald Trump.
Pompeo told both radio shows that he did not believe he had ever met Parnas.
“I’ve not met this guy, Lev Parnas, to the best of my knowledge. I’ve never encountered, never communicated with him,” he told Tony Katz.
The secretary of state did not offer words of support for Yovanovitch personally, but said that “it is always the case at the Department of State that we do everything we can to ensure that our officers, not only our ambassadors but our entire team, has the security level that’s appropriate.”
“We do our best to make sure that no harm will come to anyone, whether that was what was going on in our embassy in Baghdad last week or the work that was going on in Kyiv up and through the spring of last year when Ambassador Yovanovitch was there, and in our embassy in Kiev even today,” he told Tony Katz.
Asked if the impeachment hurts American interests abroad, the top US diplomat said his team is “very focused” and again referred to the matter as “noise.”
“I’ve done my best to make sure that everybody here knows that we’ve got a mission that’s ongoing, and to make sure that we tell our partners and friends around the world that, too,” he told Hewitt. “We do our best to make sure that everyone’s focused on the things that really matter.”
The new evidence of the potential monitoring of the ambassador was released to the public on Tuesday evening.
“F**k that bitch,” Hyde wrote to Parnas in one message, writing the next day, “Wow. Can’t believe Trumo (sic) hasn’t fired this bitch. I’ll get right in that.”
In another, he relayed to Parnas, “Wake up Yankees man. She’s talked to three people. Her phone is off. Computer is off. She’s next to the embassy. Not in the embassy. Private security. Been there since Thursday.”
“They are willing to help if we/you would like a price.” he said in another message. Hyde told CNN Tuesday there was “no effing way” that he had been offering to harm Yovanovitch.
Original Source