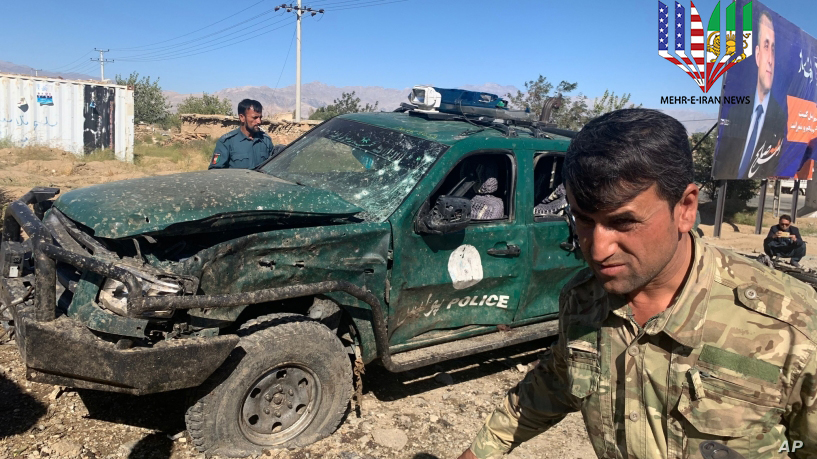 ISLAMABAD – Afghanistan’s President Ashraf Ghani escaped an attack on his campaign rally in Parwan province that killed 24 people and wounded more than 30 others Tuesday.

The president was about to address the rally when a suicide bomber on a motorcycle detonated his explosives near the military facility where the gathering was held. Nasrat Rahimi, a spokesman for Afghan Ministry of Interior, tweeted that no one inside the building was harmed and the rally continued after the incident.

The Afghan Taliban have taken responsibility for the attack, warning people to stay away from rallies and election related gatherings, promising to carry out further attacks on election activity.

“If despite the warnings they go to such meetings and get harmed, it is their responsibility,” a message from Taliban spokesman Zabiullah Mujahid said.

The Taliban also claimed responsibility for a bombing attack just hours later near the U.S. Embassy in the capital, Kabul, killing 22 people.

Afghan security forces work at the site of a suicide attack near the U.S. Embassy in Kabul, Afghanistan, Sept. 17, 2019.

Afghans are expecting a higher level of violence in the run up to the Sept. 28 election due to a breakdown in peace talks between the United States and Taliban earlier this month.

The insurgent group has intensified its regional outreach, taking a trip first to Moscow and more recently to Iran.

“The main purpose was to explain our position on the recent developments in the peace process and the agreement that has already been completed,” said Taliban spokesman Suhail Shaheen, referring to an agreement between the insurgents and a U.S. team led by Special Representative on Afghanistan Reconciliation Zalmay Khalilzad.

Khalilzad had indicated that the two sides had agreed “in principle” to a deal and that he was waiting for his boss, President Donald Trump, to approve it. As both sides waited for a date to be announced for the formalization of the agreement, President Trump unexpectedly tweeted that the talks were over because of a Taliban attack that had killed a U.S. soldier.

The peace talks had continued after previous U.S. solider deaths in Afghanistan.

Shaheen, the Taliban spokesman, said the group had little idea why the U.S. backed out, saying that they contacted Khalilzad’s team after the tweet.

“We wanted them to tell us why they finalized everything and agreed to sign it within a week, and quite unexpectedly backed out,” he said, adding that they did not receive an answer.

Still, he added that his side was willing to sign the already negotiated deal if the U.S. changed its mind but would continue to fight if the U.S. wanted to continue the war.

He also confirmed that they were in touch with other countries as well, like China and European and Central Asian countries, and would visit them if invited

“Regional countries want to know what happened, and why?” he said.

Mueller hearing: Are we learning anything new?