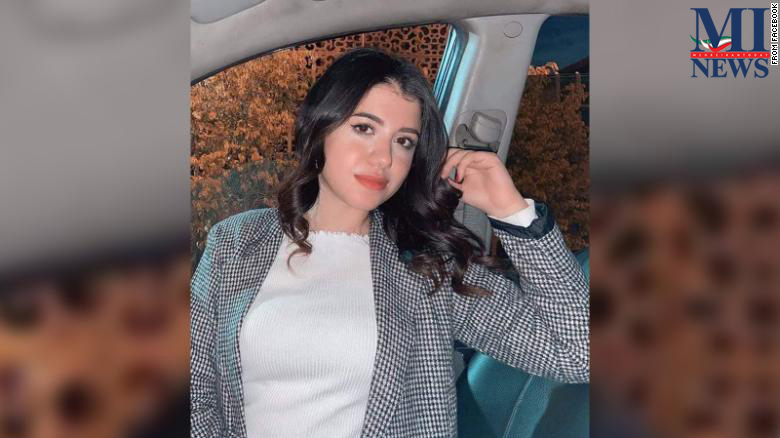 The brutal killing of a young woman in broad daylight on an Egyptian street has shocked the Arab world, bringing the country’s gender-based violence crisis into the spotlight.

Naira Ashraf, 21, was fatally stabbed on Monday by a man whose advances she rejected, according to Egyptian prosecutors who said the suspect was arrested outside northern Egypt’s Mansoura University, where the incident took place and where Ashraf was studying.
Video from a nearby CCTV camera showing a man attacking a woman outside the university went viral across the Arab world this week. A lawyer for Ashraf’s family confirmed to CNN that the video shows the incident in which Ashraf was killed.
The Egyptian prosecution said that the suspect had been referred to the criminal court and will stand trial for premeditated murder. The first court hearing is scheduled for Sunday. CNN could not reach the suspect or his family for comment, and it was not immediately clear whether he had an attorney.
Women’s rights experts in Egypt say that the problem of gender-based violence is widespread in the country, and that a number of social and legal shortcomings continue to hamper proper action.
“Definitely, Naira’s killing was not an isolated incident,” Lobna Darwish, gender and human rights officer at the Egyptian Initiative for Personal Rights (EIPR), told CNN. “[But] we are [now] seeing more coverage of violence against women.”
Data is lacking since such incidents are not properly documented by the state, Darwish said, but cases of abuse are seen in the news on an almost monthly basis. “We are seeing patterns that are alarming,” she added.
The Arabic equivalent of the hashtag #Justice_for_Naira_Ashraf has been widely trending across Arab countries since the killing.
“We need a law that fights violence,” said Azza Suliman, an Egyptian lawyer and chairwoman of the Center for Egyptian Women and Legal Assistance. There also needs to be a discourse around women that is respectful and dignifying in order to create trust between women and the state apparatus, she added.
The slain woman’s father, Ashraf Abdelkader, told CNN that the suspect had asked to marry her several times but was rejected. The suspect had also allegedly created fake accounts to follow her on social media, he added. Eventually Abdelkader filed for a restraining order in April.
“She did not want to get married, she wanted to follow her career … and wanted to be a flight attendant,” Abdelkader said.
Darwish said that the victim and her family exhausted all measures to protect Ashraf, “and yet again, the whole system — whether social or legal, failed.”
Suliman said that for women to feel comfortable reporting such incidents, there is a need to “rehabilitate the channels for justice, which include the police, judges, and the prosecution.”
Some responded to the killing by laying the blame on the victim. A controversial former TV host, Mabrouk Atteya, said in a video on social media that women “should cover up” to stop men from killing them.
“Women and girls should cover up and dress loosely to stop the temptation… if you feel like your life is precious, leave the house completely covered up to stop those wanting you from slaughtering you,” Atteya said in a live stream.
Atteya’s comments sparked outrage on social media and spurred a social media campaign calling for his arrest.
Darwish noted that while Egypt is moving forward with tougher sexual harassment laws, enforcement is still lacking among both police and society, which in turn discourages many women from seeking legal assistance.
Egypt’s State Information Services did not respond to CNN’s request for comment. Egypt’s National Council for Women could not be reached.
Harassment is illegal in Egypt, and in June of last year, the state tightened sexual harassment laws, raising fines and extending prison sentences, according to state media.
The United Nations Development Program in 2019 ranked Egypt 108 out of 162 countries measured on gender inequalities in health, empowerment and economic activity.
Last year, nine women were prosecuted on charges of violating family values after they posted videos in which they danced and sang and invited millions of followers to make money on social media platforms, Reuters reported.
“When the state supports this kind of discourse in any way by criminalizing women for the way they dress or how they present themselves, it gives a green light for these people,” Darwish said, referring to men who put the onus of modesty and morality on women.
“This happens a lot,” said Darwish, referring to violence against women. “Just not on camera.”