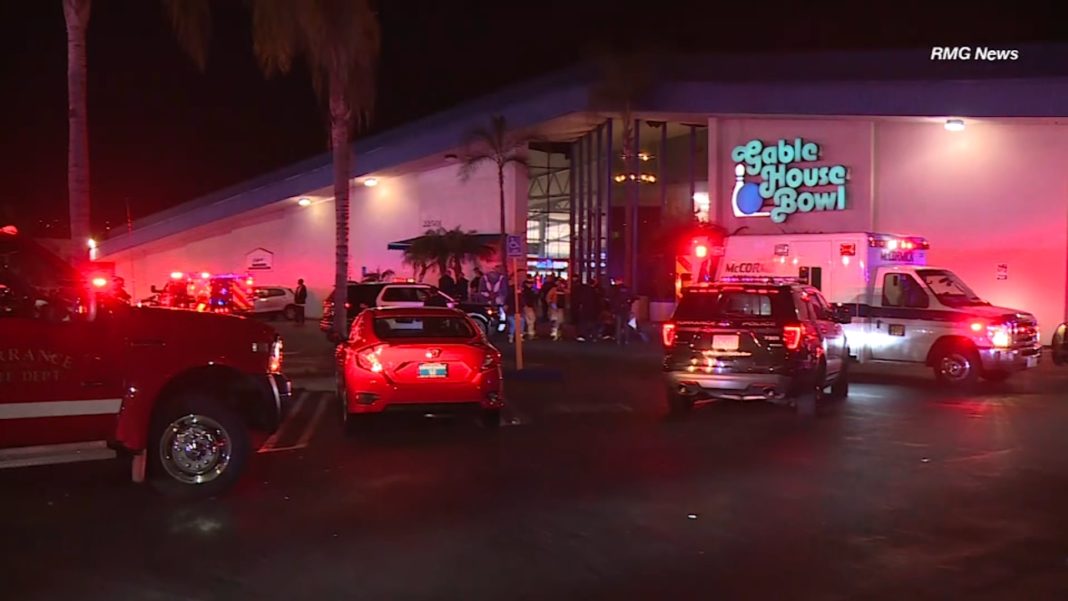 Officers found multiple people with gunshot wounds inside the location. Three male victims were pronounced dead at the scene. Officials did not immediately release their names, but family members identified the deceased as Michael Radford, 20, and Astin Edwards and Robert Meekins, both 28.

Two others were transported to a local hospital for their injuries, while two more opted to seek their own medical attention, Torrance Police said.

There were no reports of injuries to employees of the business.

Police said they were working to identify the suspects involved in the shooting.

According to witnesses, the shooting stemmed from a brawl at the bowling alley.

Wes Hamad, a 29-year-old Torrance resident, was with his 13-year-old niece and cousin when he saw a “huge fight” break out. Hamad said the altercation, which lasted about five minutes, blocked the entrance of bowling alley and turned into “complete chaos.”

“I grabbed my niece and started running toward the far end of the bowling alley,” he said. “As we were running, we heard 15 shots.”

Hamad said he saw a woman crying over a man who had multiple gunshot wounds in his head and neck.

Cellphone video shows a chaotic scene as police and firefighter-paramedics treated the wounded.

Another witness, Dana Scott, said a group of women got into a fight inside the building. As they were fighting, men got involved, and about a minute later, gunshots erupted.

“Bowlers were diving under the benches,” Scott recalled. “The people that were still bowling on the lanes were on the floor, underneath the seats, behind the benches.”

Scott said an employee “grabbed us and took us behind the bar” to escape the gunfire.

In an emotional interview, Meekins’ mother said he was survived by his 5-year-old son.

“My son was a loving person. He loved life, and he loved his family,” she said. “Oh, my God … Nobody can imagine what I’m going through right now.”

A GoFundMe was created for Meekins. If you would like to donate, you may do so by clicking here.

Gable House Bowl is described on its website as a gaming venue that offers bowling, laser tag, and a full arcade.

Anyone with information about the incident is asked to call the Torrance Police Department at (310) 328-3456.

Ceremony to Remember Those Killed in Pearl Harbor Attack

US Scanning Cyberspace for Signs of Iranian Aggression